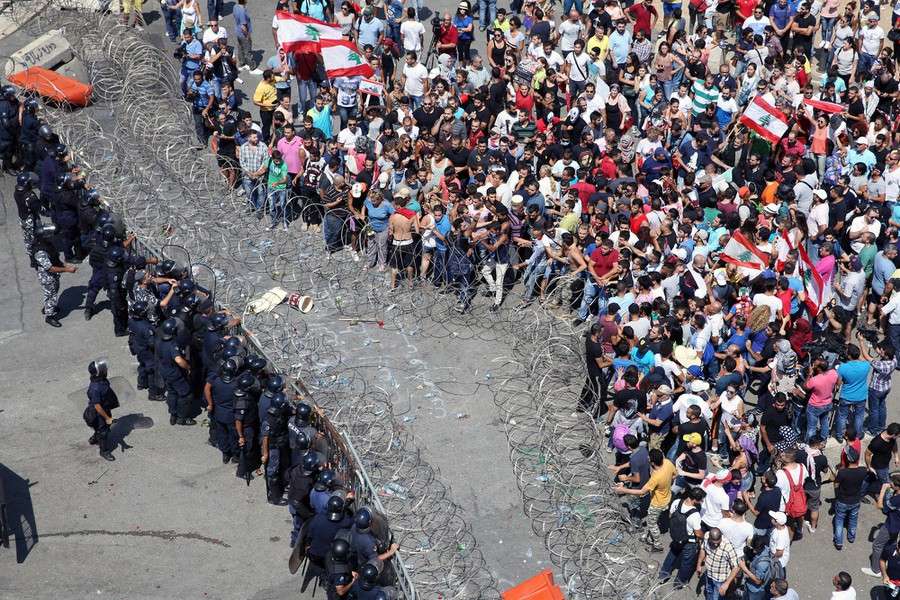 Successive governments in Lebanon have wriggled out of taking action towards the economic and political crisis, whichled the country to further deterioration. In the meantime, Human Rights violations have exacerbated the crisis in the country, says Euro-Mediterranean Human Rights Monitor.

The report covers a set of crises in the country; electricity and economic crisis, the crisis of the American University Hospital (AUH), the dollar and currency crisis, and the calamity of Beirut explosion.

Humanitarian and living conditions the Lebanese people are going though is the main reason behind sparking the ongoing public protests from 17th October 2019.

In its report, Euro-Med Monitor covers the various violations Lebanese parties committed in order to end these protests. In addition, the report includes statementsand an explanation of the committed violations from a legal perspective.

Using figures and statistics, the report showcases various topics: humanitarian and living condition, the developments of public protests along with eyewitnesses’ testimonies by activists who wereassaulted, including violations committed against them.

According to forensic medical reports, injures and assaults were recorded among the protestors. Additionally, the report addressed the crisis of foreign labor, particularly, the Syrian and Palestinian refugees.

The report notes that Lebanese media is both extremely politicized and polarized because all broadcasting and TV stations function as promotional tools for some political parties or even businessmen.

The Lebanese Chamber of Deputies is activating the national media council, where the media becomes the most important reference, in light of refusal to cancel the General Security’s censorship of foreign publications.

The Judiciary functions as a legal tool that is going after mass media and journalists who monitor powerful religious and political figures. However, security elements have changed their way of dealing with journalists by using direct assaults since the start of the public protests in Lebanon.

Lebanon used to be among a few Arab countries that recognize and respect the rights of journalists. However, it now violates the rights of the press and journalists. In addition, the Lebanese state tries to impose capitalism and quotas on what is left of the media sector, which does not belong to any political parties.  According to the Lebanese Press Syndicate, more than 80 various violations were committed against journalists and the press during public protests. In light of these violations, the Lebanese authorities wage a war against anyone who highlights the corruption in the state.

The report calls attention to the legal perspective regarding all the various violations that the Lebanese security forces commit against journalists, the press and peaceful protestors, including violations against the right to freedom of opinion and expression, the freedom of the press, and the freedom of peaceful assembly. In addition, it covers the unlawful and preventive detentions, and defamation.

Likewise, Lebanese banks have to abide by the banking legislation and the provisions of the Lebanese law that ensure the protection of depositors.

Authorities have to stop detaining protesters just because they express their own opinions on social media platforms, for this is a guaranteed right; authorities have also to stop violating people’s privacy by searching their own mobiles and social-media accounts, the report urged the Information Crime Office.

Euro-Med Monitor calls on the Lebanese authorities to have all security forces, who use excessive powers against unarmed protesters, held accountable, and to open prompt investigations into such violations.

Authorities have to introduce radical reforms in all sectors of the country, end encroachment onpublic resources and funds, and hold all perpetrators criminally accountable.

As electricity is considered a fundamental element in the economic, social, educational, and health aspects of the Lebanese life and abasic right every person has to enjoy, Lebanese authorities have to find a radical solution for the electricity crisis, because alternative solutions are too expensive for the Lebanese people.

Euro-Med Monitor calls on the United Nations (UN) to urgently intervene in the Lebanese crisis, especially after the Beirut explosion, and to immediately provide assistance tothe affected people.

The Lebanese authorities have to come up with a comprehensive implementable plan to end the ongoing crisis in the country. Such a plan encompasses the needed solutions for the economic crisis, most importantly, food and basic supplies, and prevent the growth of abject poverty rate in the country.

Euro-Med Monitor calls on the Parliament of Lebanon to terminate penalty clauses, related to praise and slander in the criminal law.

English report will be available soon.