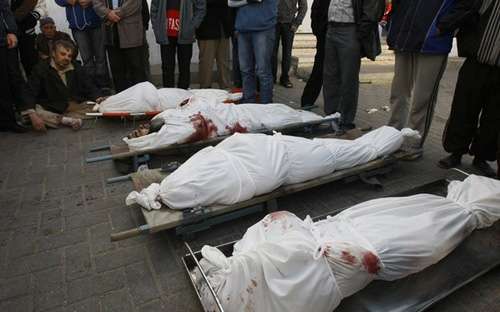 Euro-Med Monitor for Human Rights has warned of a new crime against Samouni family in Gaza. After killing 21 members of the family in Operation Cast Lead back in 2008, Israeli authorities continue to deny surviving members from their basic rights to treatment.

Euro-Med Monitor statement, issued Tuesday Jan. 15th, said the only child that survived the Samouni massacre is still undergoing aggravated symptoms due to her injury in the incident. Israeli authorities, however, continue to blackmail the family denying them travel for treatment.

Amal Samouni, 15-year child bearing witness of the Israeli military killing her father, brother and other family members, is today suffering from seven pieces of shrapnel left inside her head by Israeli missiles that targeted the family.

Medical reports confirm that she is suffering from chronic trance, heavy nose bleeding, and inability to keep balance. Such case requires a major surgery with special facilities that Palestinian hospitals are not equipped with, Euro-Med Monitor pointed out.

According to a testimony by Amal's mother to Euro-Med Monitor, the governmental hospital in Ramallah had issued urgent transfer of Amal to Israeli hospitals. Yet, Israeli authorities are preventing her from attending her patient daughter under the pretext of security.

Civil affairs officials have contacted the mother assuring her an Israeli permit has been given for Amal's travel for treatment, but Israeli authorities at the Eris crossing are not allowing her to accompany her daughter for alleged security reasons, she added.