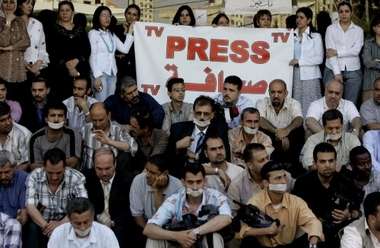 In a statement issued Saturday Feb. 9th, Euro-Med Monitor denounced the storming of journalist Muhammed Awad’s house by the PA’s Preventive Security in  the village of Badras in Ramallah on Thursday night Feb. 7th. The statement added that the security forces did not show any arrest or search warrants which makes such practice illegal.

Euro-Med Monitor personnel who happened to be at Muhammed Awad’s work compass during the raid quote him as saying that he was arrested three times last year by the PA’s intelligence unit without any warrant, and that they used to summon him weekly for inquiry. Muhammed added that he was last called for at the intelligence unit in Rammallah three days before his house was raid. He was threatened and blackmailed,then, to collaborate with the intelligence.

It is worth mentioning that the PA is suiting a number of activists and journalists over their political views. Among them is the youth activist Nezar Banat from Hebron who was accused of "running his mouth".  Columnist, Jihad Harb, is also facing the same charge after an article he published. Activist Safed Nezal, on top of that, was summoned three days ago for her participation in a peaceful protest.

A local court in Nablus  has issued a year-long sentence against activist Anas Awaad over "running his mouth against the elite" after a comment he posted on his Facebook page.Euro-Med Monitor has criticized such a sentence against Awaad as he did not commit any trespass that requires trial. The only crime he committed was that he expressed his opinions and thoughts freely as stipulated in the internal law and agreements, Euro-Med Monitor statement stressed.

The news of  presidential pardon was not followed by any legal measures to reverse his sentence and protect him from arrest so far. More importantly, the presidential pardon was conditioned until the appealing time against the sentence is over which reflects the exploitation and manipulation of judiciary, and the support coming from the top of the political pyramid for such practices, added Euro-Med Monitor statement.

Euro-Med Monitor has called upon the PA to allow public freedoms and end its arbitrary detention policy without issuing warrants, a policy that received much international criticism and condemnation.

Euro-Med Monitor for Human Rights, based in Geneva, has urged the EU and the donor countries to reconsider their unconditional support for the PA's security forces in light of its recurrent breaches against international law and human rights. Euro-Med Monitor thought such breaches could seriously embarrass the PA's donor countries and could hold them accountable before the public and law, especially in midst of foreign security and police missions supervising training and work inside the PA's security forces.