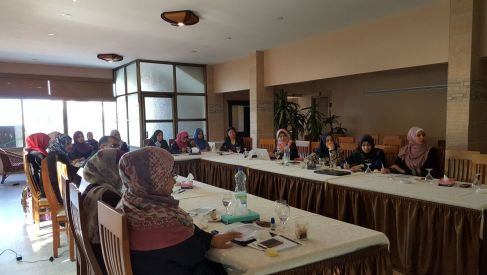 A training program on how to use crowdfunding platforms was launched by the Euro-Mediterranean Human Rights Monitor's regional office in the Palestinian territories. The program is a part of the organization's Women's Leadership Incubator project launched in early 2017, and is funded by the Swedish organization, Kvinna till Kvinna.

"The training has targeted the staff of the six local societies and Palestinian NGOs participating in the Women's Leadership Incubator project," said Abir Abu Shawish, WLI's project manager. "Not only did it aim at developing participants' crowdfunding skills, but also gave insight on how to secure funding and attract donations by individuals, institutions, and companies from all over the world," Abu Shawish added. With such training, participants can now kick off their own projects and initiatives. The trainees were 12 women nominated by the WLI's participating institutions.

The idea of the ​​training is a unique one, especially with the lack of funding sources, said Samah Safadi, one of the participants and the supervisor of the Family Development Association's Entrepreneurship and Employment for Graduate Students initiative. Civil society organizations and small enterprises can now benefit from such training by learning about easy and affordable ways to fund projects and initiatives without having to meet donors' interests," she added.

The training in this field is highly important, said Asma al-Qirnawi, a graduate from Business Information Systems. She added, I have come to know a number of crowdfunding websites and how they work, which further helps organizations develop their own work instead of relying on direct funding by donors.

Launched in early 2017, Women's Leadership Incubator - Gaza Strip 2017 project aims to promote gender equality, defend women’s rights in the Gaza Strip by training local and civil society staff and by encouraging them to integrate in society and take the lead so as to improve the living conditions of women in local institutions as well as the in the community.

WLI is one of Euro-Med's most powerful projects aimed at the amelioration of women's situation in the Palestinian territories.