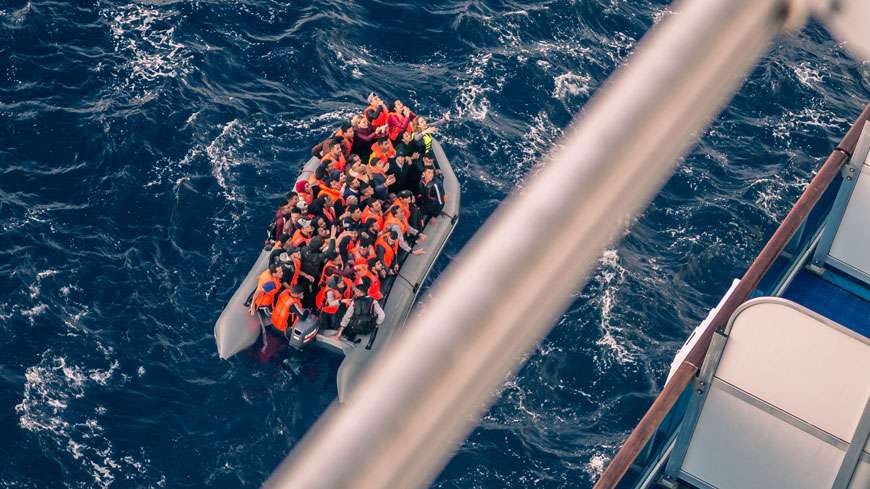 Geneva - The abandonment of nearly 400 migrants and asylum seekers in the Central Mediterranean on board of commercial and NGO boats that continue to fill the gap that Europe’s negligence has provoked and are often the only hope for people in danger at sea is deeply alarming, the Euro-Mediterranean Human Rights Monitor warned in a statement today. Italy and Malta should immediately allow the disembarkation of all the asylum-seekers on board of the Maersk Etienne tanker and the Sea-Watch 4 boat and provide them with the necessary legal and humanitarian assistance.

The German-flagged search and rescue boat Louise Michel, funded by British street artist Banksy, exceeded its safe carrying capacity after picking up 219 migrants off the Libyan coast since Thursday, and found itself stranded in the Central Mediterranean, unable to move. The crew of the small vessel issued a series of tweets calling for immediate assistance from the authorities of Italy, Malta and Germany, not only for its overcrowded deck but also for carrying the body of a migrant who had died earlier at sea.

After being ignored for two days, its appeals were finally met on Saturday by the Italian coastguard and the German-flagged charity vessel Sea-Watch 4. The Italian authorities picked up 49 particularly vulnerable migrants and took them to the island of Lampedusa while the remaining survivors were transferred to the Sea-Watch 4, which is now carrying on board 353 rescued people and is still waiting for a host port.

A third boat also finds itself helpless in the Mediterranean Sea. The Danish commercial tanker, Maersk Etienne, carrying a group of 27 migrants and refugees just escaped from Libya, has been searching a safe port for disembarkation since August 5.

“Once again Europe is showing to be an inaccessible fortress for the undesired” said Michela Pugliese, researcher at the Euro-Med Monitor, “Many among these 400 persons suffer of fuel burns, dehydration, hypothermia & traumatic injuries. Some have been at sea for weeks, others for almost a month. For the lack of an EU-led search and rescue capacity in the Mediterranean and a regional disembarkation mechanism, Europe is putting people already in danger even more at risk.”

Under international law, particularly according to the 1974 International Convention for the Safety of Life at Sea, the 1979 International Convention on Maritime Search and Rescue and the 1982 UN Convention on the Law of the Sea, people in distress at sea must be rescued “with all possible speed” and taken to a place of safety, where their life is no longer threatened, their basic human needs are met and a genuine opportunity to seek asylum is offered, regardless of their nationality or status or the circumstances in which they are found.

Euro-Med calls on Malta and Italy to allow the safe disembarkation of the 27 migrants on the Maersk Etienne tanker and the 353 people on board of the Sea-Watch 4, to recognize their right to seek asylum, in accordance with Article 14 of the Universal Declaration of Human Rights, and to provide for their medical, protection and other basic needs.

Euro-Med Monitor calls on EU member states to immediately provide concrete support to Southern European countries like Italy and Malta, in accordance with the 1951 Refugee Convention that acknowledges that “the grant of asylum may place unduly heavy burdens on certain countries, and […] cannot therefore be achieved without international co-operation”. For this to happen, EU countries must realize the need to jointly address the migration flows in the Mediterranean Sea, also in cooperation with search and rescue NGO boats and other relevant organizations and agencies, in order to find long-lasting solutions in respect of international law and migrants’ human rights.