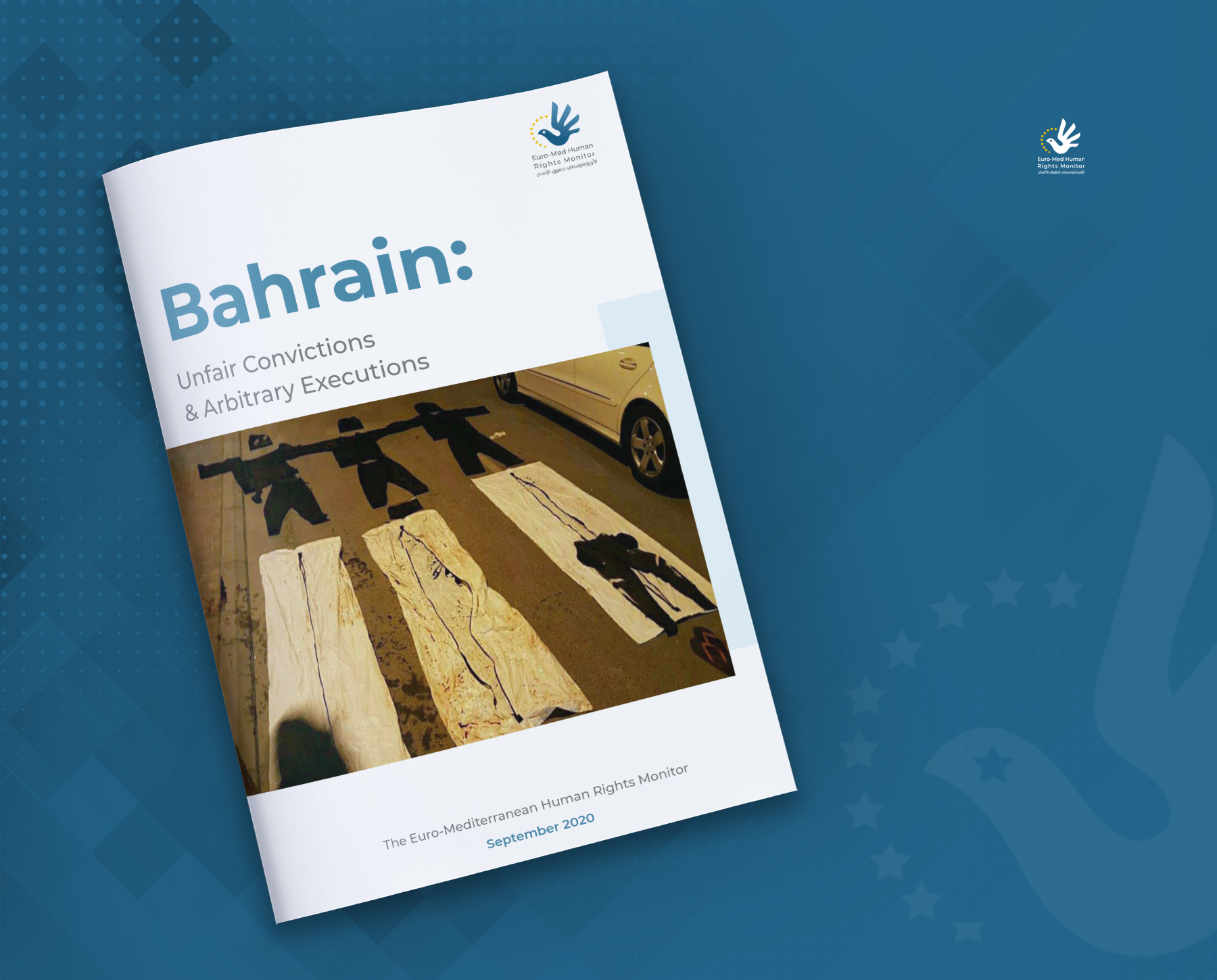 Geneva-based Euro-Mediterranean Human Rights Monitor called on the king of Bahrain, Hamad bin Isa Al Khalifa, not to ratify the death sentences issued against prisoners of conscience, urging him to stop the detention or torture of opponents and restricting their freedom.

“I was sentenced to death on charges of joining terrorist groups, killing security forces members, and making explosives, where I signed a forced confession under torture after 13 days of detention, torture, and inhumane treatment."

Zuhair Ibrahim Jassim Abdullah, one of the sentenced-to-death detainees in Bahraini prisons

“After the crackdown on public protests, calling for radical changes in the political system in the Kingdom in 2011, Bahraini authorities grossly used the judiciary to purge activists and political opponents through issuing dozens of death sentences against them,” said Euro-Med Monitor in a brief report on Wednesday entitled “Bahrain: Unfair Convictions and Arbitrary Executions.”

The report included statements by sentenced-to-death detainees, indicating that prisons lack the minimum standards of health care and living conditions.

In one of the statements, 40-year-old detainee Zuhair Ibrahim Jassim Abdullah, a father of five children, said, “On November 2nd, 2017, I was arrested on charges of killing security forces members, and I was detained for 55 days in solitary confinement. During my detention, I was subjected to various forms of torture and ill-treatment, including electric shocks, sexual harassment, stripping, and severe beating. A group of officers attacked my wife, beat her while she was home, and threatened her of rape. By doing so, they wanted to put much pressure on me to sign confessions pre-prepared by the security authorities.”

He added, “after 13 days of detention, torture and inhumane treatment, I signed a forced confession, including a number of charges assumed to be committed from 2012 to 2017. These confessions include joining terrorist groups, killing security forces members, and making explosives. Based on these confessions, which they extracted from me under torture, I was sentenced to death.”

In the report, Euro-Med Monitor stated that Bahraini courts had issued more than 1,100 judicial and political decisions, 30 of which were death sentences, 130 life sentences, and more than 300 denaturalization decisions since the beginning of the public protests.

The report highlights that the Bahraini judiciary, including National Security Courts, military judiciary, and the civil courts, issued death sentences against political opponents and civil society activists, increasing on yearly basis, and eventually putting burden on the kingdom judiciary records.

“The legal system in Bahrain forces the juridical authority to submit for the King's authority, challenging the independence of the judiciary, which is the most important aspect of the system, in addition to harming international principles and standards regarding independence and integrity. This explains the unfair executions against activists without ggiving them the guarantees for a fair trial adopted by local and international laws,” said Euro-Med Monitor legal advisor Tariq Al-Liwa.

According to legal reports, 74 Bahraini political detainees have died inside prisons, while 52 detainees suffer from different diseases, 13 of whom suffer from incurable diseases such as cancer, and 17 others suffer from chronic diseases such as diabetes. The reason behind this is the intentional ill-treatment against them, aiming at extracting confessions from them.

“The legal system in Bahrain forces the juridical authority to submit for the King's authority, challenging the independence of the judiciary, which is the most important aspect of the system, in addition to harming international principles and standards regarding independence and integrity.

Since 2017, Bahrain executed seven civilians after being accused of carrying out operations against the security forces. On the other hand, victims provided horrific statements prior to their execution, including how they were tortured, stripped, severely beaten, and electrocuted to extract confessions, incriminating them on charges and giving them death sentences.

Euro-Mediterranean Human Rights Monitor expresses its fear for the lives of 12 other detainees who were sentenced to death that they will meet the same fate of those who were executed if the king of Bahrain ratifies these decisions, especially after they stated that they were subjected to various forms of torture—just like those who were executed—.Similarly, Euro-Med Monitor expresses its complete rejection of the death sentence, calling on the Bahraini authorities to have such a penalty outlawed as it takes people’s lives, which is a fundamental right guaranteed by local and international laws.

Euro-Med Monitor calls on the Bahraini authorities to reconsider the unfair convictions against detainees, to stop the torture policy to extract confessions, and to hold officials accountable for violating the detainees' rights, including depriving them of a fair trial and to stop all forms of torture.

Euro-Med Monitor urgently calls on the UN Special Rapporteur on Torture to pay a quick visit to Bahrain, to learn first-hand about detainees and the conditions of the prisons they are held inside.

On November 23, 2011, the Bahrain Independent Commission of Inquiry (BICI) delivered a report showcasing that the Bahraini security forces used excessive force to crack down on public protests that sparked out in February 2011, where they killed 46 protesters and detained thousands, 560 of whom were subjected to torture during detention. Since 2014, the state tightened its grip on public protests, where crackdown campaigns were intensified. The authorities disbanded the opposition parties and independent media outlets. They chased and arrested opponents, journalists, human rights defenders, activists, and whoever criticized the domestic and foreign policy of the Bahraini government on social media. Since then, the Bahraini judiciary unlawfully issued 30 death sentences, 130 life sentences, and more than 300 denaturalization decisions. Authorities use various forms of torture, forcing the detainees to confess wrongdoings they have never committed. In addition, the detainees are held in detention centers lacking the minimum standards of humanity.