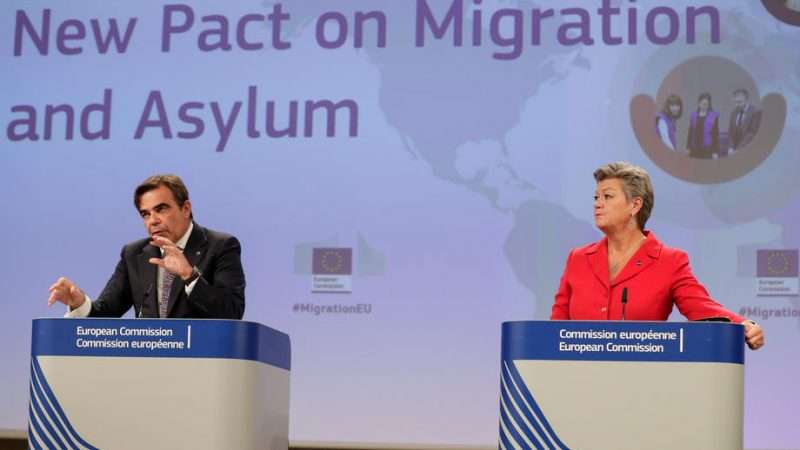 Geneva - The new Pact on Migration and Asylum proposed by the European Commission shows once again that the European approach for facing migration is broken, Euro-Mediterranean Human Rights Monitor said in a statement today. Member State’s responsibility to take in asylum seekers would be traded for money, frontline states would be still largely abandoned and anti-immigration governments would be given more power to reject and abuse migrants.

With the new Pact on Migration and Asylum, each Member State can refuse to host asylum seekers and decide instead to support the states under pressure in other ways. For instance, by controversially financing the repatriations of rejected asylum seekers to their country of origin under the so-called “return sponsorship”.

The new Pact fails to provide any concrete support for frontline states, since the European commission does not impose sanctions on states who refuse to take in asylum seekers. It abandons the idea of mandatory refugee quotas and leaves intact the controversial principle of the Dublin Regulation on the first country of entry. On the contrary, countries like Italy and Greece will have to conduct faster procedures, carrying out health and security screenings within five days to establish who has the right to seek asylum and who should be repatriated, which risks producing high rates of inaccurate and arbitrary decisions.

The proposal of subjecting migrants to a preliminary assessment to exclude those who allegedly have no basis for an asylum claim does not take in consideration that a person not eligible for the refugee status may still be qualified for other forms of protection on humanitarian grounds, for instance the subsidiary protection enshrined in Article 2 of Council Directive 2011/95/EU of the European Parliament and of the Council. This matter is too complex and delicate to be assessed in a border procedure after a maximum of 5 days from a life-threatening journey.

The European Commission wants to introduce a monitoring mechanism to investigate the illegal pushbacks of asylum seekers at European borders. However, it relies on the same governments accused of perpetrating violent abuses on migrants. The new Pact has a persistent and clear focus on stronger border checks and new rules on deportation, rather than harmonising the European migration system, making migration procedures more efficient or upholding the rights of people on the move.

“The new Pact on Migration and Asylum echoes the anti-immigration policies and practices which have multiplied in Europe since the refugee crisis of 2015, even if the number of irregular arrivals by then has dropped by 92% according to Frontex” said Michela Pugliese, researcher at Euro-Med Monitor, “A common European migration system is needed but not one that trades due responsibility for money.”

Each Member State who take in migrants would receive €10,000 from the EU budget for each adult, but no country would be obliged to offer shelter to anyone. Allowing migrants in to ask for asylum should not be an option: it is an obligation under international law, particularly reflected in Art. 14 of the Universal Declaration of Human Rights, in Articles 18 and 19 of the EU Charter and in the 1951 Refugee Convention.

Euro-Med Monitor calls on each European Member State to urgently find a common, harmonised and sustainable framework for asylum and migration management in accordance with the 1951 Refugee Convention, as enshrined in Art. 78 of the Treaty on the Functioning of the European Union, and in respect of the fundamental right of migrants to seek protection.