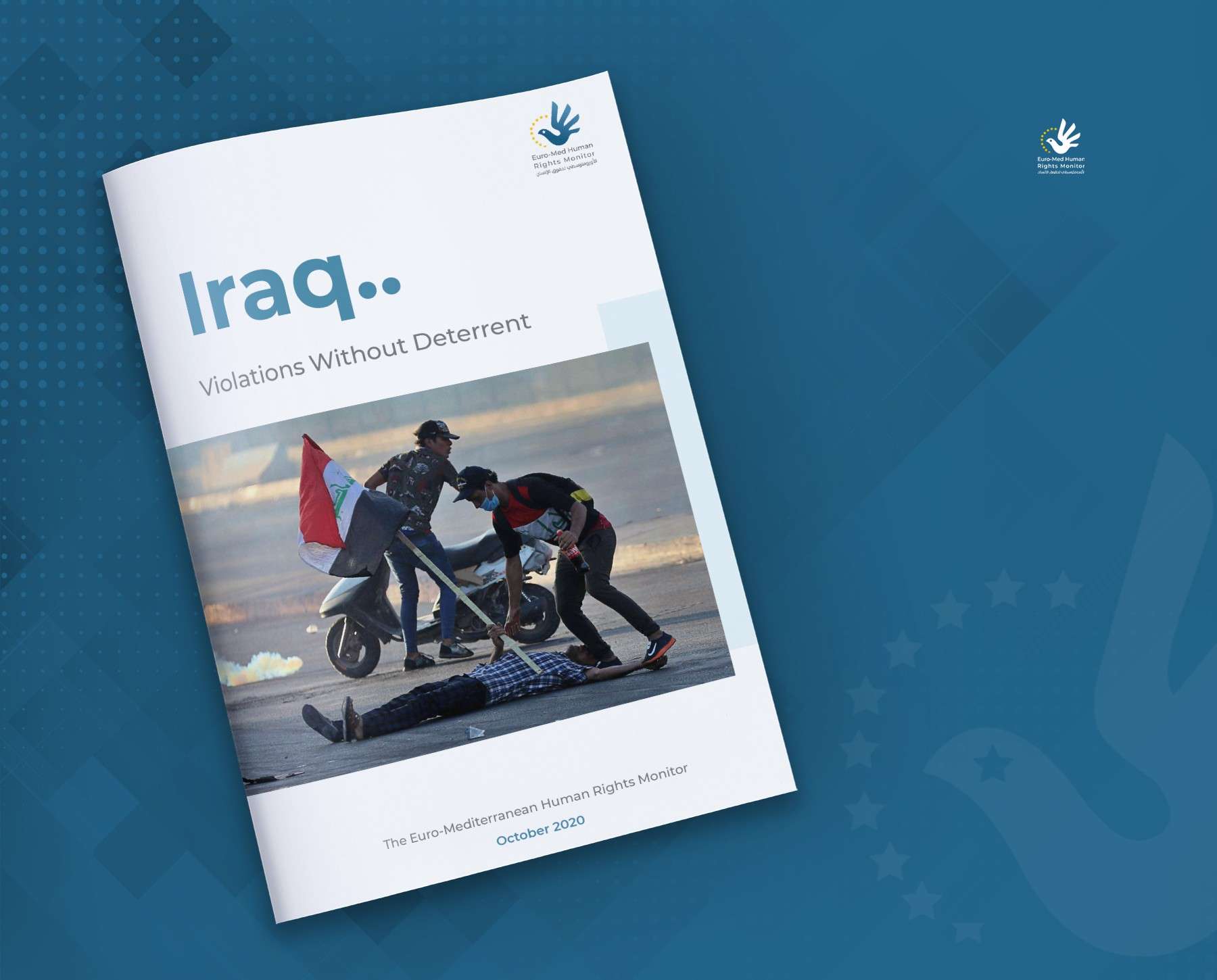 Geneva - The Euro-Mediterranean Human Rights Monitor revealed in a detailed report published on October 1, 2020, the first anniversary of the outbreak of popular protests in Iraq, terrifying testimonies of protesters who were victims of the Iraqi security and armed militias’ violations. The Euro-Med expressed its deep concern over the atmosphere of fear and targeting that dominates the political and press scenes in the country.

The 45-page report detailed the reasons behind the outbreak of popular protests in various Iraqi provinces, the violent security response to protests, and the losses of lives. The report documented the methods and forms of violations practiced by the security forces and armed militias against opponents, political activists, and journalists and provided a legal framework for these practices.

The report entitled “Iraq: Violations Without Deterrent” stated that for years, Iraq has been suffering from tragic human rights violations and tough economic conditions, which prompted thousands of Iraqis to take to the streets at the beginning of October 2019, to protest against the crises the country is witnessing such as rising prices, unemployment, poverty, poor basic services such as the lack of clean water and electricity, the rampant corruption in state institutions, escalation of violations against civilians, including arrests, kidnappings and enforced disappearances, and mounting restrictions on the freedom of opinion and expression.

The report indicated that the security forces and armed partisan militias rushed to confront the protestors with excessive violence, including killings, arrests, torture, and enforced disappearances, leaving more than 730 of them dead and about 25,000 wounded in various Iraqi provinces. The Euro-Med report pointed out that the most serious forms of repression that activists were subjected to were organized assassinations, which claimed the lives of about 70, as the competent authorities did not make enough efforts to uncover the perpetrators and stop these crimes.

The report highlighted the restrictions the authorities impose against freedom of opinion and expression under the pretext of enforcing law and maintaining public order. The security forces arrested many activists and bloggers who posted on social media, under the pretext that they threaten social peace, spread hatred, and ignite discord.

As for arrests, disappearances, and torture, the report noted that the security forces and armed militias arrested thousands of demonstrators, and forcibly disappeared 75 others, of whom 22 were released, while the other 53 remain missing, and their fate is still unknown.

Euro-Med Monitor’s field research team in Iraq obtained several testimonies from protesters who were subjected to torture and ill-treatment during the arrests. It appears that the aim of torture was to extract confessions, force the victims to sign papers admitting committing violations or force them to sing papers without knowing their content to punish them.

Victims reported that torture took many forms such as electric shocks, strangling, slapping, hanging by suspending them from the limbs, beatings, in addition to verbal abuse and threatening.

Hussein Ali Khalaf, 20, who was formerly kidnapped from Wasit Governorate in southern Iraq said: “On March 6, 2020, while I was on my way to the demonstrations, vehicles with masked men inside intercepted me. Six of them got out and started beating me. They blindfolded me and took me to an unknown place. I was held there for about 12 hours, during which, I was blindfolded and handcuffed. I was severely beaten all over my body. I was kicked repeatedly and continuously in sensitive areas of my body and insulted with the worst words. They shaved my head in a humiliating way and threatened me with death if I continue to participate in the demonstrations. At the end of that day, I was put in a car with a group of people, who threw me on the side of the road and fled. As soon as I removed the blindfold from my eyes, they were already gone, and I could not recognize them”.

The report documented systematic attacks on journalists and media platforms that participate in covering the protests. Since the beginning of the popular protests, more than 414 cases of violations against journalists and the press have been recorded. The most serious of which was physical liquidation, as 28 journalists lost their lives in assassinations carried out by unknown gunmen. Other forms of violations targetedt journalists such as physical assaults, intimidation, arbitrary detention, forcing journalists to delete some photographs or written materials online, in addition to detaining a large number of them for interviewing protesters.

“Iraqi local and international laws prohibit all violations committed by the Iraqi government forces and armed militias, whether those related to extrajudicial killings, restrictions on freedom of opinion and expression or enforced disappearance and torture,” said Tariq Al-Lewa, Euro-Med Monitor’s legal advisor.

“There is a lack of an effective accountability system in Iraq, as assassinations, kidnappings, and other violations constantly happen without conducting serious investigations to reveal the perpetrators, hold them accountable, and ensure that they do not go unpunished,” he added.

The report said that the Iraqi government should take further measures to locate the abducted demonstrators, work to set them free, and respect the basic rights as Iraqi citizens, which are guaranteed in both national and international laws such as the rights to life, liberty and personal security, freedom of opinion and expression, peaceful assembly, and other fundamental rights that must not be violated.

The report urged the Iraqi authorities to review and amend national laws in line with International Humanitarian Law with regard to the use of force and dealing with protesters, and to allow protesters to exercise their rights, most importantly the right to freedom of opinion and expression. The report called on the authorities to restore security and public order, within the limits of law, by dismantling armed militias that operate outside the framework of law, and to end the state of chaos that threatens all freedoms in the country.