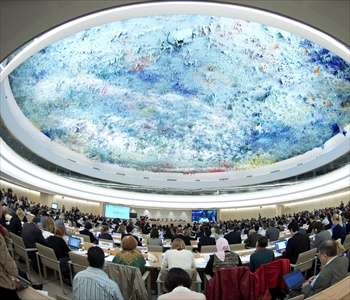 UN Radio, (Geneva) - The United Nations High Commissioner for Human Rights says that serious violations of international law continue to be committed on a widespread scale in the occupied Palestinian territory. Navi Pillay also says that she's 'deeply concerned' about the situation of thousands of Palestinians detained and imprisoned by Israel.

These are some of the findings of Ms Pillay's fifth periodic report on the human rights situation in the occupied Palestinian territory, which she presented to the Human Rights Council in Geneva. The report says that violence by Israeli settlers against Palestinians continues with impunity and that Israel should protect Palestinians and their property from attacks. The report covers the period from mid November 2011 to the end of November 2012, during which time 169 Palestinians were injured by settlers. Ms Pillay says violence by security forces is another area that needs to be urgently addressed.

"Excessive use of force by Israeli security forces operating in the West Bank remains a priority concern. Seven Palestinians died and over 3000 were injured during the reporting period. Four of these deaths occurred during demonstrations."

The report also highlights Israel's policies and practices on the detention of Palestinian children. Earlier this month UNICEF said that children are often subjected to ill-treatment, during arrest, transfer and interrogation by Israeli authorities. Navi Pillay has called on the Israeli Government to be mindful of its obligations under the Convention on the Rights of the Child and other international rulings.