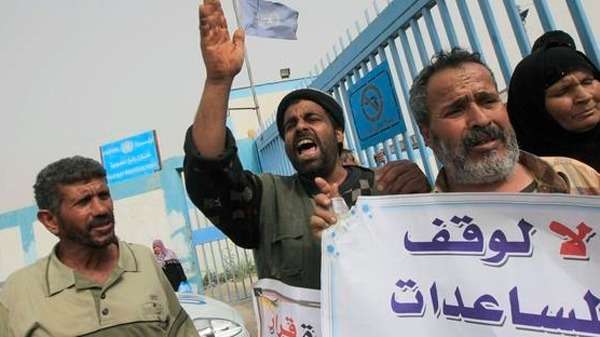 Euro-Med Monitor for Human Rights condemned United Nations’ Work and Relief Agency “UNRWA” closure of relief and aid centers in the Gaza Strip, following demonstrators broke into its headquarters in Gaza city last Thursday while protesting the recent reduction in the Agency’s services to Palestinian refugees.

In a statement issued Saturday (April 6th 2013),Euro-Med Monitor, the Geneva-based human rights organization, considered that it is unjust to threat to cut off aid distribution to eligible and needy refugees in Gaza in response to demonstrations. The organization added that the closure of the Gaza twelve aid centers will directly affect about 25.000 refugees who receive aid daily.

The Observer said that “UNRWA is required to carry out its responsibility, and exert greater efforts with the international community and donor countries in order to maintain the levels of its humanitarian aids which are provided to more than 800.000 Palestinian refugees, about two thirds of the population of Gaza”.

It pointed out that Gaza refugees who live in very difficult living conditions, have adjusted their lives depending on the size and the timing of the aid reception. Such urgency and priority require UNRWA to reconsider its spending cuts for this program and turn that reduction to other programs that are less important to avoid affecting its most significant service.

On April 1st, UNRWA has frozen its financial assistance for 21.000 families in the Gaza Strip, which affected about 100.000 refugees and replaced it with a three- month job creation program which will benefit about 10.000 families only. This led tens of Palestinian refugees to protest in front of its HQ in Gaza, which ended with storming the main entrance last Thursday, demanding UNRWA to repeal its reduction decision.

In the same time, the Euro-Med Monitor called on the authorities in Gaza to provide the needed protection to UNRWA staff and workers, and ensure the peaceful nature of the protest movement.

Also, the organization urged the UN relief agency to reopen its offices across the Gaza Strip, and not to resort to such collective punishment procedures that touch the lives of large number of population who depend on UNRWA for providing their life basic needs, according to law and agency’s commitments and mandate.