Moria 2.0: migrants who escaped fire now live in another hell 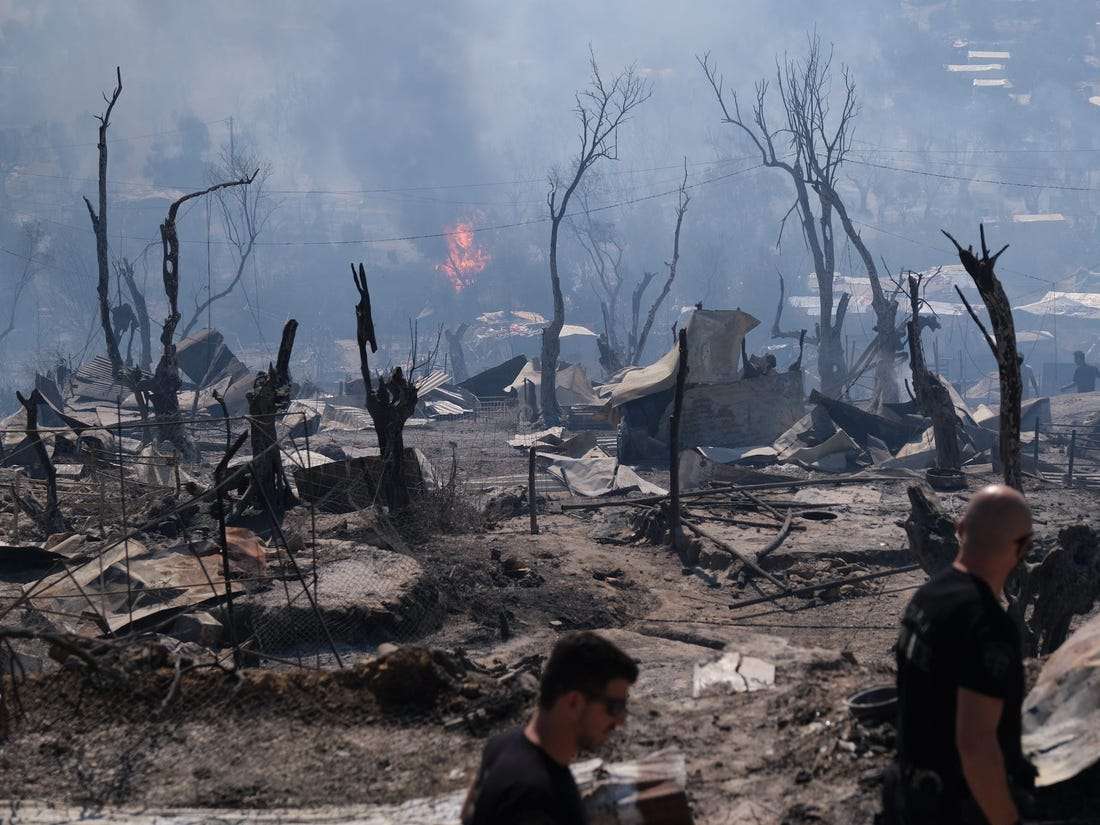 Winter is approaching, with strong winds and pouring rain. Imagine living in a flimsy tent prone to flooding; sleeping on the ground on top of plastic sheets; or having to wash your clothes and body in the sea because there is not enough running water. These are the living conditions of 7,800 refugees and asylum-seekers currently confined to the brand-new site of Kara Tepe, created after fires destroyed the infamous Moria camp. In other words, Kara Tepe is already replicating Moria’s inhuman conditions only with a slight change of name.

Its residents call it “Moria 2.0”, but many consider it even worse. According to the latest “Lesbos Bulletin,” published jointly by the Greek Council for Refugees and Oxfam, the first rainfall of October was sufficient to flood more than 80 tents and several parts of the new camp. Food –which is provided once or twice each day – is insufficient and of poor quality, so much so that in the first days, different women and children fainted from hunger. As stated by Refugee Support Aegean, many tents have no beds and the migrants, including elderly ones, are forced to sleep on the uneven ground on plastic sheets.

Hygiene conditions are critical as well, which is even worst considering the global pandemic and the impossibility to practice social distancing. The lack of running water leads many residents to wash in the sea, with the risk of drowning, particularly for children, and of being infected by contamination from wastewater from the camp, as there is no drainage and sewage system. “My mother tries not to eat a lot of food because she doesn’t want to go to the toilet,” says a girl living in the camp, explaining that some people prefer to walk to a nearby town to use toilets in cafes not to use camp toilets. For the scarcity of toilets and showers and the insufficient lighting in the new site, women and girls face an increased risk of sexual and gender-based violence. “Many of the women are forced to go to the sea during the night to have a bath, as during the day there are many men around and they want to avoid indiscreet gazes”, explains a young woman from Afghanistan.

The dire conditions of the camp heavily impact the mental health of the residents determinately. A young resident of Moria 2.0 recounts: “The day is a never-ending wait: waiting for permission to go out, waiting outside the supermarket, waiting to get an interview for the asylum. People freak out.” Even if migrants are allowed to leave the camp between 8am–8pm every day, apart from Sunday, they have little access to medical, psychosocial and legal support. Tents designed for one family are shared by several, and single men sleep in bunk beds in tents hosting 200 people. This poses great concerns regarding their dignity, mental health and physical wellbeing, especially during the Coronavirus pandemic. The situation is even worse for children and young people, as a growing number among them are taking antidepressants and have trouble sleeping. According to Greg Kavarnos, psychologist with MSF, children in the camp are increasingly feeling a sense of resignation. Seeing their parents trapped, unable to make decisions and take action, they become hopeless. “We came here to feel like humans, not to be treated worse and worse every day. There are two types of war: one with guns, like in Syria, where you are waiting for a bomb at any moment. And the other is here, a psychological war” says a Syrian mother.

The “psychological war” is intensified by the fact that the new camp was built on a former military shooting range, used by Greek soldiers for firing practice and training. Even if the site was swept for unexploded landmines and grenades, camp residents have still found bullets and used ammunition scattered around. Toxicology experts have warned these objects could still pose a serious health risk due to invisible residue.

Despite the Greek government insistence on this camp being temporary, “Moria 2.0” and its harsh realities are likely to stay and to be the only prospect for migrants on Lesbos. Indeed, the Greek Minister for Immigration and Asylum, Notis Mitarakis, announced the closure by the end of the year of the two other camps on the island, Pikpa and Kara Tepe. Both are considered best-practice examples for providing a safe space for fewer and particularly vulnerable migrants, including unaccompanied minors, people with serious medical conditions and disabilities, victims of torture and LGBTI people. In particular, the small and self-organized camp of Pikpa, run together by volunteers, refugees and residents and based on the principles of solidarity, equality and human connection, proves that Europe does not need to violate migrants’ freedoms to protect the rights of the host society.

Even if its closure is now postponed, the future of the Pikpa camp is still uncertain. Meanwhile, the future of the European Union seems clear, as it focuses more and more on containment of migrants, irrespective of their human security. “Moria 2.0” represents another missed opportunity by the EU to prove respect for migrants’ rights and by EU Member States to share responsibility and find long-term sustainable solutions for asylum seekers and refugees. Instead of investing money to adjust another inhumane, alienating and possibly toxic Moria camp, Greece, the EU and its partners should support, protect and replicate realities like Pikpa and Kara Tepe, that remind everyone how an open society should be and how it should act.