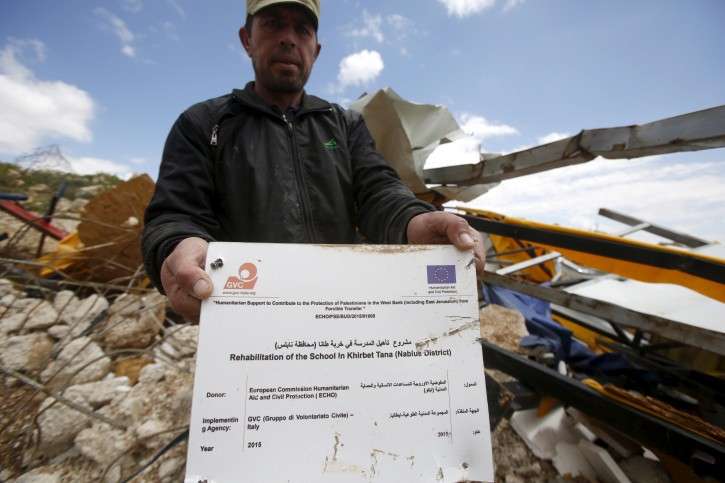 Geneva - We warmly commend the EU’s call on Israel to halt its demolitions of Palestinian structures in the occupied territories – including of EU-funded structures – as the rate of such demolitions has alarmingly been hitting a record high this year, the Euro-Mediterranean Human Rights Monitor said in a statement today. What’s needed from the EU next is to take concrete action and exert adequate pressure on Israel to stop such grave violations.

Earlier today, the spokesperson of the European External Action Service issued a statement that denounces Israel’s demolition of more than 70 Palestinian structures in Khirbet Hamsa al-Foqa, in the northern Jordan Valley. The statement warned that there are currently 52 Palestinian schools under threat of demolition and called for “the protection of children, including ensuring their right to education in a safe and secure school environment.” The EU reiterated that in light of the humanitarian impact of the current coronavirus pandemic, Israel should halt those demolitions.

“The EU’s statement is a positive acknowledgement of the seriousness and severity of the growing demolitions of Palestinian structures amid the Coronavirus pandemic,” said Ramy Abdu, Euro-Med Monitor Chairman, “what’s needed now is translating this strong position into meaningful policies and actions that put an end to Israel’s unconstrained violations of international law.”

For the last two months, Euro-Med Monitor’s team has been intensively campaigning for a strong EU position on the escalated and accelerated Israeli demolitions of Palestinian structures in Area C and the West Bank, including structures funded by the EU and its member states.

In October, Euro-Med Monitor delivered a policy memo directly to several EU lawmakers that detailed the significance of Israel’s assault on Palestinian presence in Area C and East Jerusalem. The memo noted that despite the coronavirus pandemic and the accompanying economic crisis, Israel has been significantly stepping up its demolitions of Palestinian structures, including EU-funded projects, where the period from March to August 2020 saw the highest average destruction rate in four years. “Israel doesn’t only seek to undermine and disincentivize EU-funded structures, it aims to eliminate them altogether,” the memo emphasized.

Disputing Israel’s pretext for demolishing Palestinian structures as “lacking permit,” Euro-Med Monitor detailed its documentation of how Israel does not permit construction and development for Palestinians in Area C, not even a linking up to the water and electricity grids. “Israel has deliberately made such permits nearly impossible for Palestinians or internationals to obtain, with only as few as 2.3% of applications for building permits in Area C approved by Israeli authorities between 2009 and 2012.” The Memo further noted that Euro-Med Monitor’s team has documented some instances in which Israel demolished and confiscated EU funded power grids and equipment that were installed in coordination with Israel’s civil administration in the first place.

Euro-Med Monitor recommended in its policy memo that the EU should articulate a clear and consistent position on demolitions and destruction of EU-funded projects; demand compensation from Israel for EU-funded projects that get destroyed; and continue to invest in Palestinian development, but substantively penalize the Israeli government when European-funded projects are targeted.

“We are glad to see the EU taking such a clear position against those demolitions, however, only concrete actions rather than rhetorical denunciations can bring those violations to an end,” Abdu concluded, “As Israel’s largest trading partner, the EU is both morally responsible and politically capable of putting an end to the Israeli assault on Palestinian rights.”