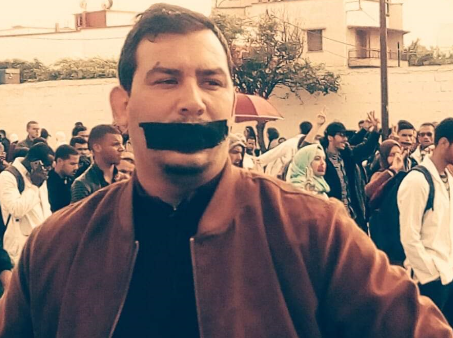 Geneva - Following the arrest of Moroccan human rights activist Yassin Bensalah, over a Facebook post, the Euro-Mediterranean Human Rights Monitor expressed its deep concern over the escalating practices that would threaten human rights gains in the country.

In a press release on Thursday, Euro-Med Monitor stated that on Monday, November 9, at 5 p.m. the judicial police arrested Bensalah in the city of El Kelaa des Sraghna. The head of the judicial police issued a complaint to the Crown Prosecutor at the Court of First Instance, demanding the arrest of Bensalah after he wrote a Facebook post criticizing the security performance, drug hotbeds and rampant security presence and chaos.

Prior to his arrest on the same day, Bensalah received a call from judicial police officers, asking him to attend to the security department in des Sraghna for investigation over his Facebook post. After that, he was informed that he would be arrested.

After his arrest, Bensalah was taken for a court hearing. Based on the charges related to his criticism and 'insult' of the security situation and public officials, the judge ruled to transfer him to the El Kelaa des Sraghna prison, which is under heavy security protection, to be tired next Tuesday.

Euro-Med Monitor obtained documents issued by the Crown's Deputy Prosecutor, Abd al-Karim Sharbati, on Tuesday, November 10. According to Articles 263 and 265 of the Moroccan Penal Code, the Prosecutor ordered the referral of Bensalah to a court hearing on charges of insulting "an organized body" and "public officials because of the performance of their duties."

This is not the first time Bensalah has been tried. One of the private clinics sued him due to a Facebook post revealing the suicide of a patient, who threw himself from one of the upper floors of the clinic in the city El Kelaa des Sraghna. In the post, Bensalah demanded to hold the officials in the Ministry of Health and workers in the clinic accountable and to open an immediate investigation into the incident.

Last Monday, several activists organized a sit-in in front of the National Security headquarters in the city of El Kelaa des Sraghna, calling for releasing Bensalah. This is as part of an initiative organized with the Central Office of Human Rights.

In an interview with Euro-Med Monitor, Rashid Efs, a close friend of Bensalah, stated that "Bensalah is still imprisoned, and his family and I contact him over the phone as we are not allowed to visit him because of COVID-19 precautionary measures."

He added, "The Moroccan judiciary deprived Bensalah off his right to a fair trial and to assign a lawyer. They did not care for his health and psychological well-being. He was deprived of the right to temporary release as his wife was in the last stages of pregnancy and gave birth two days after his arrest."

In another interview, Adel Techito, the head of the Moroccan League for the Defence of Human Rights, stated that "Regarding the Moroccan Penal Code, Bensalah case cannot be dealt with this way as his case is about publishing and blogging. Article 74 in the Press and Publication Code stipulates that blogging on social media should never call for arrest."

The arrest of Bensalah violates relevant local and international laws. Article 25 of the Moroccan Constitution stipulates that "The freedoms of thought, opinion and expression under all their forms are guaranteed. The freedoms of creation, of publication and presentation in literary and artistic matters and of scientific and technical research are guaranteed."

International laws and charters have also guaranteed freedom of opinion and expression. Article 19 of the International Covenant on Civil and Political Rights, which Morocco ratified in 1979, stipulates that "1. Everyone shall have the right to hold opinions without interference. 2. Everyone shall have the right to freedom of expression; this right shall include freedom to seek, receive and impart information and ideas of all kinds, regardless of frontiers, either orally, in writing or print, in the form of art, or through any other media of his choice."

Euro-Med Monitor called on the Moroccan authorities to release Bensalah and drop all charges against him as they are related to a publishing case, where depriving someone the freedom is prohibited. Also, it called on the authorities to respect its obligations regarding the realization of freedom of expression and to put an end to human rights violations that undermine the guaranteed inherent rights at the domestic and international levels.

Euro-Med Monitor urged the Moroccan authorities to abide by the 2018 Marrakesh Declaration, which was adopted by all national human rights organizations around the world. This Declaration calls for expanding the civil space, strengthening human rights defenders and their freedoms, and protecting them from arrest, abuse and prosecution.