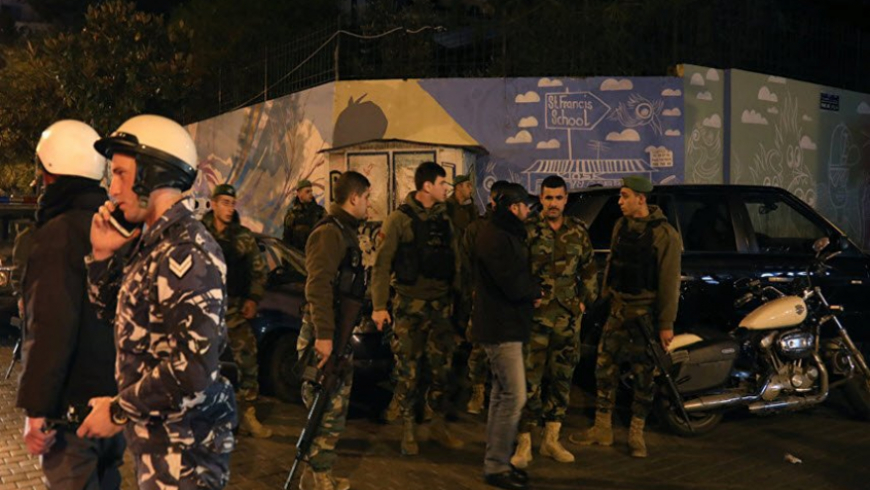 Geneva – The Euro-Mediterranean Human Rights Monitor condemned in a press release on Monday the attacks against a large number of Syrian refugees in northern Lebanon, after a Syrian refugee killed a Lebanese young man.

Lebanese man Joseph Touq was killed during a quarrel between him and (M.H), a 27-year-old Syrian refugee, where the latter shot Touq several times, killing him immediately. After the news of the murder spread, the refugee turned himself in to the Internal Security Forces.

A protest took place in Bsharri where young men from the town attacked a number of Syrian refugees and burned down some of their houses. As a result, the refugees escaped the place, heading towards the city of Tripoli, to spend the night in the parks and roads.

In an interview with Euro-Med Monitor, Hussein Raja, one of the Syrian refugees in Bsharri, said: “on the day of the accident, while I was sitting at home, some of the people in Bsharri attempted to storm my house but they could not. One of us secured a car to get out of town towards Tripoli. When we arrived at the UNHCR, they did nothing ti help us until some organizations came and offered us housing.”

He added, “I will not go back to Bsharri as danger still exists. Now, I am looking for a house and a job in Tripoli, and I will get back to Bsharri to get the rest of our stuff. The number of families that escaped the city reached about 200.”Euro-Med Monitor stressed that the crime was an individual criminal offence that requires accountability and justice for the victim’s family. However, it is unacceptable that an individual crime is used to collectively punish all Syrian refugees.In another interview, Kafa Al-Faraj, one of the Syrian refugees in the town, said: “on the day of the crime, while I was home, I heard cracking and beating sounds near the house as some attempted to storm the house but they could not. As my husband went out to tell them that he had nothing to do with the killer, they beat him along with another Syrian youth. Then, our Lebanese neighbor intervened and prevented them from beating him. The next day, my husband's employer came and drove us to Tripoli. Some of the families that left Basharri went to Al-Qubbah, and some others went to Tripoli. However, many of them were subjected to beating.”

She added, while walking by AlHanan Hospital in Tripoli, I saw a significant number of Syrian refugees who were beaten. In fact, I will not go back to Bsharri and will not take my personal stuff as I am afraid to be attacked and my stuff to be destroyed.”

Lebanon hosts about one and a half million Syrian refugees. Only 950,000 of them are registered with the High Commissioner for Refugees, and only about 2,500 refugees have voluntarily returned to their country. Since their arrival in Lebanon, the Lebanese government has not made serious efforts to address their problems, which has made them vulnerable to many violations.

In another interview with Waddah Ghajar, a Syrian refugee residing in Bsharri, he said: “after the accident, at 6 pm, my sponsor called me and informed me that the killer was a Syrian refugee. He asked me to stay home. I thought about leaving but back then, there were no buses to Tripoli. At eight pm, some people attacked Syrians' homes, destroying furniture and items, and burning motorcycles. It was the most difficult hours, especially when some young men attacked my house and hit me on the back with sticks – at the time I was suffering pain in the back – which almost made me fall down. My sponsor came and helped me out and my family and secured a safe passaging for us".

"We took refuge in the town of Kafr Aqa, where we stayed overnight and went to Tripoli. We are now displaced from one house to another," he added. "We are unable to return to Bsharri because we are very afraid. Now I am looking for work and a home in Tripoli".

Activist Muhammad Dabab, a young Syrian living in Tripoli and one of those who provided assistance to Syrian refugees fleeing the town of Basharri, told Euro-Med Monitor: “I provided assistance to refugees from the moment they arrived in Tripoli, where I was able to secure accommodation for some of them and coordinate with associations to help them out. I closely watched the conditions of the refugees. They were living in a great shock because of what happened to them, in addition to the UNHCR indifference and the lack of any assistance to them. Those who fled were of all age groups: young people, children, and elders, all of them left their homes under very difficult conditions without taking their belongings, medicines, baby milk or diapers. Some of the well-to-do and religious men helped them secure their accommodation and some of the basic needs they needed".

He added, “currently, these people are staying in temporary homes, and they protest every morning in front of the UNHCR [headquarters], wait for aid and then return home at night. The situation in Basharri is still very difficult. Even for the employers and sponsors. Despite the need for workers, they advise them not to return at the present time. Currently, there is a coordination between the municipality and the army to allow refugees to return to take their belongings with a guarantee that they won't be assaulted. But, 70% of Syrians refuse to register their names to take their belongings as they have become unusable".

Tariq Al-Hajjar, legal advisor to Euro-Med Monitor, said that Lebanon’s failure to sign and accede to the 1951 United Nations Convention relating to the Status of Refugees in order to free itself from its obligations towards refugees does not exempt it from its commitment to the basic principles of international and humanitarian law and the international norms enshrined in the Lebanese constitution, specifically in Paragraph B, which states that "Lebanon is also a founding and active member of the United Nations Organization and it abides by its covenants and by the Universal Declaration of Human Rights. The Government shall embody these principles in all fields and areas without exception". Al-Hajjar affirmed that this commitment must provide the necessary protection for Syrian refugees and their minimum rights in cooperation with the specialized international organizations and bodies, which must play a full role and assume their responsibilities.

The Lebanese authorities should:
•      Take the necessary measures to hold the perpetrator of the murder accountable through a fair trial;
•      Work to ensure the security and safety of Syrian refugees in the town of Bashirre, including protecting them from reprisals, and prohibiting discriminatory practices against them;
•      Curb the escalation of hate speech against refugees especially blaming them for all the unrests that afflicted Lebanon;
•      Along with international bodies, especially the High Commissioner for Refugees, the Lebanese authorities should shoulder their responsibilities in providing the necessary assistance to refugees fleeing the town of Bashirre;
•      Work to secure their return to the town while providing them with protection from any possible aggression.