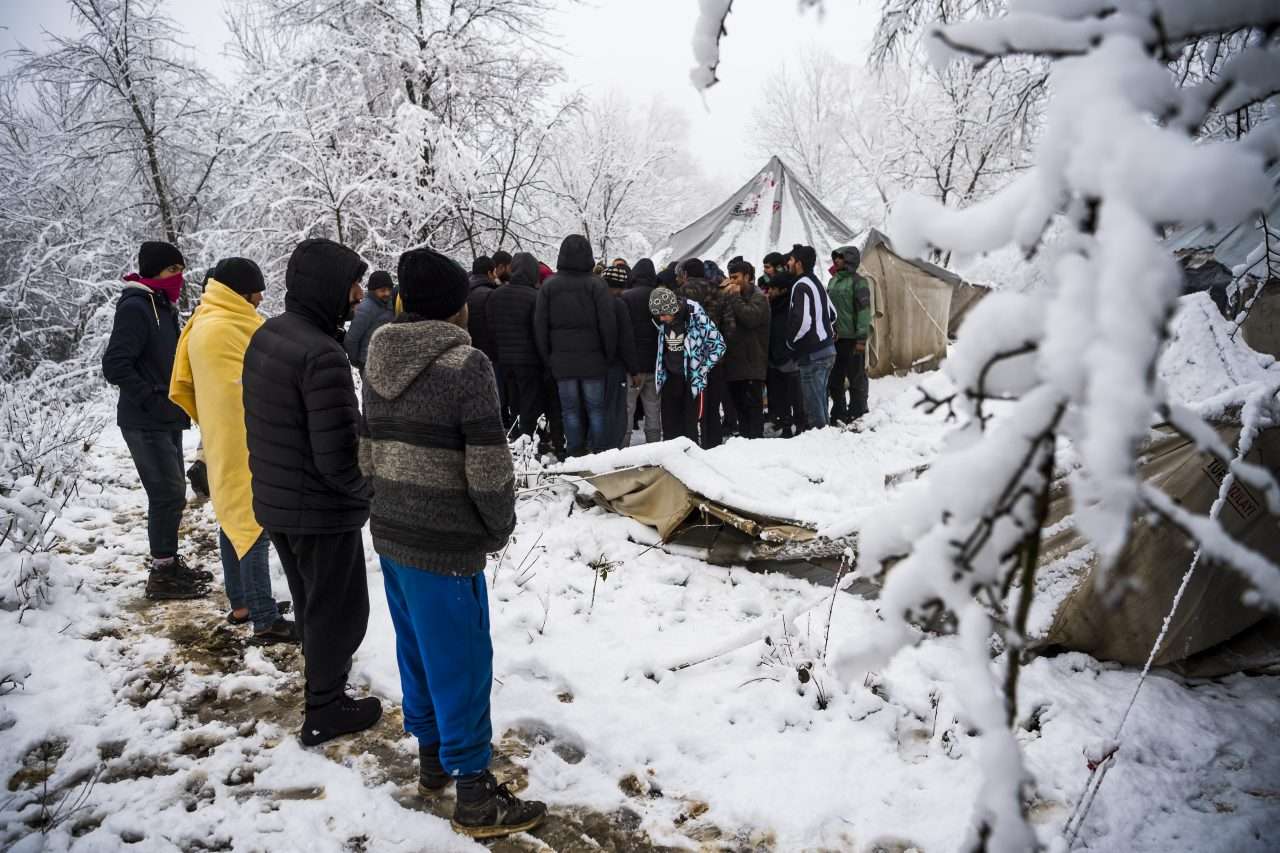 Thousands of migrants sleeping rough in northwest Bosnia risk freezing to death after the first heavy snowfall covered their flimsy tents, Euro-Med Human Rights Monitor said in a statement today. This mounting tragedy is the result of overcrowding in official centers and violent pushbacks at the Croatian borders, which prevent asylum seekers and migrants from finding a safe refugee with adequate living conditions.

The snowfall since last Wednesday in Bosnia has dangerously worsened the conditions of about 3,000 migrants and asylum-seekers forced to sleep rough in more than 250 improvised camps in Una-Sana Canton. In October, the UN migration agency IOM has already started distributing sleeping bags, blankets, shoes, hygiene packages, food and winter clothes to migrants living in this area, in what it has called "an urgent operation to save lives." However, as long as the EU and Bosnian government aren’t stepping in, the UN’s efforts on their own won’t be sufficient to ensure the safety and dignity of migrants.

Migrants in Bosnia are often unable to find accommodation in official reception centers, either because they have been closed by local authorities, as the Bira center in Bihac, that used to provide 1,500 beds, or because they are dangerously overcrowded, as the Lipa center.

As the final departure point for trying to enter in Croatia and EU zone, Una-Sana Canton has become a growing hub for migrants and asylum seekers hoping to cross the nearby border. For them the freezing weather is not the only threat, as snow allows authorities to track their footprints and hunt them better.

In the last three years, several human rights’ organizations have been reporting that the Croatian police have systematically assaulted and used violence against migrants and asylum seekers to push them out of EU zone, back to Bosnia and Serbia. In September, Amnesty International filed a complaint against the European Commission because it failed to concretely address the allegations of serious human rights’ violations committed by Croatian authorities.

“The first heavy snowfall is a concrete warning of an impending humanitarian crisis” said Michela Pugliese, legal researcher at Euro-Med Monitor, “As temperatures are about to fall well below zero, Bosnia should urgently find indoor, safe and warm accommodations for thousands of migrants trapped in Una-Sana Canton and struggling in the biting cold”.

Euro-Med Monitor calls on the government of Bosnia and Herzegovina to urgently identify and open additional accommodation sites for the migrants stranded without proper shelter, in compliance with international law; particularly with Art. 25 of the Universal Declaration of Human Rights and Art. 11 of the International Covenant on Economic, Social and Cultural Rights, recognizing the right of everyone to an adequate standard of living, including adequate housing.

Euro-Med Monitor calls on the EU to urgently establish a monitoring mechanism in Croatia to ensure that the authorities deployed at the borders respect migrants’ fundamental rights and European law, including their safe access to asylum procedures.

The EU asked the Bosnian government to take action to protect migrants and asylum seekers moving in large numbers in northwestern Bosnia and Herzegovina after the first snowfall covered their fragile tents and urged the authorities to transfer migrants to the EU-funded facilities during winter and to open new ones.