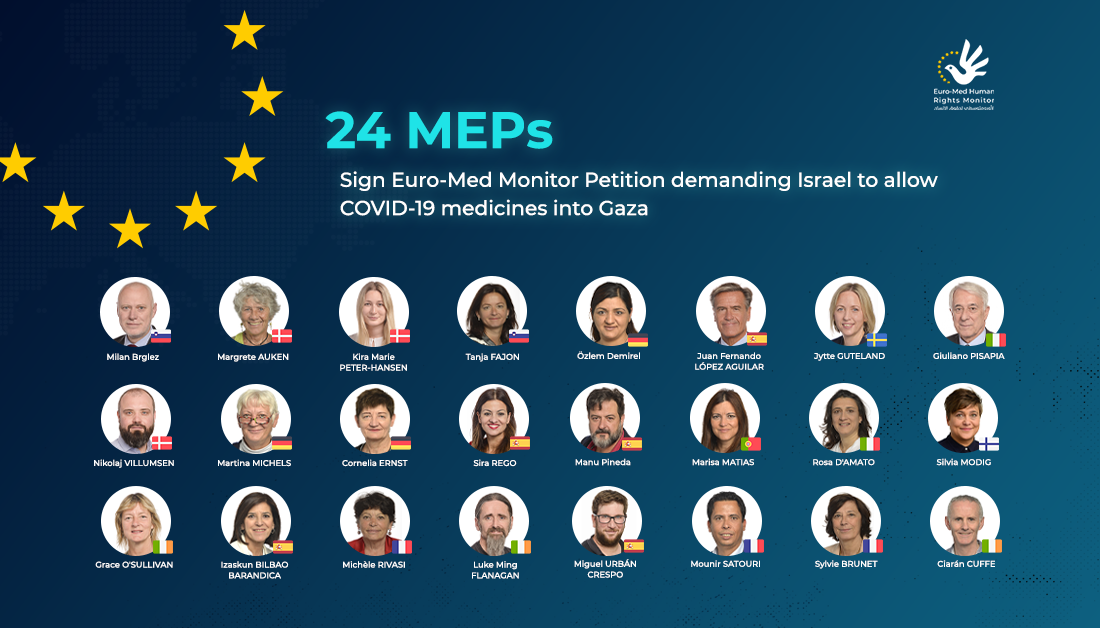 Twenty five Members of the European Parliament including Manu Pineda, the Chair of the Delegation for Relations with Palestine, signed a petition launched by the Geneva-based Euro-Mediterranea Human Rights Monitor which called on the Israeli government to lift its siege of Gaza and allow COVID-19 medical supplies in light of the recent spike in the number of COVID-19 cases in the coastal enclave. The MEPs expressed their concern about the latest spike in COVID-19 cases in the Gaza Strip, noting that the exceptional situation in Gaza “requires immediate action to allow medicines, protective gears, masks, and ICU-units into the territory.” The petition was launched at a critical time as Gaza lives its 14 years of siege, following the Palestinian Legislative Elections of 2006, after which the coastal enclave was placed under Israeli and Egyptian siege, which has exhausted its healthcare system.

“Today, the numbers of COVID-19 cases, which are spreading like fire in refugee camps in Gaza, are telling of the catastrophic situation there. We call on the international community to immediately end the siege of Gaza, allow medical supplies and allocate vaccines for the Gaza Strip, where many face an imminent death,” said Dr. Ramy Abdu, Euro-Med Monitor Chairman. “The Israeli government has to end its siege of Gaza now, and WHO should make sure Palestinians, whose healthcare system is collapsing, have access to decent healthcare. The situation in Gaza is no longer acceptable and we thank the MEPs for their stance to end the siege and help Palestinians as the pandemic is spreading”.

As of now, 32% of basic medicines and 62% of laboratory drugs are not available in the coastal enclave. Hospitals in Gaza are running out of their capacity. Considering the current rates of the spread of the virus, the Gaza Strip will not be able to cope with thousands of COVID-19 cases a day.

The petition signed by the MEPs noted that “Palestinian patients go through prolonged processes to cross the borders into Israel and Egypt. Many of them died waiting for permits to be issued. Many health facilities were destroyed during repeated conflicts.” This requires an immediate international intervention to save those Palestinians.

“Gaza is one of the most densely populated places on earth. The skyrocketing numbers of COVID-19 cases speak of this density,” the petition read.

Euro-Med Monitor’s petition called on the European Union to send immediate medical aid to the Gaza Strip through the World Health Organization (WHO), as nearly 90% of Gaza’s ICUs are occupied with COVID-19 patients. The MEPs called on the governments of Israel and Egypt to immediately lift their blockade of Gaza and allow in the much-needed medical aid.

The MEPs called on all parties to the conflict in Gaza to save the civilians from the plight of COVID-19, and to put their differences aside. The petition concluded by calling on the Palestinian Ministry of Health to collaborate with the local health authorities in Gaza and WHO, by increasing the Gaza health budget to combat COVID-19.  The 25 MEPs called on the EU to work with major powers and the UN to make sure that Gaza, which was described by a UN report as unlivable, has its share of COVID-19 vaccines.