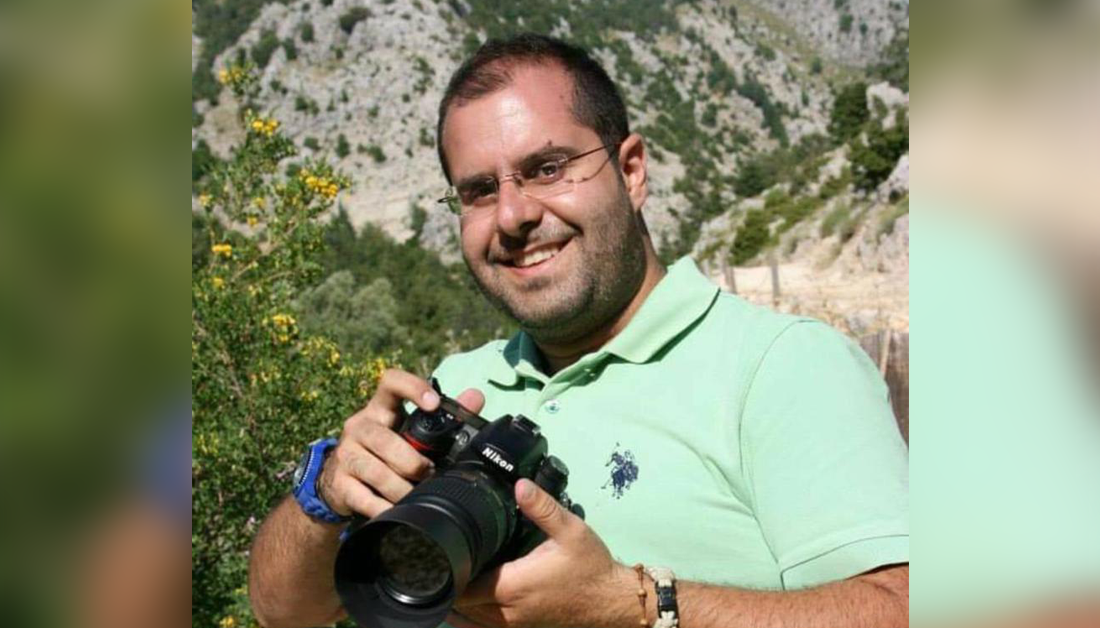 Geneva – Unidentified gunmen shot Lebanese photographer Joseph Bejjani dead at the front steps of his home in Kahala town, to the east of the capital Beirut, on Monday morning, the Euro-Mediterranean Human Rights Monitor said in a statement. A video clip from a surveillance camera near the victim's house, which the Euro-Med Monitor’s digital team watched, showed two armed men approaching the victim's vehicle once he closed the driver seat’s door.

One of the two gunmen opened the door and fired four fatal bullets from zero distance at him then searched the victim’s belongings and seized his mobile phone before closing the door and leaving the area along with another person who assisted him in the murder. Bejjani was transferred to the Saint Charles hospital, where his death was announced. In the meantime, the Lebanese security services closed the area near Bejjani's house to collect evidence.

Bejjani worked as a military photographer for the Lebanese Army for about 15 years before he resigned this year and started working at a local telecommunications company. Upon his resignation, he wrote on Facebook: “After 15 years of focusing on military photography in Lebanon and abroad to show the image of progress, strength, and civilization of the Lebanese army to the world, today, I decided to retire... One has to beg them to get them photographed. And once you do photograph them you feel like a terrorist.

Cover up what you have seen from me. Let me photograph those who appreciate”. People of Kahala held a sit-in in front of the town's church, blocking a highway, to express their anger at the crime. We got used to the fact that the crimes go without accountability. We are having this sit-in so that this crime doesn’t go unpunished like the other crimes,” a resident from Kahala said.

“It is unbelievable that a peaceful person gets killed in a terrible way without committing any crime. Our country has become violated due to repeated crimes. We call on the security services to reveal the particulars of the crime as soon as possible so that the situation does not get worse”. This assassination was not the first of its kind recently. At the beginning of December, retired colonel Mounir Abu Rajeli, was found dead inside a house in Jbeil west of Lebanon, after he was severely beaten and hit on the head with a sharp instrument, weeks after he was summoned for interrogation over the Beirut explosion.

Anas Aljerjawi, Euro-Med MENA Regional Manager, warned against the fact that Lebanon may slide into a chaos of assassinations and killings, calling on the Lebanese government to direct the competent authorities to investigate the assassinations, prosecute the perpetrators, and hold them accountable. “Lebanon cannot handle more crises as the political and security conditions are too fragile,” Aljerjawi added. “Any crime of such kind will destabilize situation, especially given the complexity of the demographic and political situation”.

The International Covenant on Civil and Political Rights stipulates in Article 6 that: “Every human being has the inherent right to life. This right shall be protected by law. No one shall be arbitrarily deprived of his life”. Therefore, the Lebanese government should put an end to illegal assassinations and ensure the protection of civilians’ right to life as one of the fundamental rights. The Lebanese authorities should open an immediate investigation into the assassination of Bejjani, hold the perpetrators accountable, bring them to justice, and save the country from dramatic scenarios that may lead to unknown results.