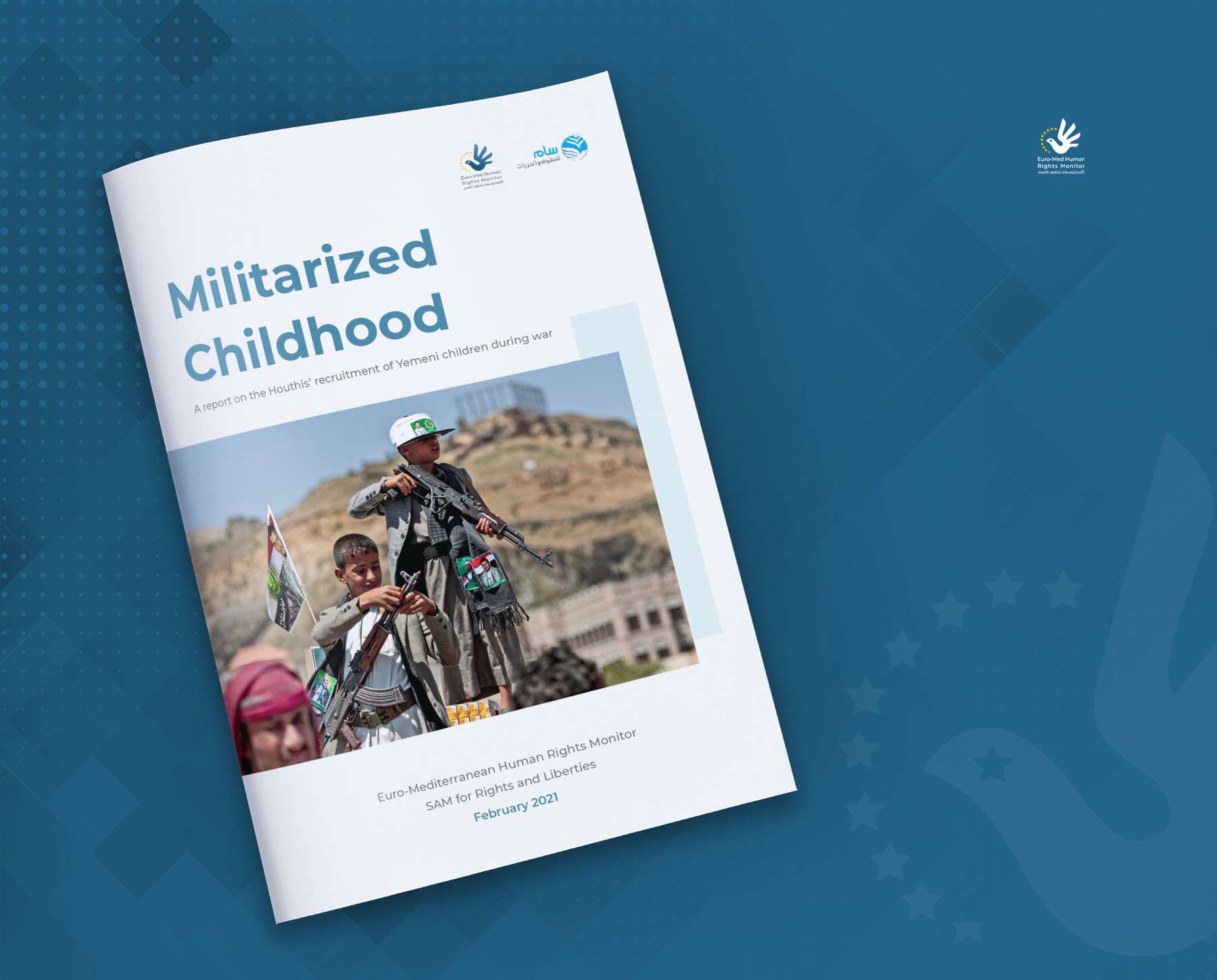 Geneva – The Euro-Mediterranean Human Rights Monitor and the SAM for Rights and Liberties said in a report released today that the Houthis have forcibly recruited 10,300 children in Yemen since 2014, warning of dangerous consequences failing to address this phenomenon might cause.

The report, the two organizations released on the “International Day against the Use of Child Soldiers” (also known as Red Hand Day), which falls today February 12, stated that the Houthis use complex patterns to forcibly recruit children and put them in hostile areas under its control in Yemen. Many children killed, as a result, and hundreds were injured. The report documented the names of 111 children who were killed during the battles between July and August 2020 only.

The report, entitled “Militarizing Childhood”, highlighted the Houthis’ use of schools and educational facilities to lure children to recruitment. The group uses an education system that incites violence and teaches the group’s ideology through special lectures inside the official educational facilities to fill students with extremist ideas and encourage them to join the fight to support the group's military actions.

The report indicated that during the past three years (2018, 2019, 2020) the Houthis began an open and compulsory campaign to recruit children. The group opened 52 training camps for thousands of adolescents and children in Saada, Sanaa, Al Mahwit, Hodeidah, Tihama, Hajjah and Dhamar, targeting children 10 years old or above.

The methods the Houthis use to recruit children include ideological programs before sending them to training camps to attend a one-month military course. After that, they are sent to battlefronts to participate in direct clashes, laying mines and guarding military points.

The Houthis threaten Yemeni families in the villages and areas under its control to force them to allow recruitment of their children, including children in displaced camps and orphanages. In some cases, the group has recruited children from poor families in exchange for monetary rewards ($150 per month).

The two organizations collected several testimonies of children recruited by the Houthis. F.A., 14, one of the children the Houthis recruited on Nihm battlefront said: “I was assigned with loading the guns and transporting them with foodstuffs to high, rugged areas. It was hard and exhausting. I used to get beaten and reprimanded when I arrived late. I cried a lot during those nights, fearing for my life and for missing my mother, father and brothers”.

The testimonies indicated that the Houthis give recruited children sever punishments if they fail to carry out their orders correctly, such as food deprivation, imprisonment, physical and sexual assaults, and death threats.

said: “The United Nations should not tolerate this large-scale recruitment of children by the Houthis in Yemen. This dangerous phenomenon should be at the top of the priorities in the periodic discussions between the group’s delegations and UN representatives”.

“However, what is more troubling is not only the inclusion of children in military operations but feeding their simple minds with extremist ideas and filling them with hate speech and violence, and thus creating future extremists who may not be easily controlled given the huge number that the group recruits or aims to recruit in the future.”

Child recruitment is a war crime according to the Rome Statute of the International Criminal Court, as “Conscripting or enlisting children under the age of fifteen years into the national armed forces or using them to participate actively in hostilities” falls within the court's definitions of war crimes that trigger international criminal responsibility against their perpetrators.

Euro-Med Monitor and the SAM called on the Houthis to immediately stop recruiting and exploiting children, as this poses a great threat to their lives and future, and a serious violation of their rights guaranteed in the relevant local and international charters and norms.

The two organizations called on the Security Council to refer the issue of child recruitment in Yemen to the International Criminal Court as a war crime under the Rome Statute that governs the court. It also urged the Special Representative of the Secretary-General for Children and Armed Conflict to visit Yemen as soon as possible to conduct a direct assessment of child recruitment in areas controlled by the Houthi movement.

The Yemeni government should treat child prisoners in accordance with the relevant international protocols, and to involve them in special rehabilitation programs to get rid of the effects of war, and to facilitate the process of their integration into society.