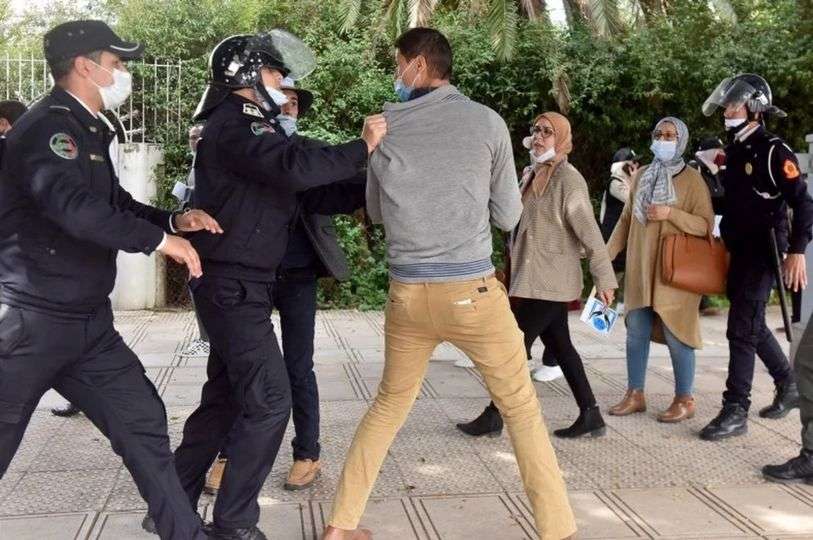 The Moroccan authorities’ crack down on teachers’ peaceful gatherings in the capital Rabat shows unprecedented level of repression, the Euro-Mediterranean Human Rights Monitor said in a statement. The government should stop using security force to deal with popular protests.

The Moroccan security forces dealt with hundreds of teachers who demonstrated on Tuesday and Wednesday in the streets of Rabat with excessive violence. This led to the injury of dozens of teachers, while the authorities arrested dozens of others.

Euro-Med Monitor’s digital team received dozens of photos and videos that showed uniformed security personnel and others in civilian clothing assaulting teachers, beating them with sticks and batons, kicking them, and chasing them through alleys to arrest them.

The organization viewed testimonies of a number of teachers who participated in the demonstrations. Saeed Ahmed (a pseudonym) said: “On Tuesday, we were violently attacked by security personnel and civilians cooperating with them. They were mostly targeting teachers who documented the repression with their mobile phone cameras. They confiscated many phones, and prevented teachers from speaking to the media”.

“The next day, we regrouped to go to sit-in outside the Parliament, but the security forces surrounded us near Bab El Had Square, dispersed us and chased the groups that tried to regroup and arrested a number of teachers.”

The contractual teachers’ sit-in in the capital, Rabat, comes weeks after they went on strike and organized protests in a number of Moroccan cities, calling for integration into the public sector.

Euro-Med Monitor's MENA Regional Manager Anas Aljerjawi, said that “the shocking scenes from Rabat’s streets show an unprecedented level of oppression and disregard for human dignity, and reflects a bleak picture of Morocco's respect for the basic rights of its citizens”.

Aljerjawi said: “The contractual teachers did not commit any serious violations that required such violent security handling. The teachers’ protests are no more than a peaceful means of expression guaranteed in the relevant local and international laws”.

“However, this brutal treatment indicates that the authorities wanted, through the crackdown, to send a message of intimidation to the street, and to show its determination by not tolerating any popular or union protest.”

The Moroccan constitution explicitly prohibits attacks on citizens and threatens their dignity, as Article 22 stipulates that: “The physical or moral integrity of anyone may not be infringed, in whatever circumstance that may be, and by any party that may be, public or private. No one may inflict on others, under whatever pretext there may be, cruel, inhuman, [or] degrading treatments or infringements of human dignity”.

The constitution also guarantees freedom of opinion, expression, and peaceful assembly, as it is stated in Article 29 that: “The freedoms of reunion, of assembly, of peaceful demonstration, of association and of syndical and political membership [appartenance], are guaranteed. The law establishes the conditions of the exercise of these freedoms.”

The Moroccan authorities should:

• conduct a transparent and independent investigation into the serious attacks on contractual teachers’ protest to bring those responsible to justice and ensure that this dangerous intrusion on Moroccans’ rights and freedoms is not repeated;

• start a dialogue with the contractual teachers to reach a solution that preserves their legal rights, away from resorting to security solutions that deepen the crisis and eliminate opportunities for agreement on appropriate solutions.