Euro-Med Monitor warns of a humanitarian crisis in Gaza 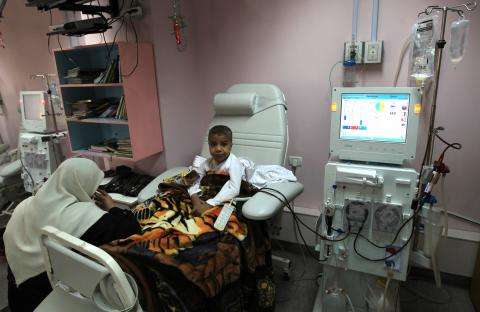 Geneva – Euro-Med Monitor for Human Rights warned of the consequences of a looming humanitarian crisis in the Gaza Strip due to the worsening fuel shortages.

These shortages impact the public services provided to Gaza residents accompanied with environmental and humanitarian crises threats that might paralyze all aspects of life in the strip.

In a statement issued on Friday (7/5/2013), Euro-Mid, the Geneva based organization, is alarmed by the deteriorating humanitarian conditions in Gaza which is expected to exacerbate in the light of the ongoing political crisis in Egypt, unless the international community intervene sooner to provide Gaza with the needed relief, and avoid further repercussions on 1.7 million people.

It said that the recent Egyptian security restrictions in the border areas led to shut tunnels that are described as the only main lifeline to provide Gaza with fuel supplies, commodities, and goods that alleviate impacts of the Israeli siege which was imposed on the strip seven years ago.

Eyewitnesses told the Euro-Med Monitor that Egyptian Army bulldozers destroyed number of tunnels that are used to transport goods.

The human rights organization noted that the ongoing gas shortage reached an alarming level, warned of a real catastrophic situation within hours in public hospitals and health centers, which currently lead to reduction in some ambulance services, except in emergencies.

The Euro-Med Monitor pointed out that the impact of the fuel shortage is extended to the fishing sector, which is threatened by stopping the work of 4000 fishing boats in Gaza in case they couldn't get the required amounts of fuel.

It said that this tragic hardship adds more to the suffering they've been through during the blockade where they can't sail for more than 6 nautical miles in the Mediterranean sea.

Euro-Med Monitor added that the cars in Gaza are might be out of fuel, alongside with environmental and humanitarian crises, which will affect the water, sewage, and sanitation services.

As for electricity in Gaza, it asserted that the crisis is leaving the electricity services with deep impacts in different levels, especially pumping the sewage water to the sea, which can cause a real environmental catastrophe.

The eight sewage treatment plants in Gaza need fuel to generate electricity during the frequent power cuts. In case, this fuel is not available, parts of Gaza city will sink in sewage water.

Euro-Med Monitor  referred to the growing gas shortage crisis. It mentioned that while Gaza strip needs 250 tons of gas daily, it just receive about 130 tons in average via Kerem Shalom crossing with Israel, with a deficit of about %50 every day.

In the light of the recent threats to the humanitarian situation, Euro-Med Monitor urged the international community to act immediately to deal with the consequences of the current crisis, open all Gaza crossing, and put more pressure on Israel to lift the ongoing blockade completely and instantly.