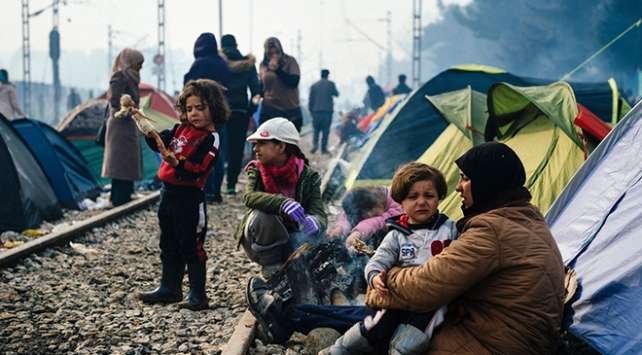 European member states should consider children on the move as children, first and foremost, rather than migrants, Euro-Med Human Rights Monitor said in a statement today; the EU should consequently abide by relevant International Law that put children’s best interests first in any policy consideration.

In Late March, the Spanish NGO, Proactiva Open Arms, managed to rescue 219 migrants in distress at sea, including 2 pregnant women and 56 minors, with 12 of them unaccompanied and separated and 17 under the age of 10. Despite the fact that rescued migrants incurred two medical emergencies while stuck on board – including one emergency with a seven-year-old girl – Italian and Maltese authorities have repeatedly denied the ship’s requests to disembark for five consecutive days before they were eventually allowed to land in Pozzallo, Italy.

This incident constitutes a blatant disregard for the best interests of children on board, whose life could have been endangered by the confinement on a ship for such a long period of time. It highlights how migrant children are often subjected to the same criminalization and inhuman treatment as adult migrants and represents the latest case of a forming pattern of EU member states opting for policies that value containment over human life, disregard over compliance with international law.

For instance, on 16 March, a two-year-old Malian girl died in hospital in Spain after having been rescued from a boat packed with 52 sub-Saharan Africans. The baby, travelling with her mother and sister, was found already unconscious at the time of the rescue. Being at sea for four hours, she suffered severe hypothermia and had a cardiac arrest because of the cold.

Such incident emphasizes the grave dangers of deliberately or inadvertently abandoning migrants and asylum seekers in distress at sea for long periods of time before rescuing them.

In another disturbing incident, defined as “the massacre of children” by the Italian Press, 200 migrants lost their lives including 60 children in October 2013, when a fishing boat carrying more than 400 migrants departed from Libya capsized in the Central Mediterranean, while trying to reach Italy. Despite the numerous distress calls forwarded to both the Italian and the Maltese authorities, nobody came to their rescue for four hours, leading to that harrowing result.

This January, the United Nations Human Rights Committee condemned Italy for failing to protect the right to life of those people who were aboard, as its navy ship, ITS Libra, was located only about an hour away from the scene of the shipwreck. “Italy’s delayed action had a direct impact on the loss of hundreds of lives” said Ms. Tigroudja, a member of the Human Rights Committee.

Euro-Med Monitor is seriously concerned that procrastination in the rescue of migrants and asylum seekers in distress at sea may be used as a punitive measure to deter people – whose only crime is fleeing conflicts and persecution – from trying to pursue a safe refuge in Europe as guaranteed to them under International Law.

International law provides that children on the move are seen and protected as children, rather than migrants, and that every person under 18 years is entitled to child-sensitive procedural safeguards. As enshrined in Art. 24 of the EU Charter of Fundamental Rights, “children shall have the right to such protection and care as is necessary for their well-being” and “in all actions relating to children, whether taken by public authorities or private institutions, the child's best interests must be a primary consideration”. The principle of the best interests of the child is derived from Article 3 of the Convention on the Rights of the Child (CRC), the most widely ratified international human rights’ treaty, ratified by all EU countries.

“The principle of the best interests of the child should override all others, including conflicting orders or restrictive migration policies,” said Michela Pugliese, Migration Researcher at Euro-Med Monitor, “All authorities that come into contact with migrant children are required to make sure that their operations are primarily concerned with protecting the interests, rights and needs of each child.”

Pugliese added that “to determine what is in the best interests of each child requires a clear and comprehensive assessment of the child’s identity, including her/his nationality, ethnic, cultural and linguistic background, particular vulnerabilities and protection needs. Allowing the child access to the territory is the elementary prerequisite to her/his protection and to this initial assessment process.”

Alongside the right to life (Art. 6 of the CRC) that goes beyond the bare physical survival to include the development of the child “to the maximum extent possible” and the prohibition of torture (Art. 37 of the CRC) that protects all children, regardless of location or legal status, General Comment No. 6 of the Committee on the Rights of the Child provides further guidance on the protection of children on the move and particularly unaccompanied and separated children. This includes inter alia that all such children should be identified and registered as soon as possible following their entry into the host country. Also according to the UNHCR Guidelines, asylum claims made by children, whether accompanied or not, should be processed on a priority basis, also with reduced waiting periods at each stage of the asylum procedure.