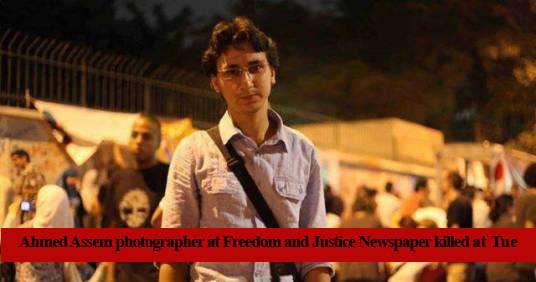 Euro-Med Monitor for Human Rights criticized the deterioration of media and press freedom in Egypt since the beginning of July 2013, after the military establishment takeover of the power in the country.

The Geneva-based organization said, in a statement published on Thursday (11/7/2013), that it documented 74 violations against journalists, local and foreign media organizations in Egypt since the ouster of the president Mohammed Morsi one week ago.

Euro-Med Monitor considered that the arbitrary arrests of many journalist illegally and without a court order, are one of the serious recent violations, in addition to number of documented arrests were made by security members without being in official uniforms.

It added that the pledges made by the General Abdel-Fattah Al-Sisi, and the interim president Adly Mansour in regard to protect the civil liberties and avoidance of exclusion, didn't withstand the security apparatuses practices on the ground.

The Egyptian security members started in the early hours of the coup by shutting down 5 satellite channels, including "Misr 25" during a live broadcast, in addition to another 3 channels including Aljazeera, Aljazeera Egypt, and Amjad, and confiscated their equipment.

Euro-Med Monitor expressed its disappointment over the current setback in press freedom in Egypt, where the positive atmosphere didn't last long after the collapse of Hosni Mubark's regime in 2011, and after the decision made by the ousted president Morsi which abolished the precautionary detention of journalists in publishing cases in August 2012.

Today, the security strong grip returned to put restrictions that determines the limits of press freedom in Egypt. Therefore, Euro-Med Monitor demanded the country's interim authorities to immediately correcting the current security behavior towards media organization, referring to the arrest of four Turkish journalists on Tuesday.

Euro-Med Monitor's regional director, Amani Al-Senwar expressed fears of turning Egypt into an inappropriate environment for media freedom, where the interim authorities contributes to the creation of a hostile atmosphere against media organizations and reporters who are not related to or affiliated with the current security system which controls the country.

In this matter, Al-Senwar referred to the recent violations against CNN's reporter during his live reporting in Tahrir Square in Cairo, and expulsion of Aljazeera's reporter from a joint press conference for the Army and Interior Ministry spokespersons.

She expressed deep concern towards the security officals' pretexts to justify their press violations that would impose more restrictions on press freedoms. Such security measures would increase tensions and violence within the Egyptian society in an attempt to restore press freedoms, al-Senwar pointed out.

She noted that this behavior is going to increase the ongoing tension, lack of confidence, and skepticism among Egyptians, and open the doors to violence as a possible way to break the current restrictions on freedoms.