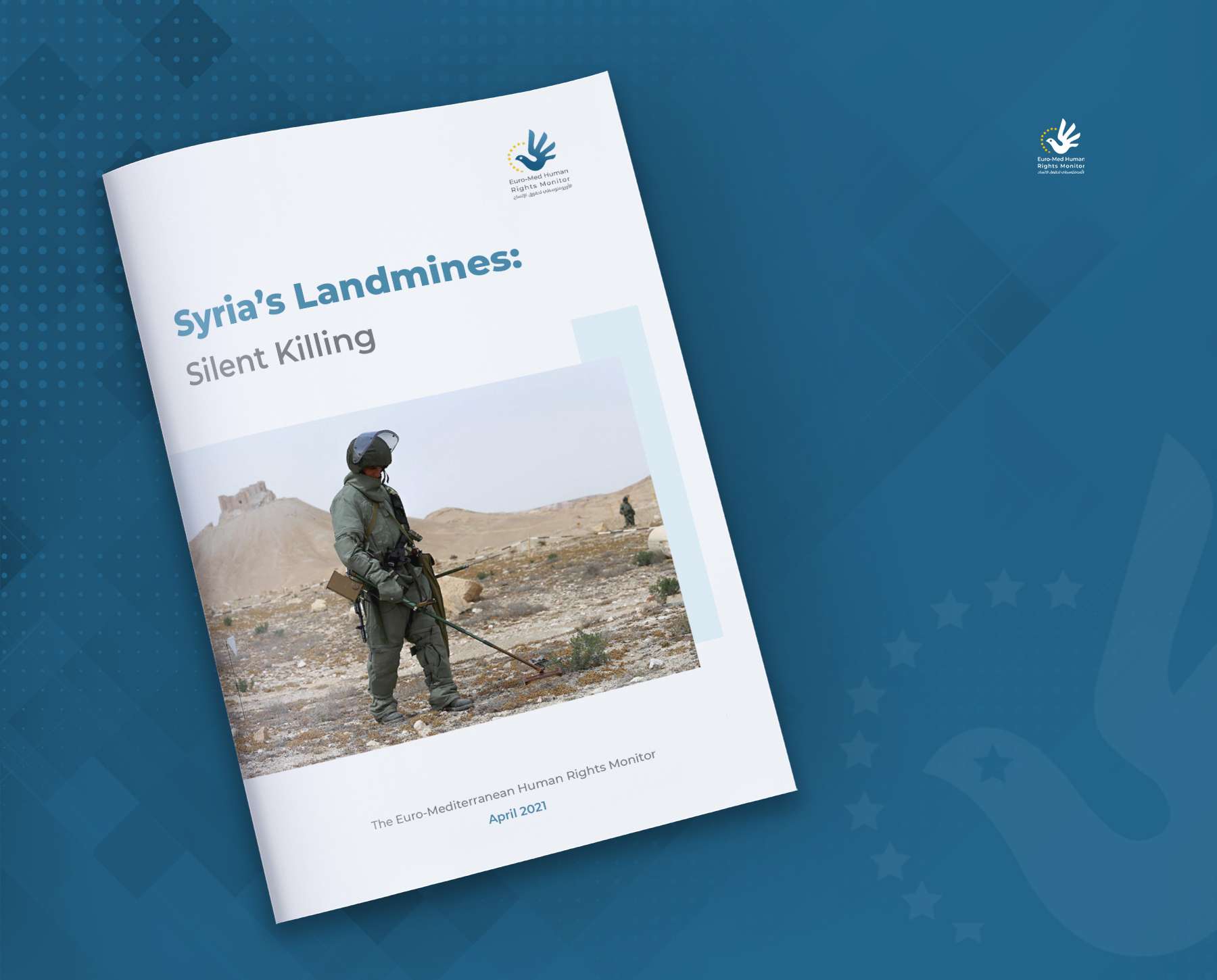 Geneva - Landmines scattered across various conflicted areas in Syria endanger the lives and safety of civilians, the Euro-Mediterranean Human Rights Monitor said in a report . All parties to the conflict should stop using landmines, uncover their locations and cooperate to neutralize their danger.

The report highlighted the large use of mines in the Syrian conflict, as there are still a huge number of them scattered among civilian homes and in agricultural lands. They are a result of the extended military operations during the past years up until the present day.

The human and material losses caused by landmines would continue for a long time, even after the end of the conflict. This sensitive issue is not addressed urgently by the competent authorities’ cooperation with the parties in the conflict, despite its seriousness.

Incidents of land mine explosions and falling of victims have increased despite the decline in military operations, due to the lack of accurate information regarding their whereabouts and the modest efforts to detect and combat them.

The report showed that  between March 2011 to March 2021, mines in Syria  had killed about 2,637 civilians, including 605 children, 277 women, eight medical personnel, six civil defense workers and nine media personnel.

Most of the victims of these mines were from the governorates of Aleppo and Raqqa. Their percentage exceeded half of the total victims by about 50.5%, followed by Deir Ezzor governorate, in which the rate of victims exceeded 16%, and Daraa 9%, then Hama 8%. The rest of the governorates’ percentage was about 16.5%.

The report included testimonies of civilians who fell victim to mines planted near their homes or farms. A landmine explosion injured a child, Omar al-Halabi from Deir Hafer in the eastern countryside of Aleppo. He says: "While I was playing with my friends near the house. We saw a piece of iron in the shape of a ball, so we approached it and played with it until it exploded, and later  became clear that it was an explosive mine. I lost my hand and my feet as a result of the explosion. I was able to install two prosthetic limbs seven months later.

Euro-Med Monitor legal advisor Tariq Al-Lewa said that although the various parties to the conflict have been involved in planting mines, the greater responsibility lies with the Syrian regime forces considering the military equipment and diverse armament they have. Many of the Russian-made mines are only owned by the regime forces, such as the sea mines, which  were dropped on civilian areas by the regime's military helicopters.

Al-Lewa points out that the use of mines is prohibited according to the relevant international covenants, foremost of which is the Ottawa Treaty of 1997.  Syria refused to sign this convention, along with the Rome Statute that prohibits such practices, considering mines are a weapon targeting civilians who do not participate in hostilities

The report included a breakdown of the different types of mines that are used in the Syrian conflict, including what are locally called as as Al–Mastara (ruler), Al-Misbaha (rosary), Hajar (stone), Al-Lizar (laser), and Al-Doussa. These are hidden landmines that explode upon approaching them, touching them, or touching something connected to them.

All the parties to the conflict in Syria, mainly the Syrian regime forces, should stop planting mines and destroy their stockpiles, and cooperate with the specialized teams to uncover their locations, neutralize them and place warning signs where they are likely located.

The United Nations' relevant agencies should to launch an extensive program to clear conflicted areas in Syria of mines and secure financial funds, equipment, techniques and specialized human cadres to contribute to protecting the lives of Syrian civilians.