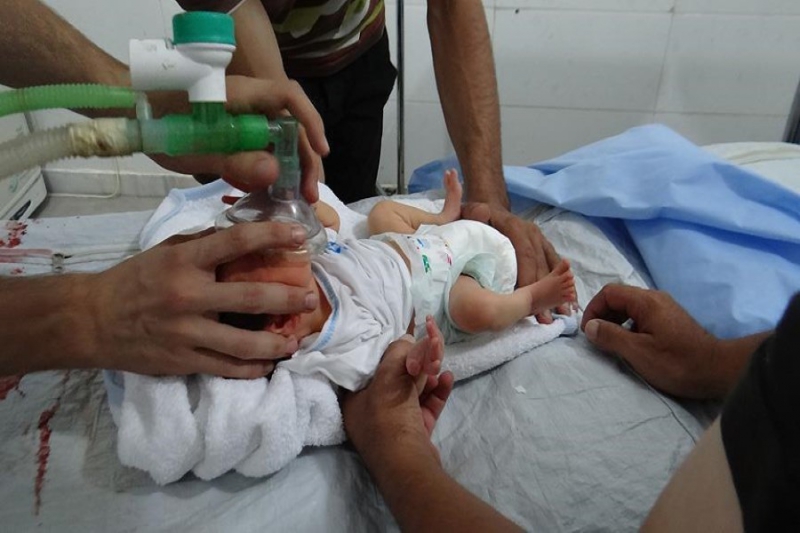 Geneva – The Organisation for the Prohibition of Chemical Weapons (OPCW) has released is findings in  the second report by the OPCW Investigation and Identification Team (IIT) regarding the attack on Saraqib city, northern Syria on 4 February 2018 which confirmed the Syrian army was responsible for targeting the area with chlorine gas,  the Euro-Mediterranean Human Rights Monitor said.

After a comprehensive investigation into all the causes of the accident, the organization reached the conclusion that there are reasonable grounds to believe that at approximately 21:22 on 4 February 2018, a military helicopter of the Syrian Arab Air Force hit eastern Saraqib by dropping at least one cylinder, affecting 12 individuals.

OPCW released another investigation in April 2020, confirming the Syrian regime’s responsibility for sarin and chlorine gas attacks on areas in Hama countryside in northern Syria, which resulted in the injury of about 50 people.In addition to dozens of field evidence and eyewitnesses, the investigation should lead to urgent international accountability for the Syrian regime for its use of unconventional weapons against civilians.

In September 2013, the international parties agreed to destroy the Syrian regime’s stockpile of chemical weapons, and OPCW announced in August 2014 its destruction.. However, field evidence and the attacks  the Syrian regime carried out after, confirms that  these conclusions are mistaken, as the regime continues to target civilians with these lethal weapons without deterrence.

The results of the investigation demonstrate the seriousness of the consequences of the Syrian officials impunity, and the need to hold them accountable for their involvement in crimes against humanity since the start of the conflict in 2011.

In 2013, the Security Council issued Resolution 2118 criminalizing the use of chemical weapons in accordance with Article 7 of the United Nations Charter. In the event of non-compliance with the resolution, the Council must impose the necessary measures in Article Seven.

The investigation, in addition to Canada and the Netherlands announcing in March 2021 that steps are being taken to hold the Syrian regime accountable for its violations against civilians, are positive steps that must be publicized. Concrete steps must also be taken to protect Syrian civilians and preventing their persecution.

The Security Council should take action to put an end to the Syrian regime's use of chemical weapons against civilians, ensure that the regime is permanently stripped of unconventional weapons and hold all those involved in these heinous attacks accountable.