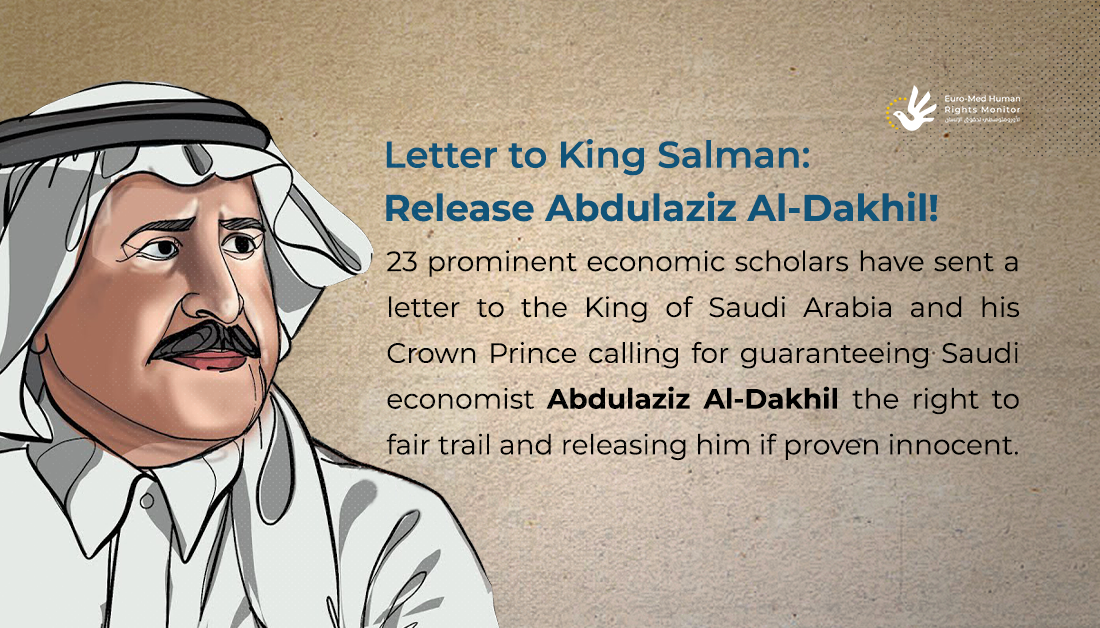 Geneva – Nearly two dozen economic scholars from the world's most prominent universities have signed a letter to the Saudi King Salman bin Abdulaziz and his son, Crown Prince Mohammed bin Salman, demanding the disclosure of  prominent Saudi economist Abdulaziz Al-Dakhil’s fate and ensuring he has a fair trial and released if proven innocent.

In the letter, the academics said the Saudi authorities have been holding Al-Dakhil since April 2020, after mourning the death of human rights activist and reformist Abdullah Al-Hamid who was intentionally neglected of medical care in prison.

​The letter indicated that Al-Dakhil was arbitrarily  detained several times for criticizing the government's economic policies and his anti-corruption calls.

The letter was based on a testimony made by Al-Dakhil’s family to Euro-Med Monitor. The authorities had arrested him without an arrest warrant, confiscated his belongings and money, frozen his bank accounts in the Kingdom, and deprived him of his right to legal representation, Al-Dakhil’s family said.

Al-Dakhil is one of the most prominent economists and academics in Saudi Arabia and former undersecretary of the Saudi Ministry of Finance. He is also a writer, an activist and researcher at Georgetown University, the American University in Beirut and the University of Oxford.

The family attempted to contact official authorities and the royal court to learn about Al-Dakhil’s fate but to no avail, they fear for his life since he suffers from diabetes and blood pressure, the letter said.

The Saudi authorities have a long record of human rights violations and unlawful practices against activists, critics and opponents. The authorities arbitrarily detain critics, deny them legal representation and subject them to secret trials, which completely disregards  Saudi domestic and international obligations, the letter said.

The number of prisoners of conscience in Saudi  is more than 144, including writers, activists, academics, clerics and human rights defenders. They have been arrested and detained for exercising their legitimate rights to freedom of expression.

All arbitrary practices against Al-Dakhil and other prisoners of conscience must  end. These practices violate the Arab Charter for Human Rights, which Saudi Arabia ratified in 2009 that  guarantees the detainees the right to litigate within a reasonable time.

Communication and Advocacy Officer at the Euro-Med Monitor, Ahmed Naouq, said that “the arrest of Al-Dakhil is completely arbitrary as Principle 11 of the United Nations’ Body of Principles for the Protection of All Persons under Any Form of Detention or Imprisonment states that ‘A detained person shall have the right to defend himself or to be assisted by counsel as prescribed by law’ and ‘A judicial or other authority shall be empowered to review as appropriate the continuance of detention’”.

According to Article 114 of the Saudi Law of Criminal Procedure, “the detention shall end with the passage of five days” that can be extended for up to six months by order from the Bureau of Investigation and Prosecution. The same article stipulates that after six months “the accused shall be directly transferred to the competent court or be released”.

The academics who signed this letter  affirmed their shared duty in  shedding light on Dr Al-Dahkil’s situation to the public and pressuring the Saudi authorities to disclose his fate, provide him with his basic rights – including a guaranteed fair trial and immediate release if proven innocent.