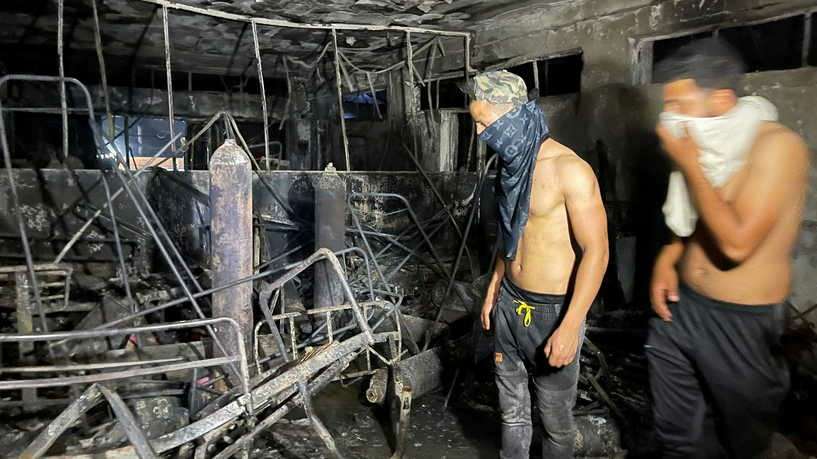 Geneva - Dozens of patients died in a fire that broke out in a hospital designated for COVID-19 patients in the Iraqi capital Baghdad, the Euro-Mediterranean Human Rights Monitor said in statement today, calling on the Iraqi government to open an urgent and transparent investigation into the incident.

The fire at Ibn Al-Khatib Hospital in the Diyala Bridge area, southeast of the capital, killed 82 people and injured more than 110 others last Saturday night, according to a statement made by the Iraqi Interior Ministry.

The statement said an oxygen cylinder in one of the hospital's upper floors exploded and the fire expanded aggressively due to a lack of firefighting systems in the hospital.

Local medical sources confirmed the explosion was  due to non-compliance with the safety measures and procedures related to storing oxygen cylinders, which were stored in places containing heat sources that in turn led to this explosion.

Many of the victims suffocated as oxygen supplies to patients on the  ventilators were disturbed after the fire broke out, while others were asphyxiated from excessive smoke inhalation . Some patients were seen jumping from the windows to escape  the flames.

An eyewitness told Euro-Med Monitor: “We were next to the hospital when the fire broke out. We rushed to the hospital  and tried to put out the fire, but we could not. The fire was spreading very quickly to other areas. We waited  for half an hour for the civil defense teams to come”.

“We took out a number of dead bodies from inside the burning building, but we could not identify them because they were severely burnt,” he added.

Ibn Al-Khatib Hospital is an old hospital in Baghdad that lacks adequate safety and security equipment. The hospital does not have a fire-fighting system or sensors to detect fires  at an early stage. In addition, the ceilings of the hospital contained highly flammable cork materials which hastened the spread of the fire.

A woman accompanying her mother, who was a COVID-19 patient, said to Euro-Med Monitor: “I was with my mother on the second floor, where she was getting oxygen through the hospital’s medical gas supply. After breakfast (around 7 p.m.), we heard a loud explosion that shattered the windows and shook the entire building, and smoke started filling the place.  We evacuated the hospital with the help young men who entered the building and  rescued the injured. My mother lost oxygen while walking. We were afraid for her life.

The fire incident is not the first of its kind. A fire had erupted at Al-Furat Hospital, west of Baghdad, in June 2020 in the quarantine rooms designated for COVID-19 patients. The fire caused severe material losses.

The Iraqi Council of Ministers decided after an emergency session to suspend the Minister of Health, the Governor of Baghdad, and the Director of Al-Rusafa Health Directorate Hospitals and investigate their role in the incident,

Omar Al-Ajlouni, legal researcher at the Euro-Med Monitor, said: “Suspending those directly responsible for the accident is not sufficient. The authorities must take radical reforms in the medical sector and designate a greater share of the state budget to develop the  modest medical system.”

“Iraq’s military spending over the past year amounted to more than $1.7 billion, at the same time the World Health Organization data showed that during the last ten years, Iraq spent a very small amount on health spending reaching an average of $161 per capita,” he added.

The Iraqi authorities should: