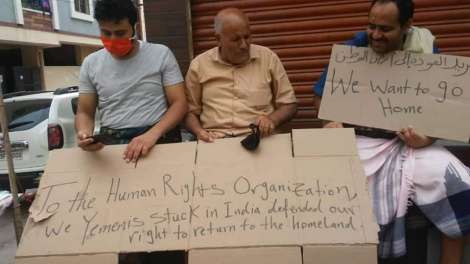 Geneva – Yemenis residing in India have been living in difficult humanitarian conditions as the authorities refuse to renew their residencies and threaten to deport them, the Euro-Mediterranean Human Rights Monitor said today in a statement. The Indian authorities should consider Yemenis exceptional circumstances since they are unable to return to their country.

The living conditions of more than 700 Yemeni students, patients and asylum seekers staying in India has become increasingly unstable as the authorities have refused to grant them with legal documents and instead, seek to deport the migrants back to Yemen in an arbitrary and forceful manner.

These Yemenis have been living in India for about four years, mostly in Hyderabad, New Delhi and Bangalore and are unable to return to Yemen because of the war.

Osama Hassan (pseudonym), a Yemeni master's student in India, told Euro-Med Monitor: “I arrived in India in June 2017 to study a master’s degree. I had obtained a student visa from the Indian embassy in Jordan [which carries out the functions of the Indian embassy in Yemen that cannot operate due to the war]. My wife and child had obtained a tourist visa for a period of six months. The Indian embassy in Jordan informed us that my wife and son could provide a family residence permit upon the expiration of their tourist visas. However, we were surprised when the Indian authorities’ rejected our residence application and asked my wife and son to leave the country”.

He added, "My family is unable to leave India due to the ongoing war in Yemen and the dangerous situation there. But since they remained in India without residency, the Indian authorities accused me of protecting people residing illegally in the country. The authorities ordered me to leave with my family, although I have not yet finished my studies”.

Some of these Yemenis submitted a request to the Indian authorities to correct the situation, but the authorities refused to approve it, which then prompted the Yemenis to submit asylum requests to the United Nations High Commissioner for Refugees, that granted them a “blue card” titled “asylum request”. However, it does not entail any recognizable rights, under the pretext that the conditions in Yemen are safe and stable.

According to testimonies obtained by Euro-Med Monitor, the Indian authorities refused to deal with the blue card holders when presented to them by the Yemeni who would be arrested and detained in a facility designated for persons residing illegally in the country.

Several Yemenis in India told Euro-Med Monitor that the authorities raised the value of the residency fine from $50 to more than $1,000. The authorities imposed on each person in the  family a basic fine of $800, in addition to another penalty estimated by the competent officer. Some families had to pay about $4,000 in total.

Samir Ali (pseudonym), the brother and companion of a wounded man being treated in India, told Euro-Med Monitor: “At the beginning of 2018, I arrived in India accompanying my brother, who was injured during the war. His leg was amputated, and he suffers from impaired brain function as a result of the injury. My residency was initially for six months, which I then renewed twice”.

He added, “In 2019, the Indian authorities refused to renew my residency for the third time and asked me to leave, but I could not leave because of the war in Yemen, and the security risks to my life upon return. Now, I am residing illegally in the country and I might be arrested or deported at any moment, as the authorities ignore the difficult humanitarian conditions we are living”.

Yemenis do not enjoy any recognizable rights in India, as they are prohibited from the right to movement, education, hospitalization, receipt of money, receiving aid, renting housing and other necessary basic rights.

“My son suffers from dehydration and I could not go to the hospital because he does not have a residency permit,” Osama Hassan said about being denied the right to medical treatment for his family.

“My wife also suffers from severe psychological problems due to the war in Yemen, which needs treatment with electric shock, but she was refused any hospital treatment because she did not have residency. Indian hospitals refused to receive those who do not have residencies, even in emergency cases,” he said.

The exceptional circumstances of Yemenis should be considered, especially since the ongoing war has made it impossible for migrants to return to their countries. This is due to the many security risks that threaten their lives and magnitude of destruction to people’s homes.

The Indian authorities should deal in a humane way with the Yemeni migrants in their country and enable them to exercise all their basic rights, which are guaranteed by relevant international charters, norms and local laws.