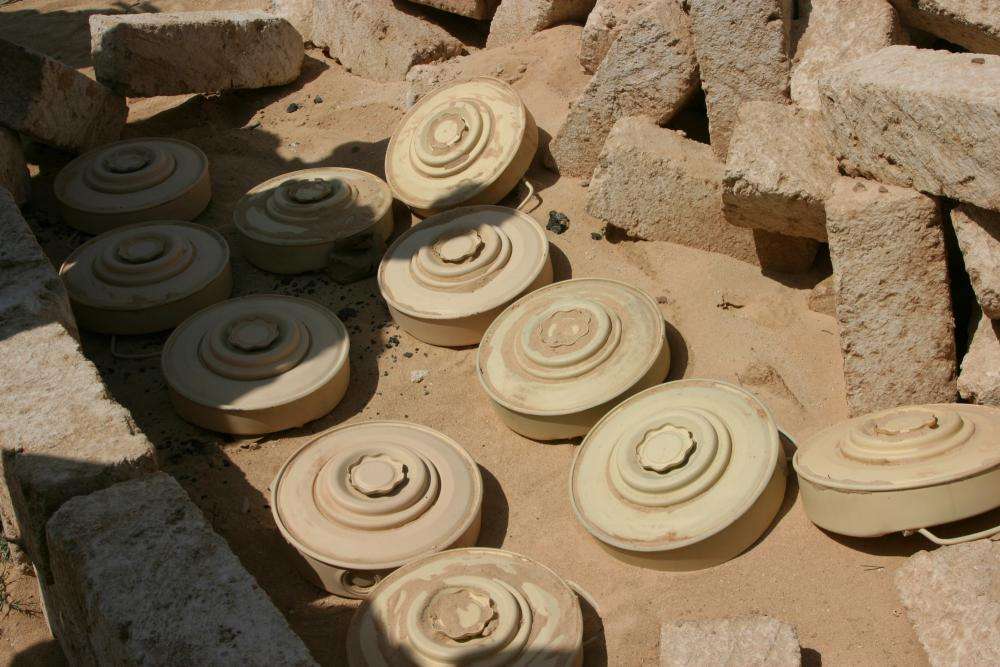 On May 12, 2021, the Euro-Mediterranean Human Rights Monitor participated in the international conference entitled "The Anti-personal Landmine Epidemic and Virtual Contemporary Art Exhibition of Humanitarian Disaster caused by Anti-personal Landmines", hosted by the Global Institute for Water, Environment and Health (GIWEH) and HOPEMAN Consulting UK.

The event examined the current “anti-personnel landmine epidemic” focusing on the case of Armenia and Azerbaijan as well as other conflict and post-conflict zones all around the world, to discuss causes and consequences but also the good practices and possible solutions to protect both the human beings and the environment from landmines and their contamination.

In her statement, Michela Pugliese, Migration Researcher at the Euro-Med Monitor and Speaker at the conference, focused on the Middle East and North Africa region and particularly on Libya and Syria. Both countries have been highly affected by landmines and other explosive remnants of war, especially in the past decade, killing or injuring hundreds of thousands of innocent civilians and causing great suffering in the affected families and communities.

In Libya, the Islamic State organization, also known as ISIS, launched an attack on the city of Sirte and planted mines and explosives inside and on the outskirts of the city, even in homes, farms and roads, both when arriving in 2015 and when withdrawing from the city in 2016. Indeed, in the following year, Libya was among the nine states with the most recorded mine casualties in the world.

Yet the same terrible strategy used by ISIS was replicated more recently both in Sirte and in Tripoli by the forces of the retired General Khalifa Haftar and the Russian Wagner militia supporting him. According to a Euro-Med Monitor’s report, in the first months of 2020, 160 people - including children, women and specialists from the demining teams - were killed or injured due to landmine explosions in Tripoli and its southern suburbs.

Syria is similarly heavily contaminated by landmines, particularly as a result of the civil war started in 2011. The Euro-Med Monitor reported that the number of civilians killed due to mine explosions between March 2011 and March 2021 is of 2,637 civilians, including 605 children and 277 women. Although all parties to the conflict used landmines in Syria and are therefore accountable to varying degrees, it is the Syrian regime itself the primary responsible, considering its military equipment, economic resources and diverse armament.

In the conference was particularly highlighted that, in most cases, mine victims are unarmed civilians, especially children, for their natural curiosity, mobility and lesser awareness of the threat, and that they must therefore be the primary beneficiaries of mine-risk education programs, also through cartoons and video-games.

“Anti-personnel landmines are the most unforgiving and perfidious of all weapons, as, once emplaced, they are indiscriminate and unpredictable in their targets and effects, unless removed or detonated” said Michela Pugliese.

Migration Researcher Pugliese spoke also on landmines’ consequences. “Starting from the most evident ones like the heavy human and material losses, the obstruction of humanitarian aid and the deprivation of livelihood sources, to the less visible consequences like the large numbers of internally displaced people unable to return to their homes, the long-term psychological effects on survivors and the general fear of the possible presence of mines nearby. Eventually, landmines obstruct post-war reconstruction efforts in the affected communities both materially and psychologically.”

This occurs particularly because, although international law has set clear rules on the prohibition of the use of anti-personnel mines and on their destruction, these are too often not implemented nor respected. Sometimes such humanitarian legal instruments are not even signed. Both Syria and Libya, for instance, have not signed neither the Mine Ban Treaty of 1997 nor the Convention on Cluster Munitions of 2008.

The Euro-Med Monitor called on all the parties involved to the conflict in both Libya and Syria to cooperate in removing all mines planted in the areas under their control, uncovering maps that show their locations and placing warning signs indicating their presence; and on all states, especially those experiencing conflicts, to sign and ratify the Mine Ban Treaty.

Migration Researcher Pugliese concluded that “until a nation-wide survey and a systematic mine clearance are completed in both Libya and Syria, the extent of mine contamination in these countries will remain unknown, as will remain unknown many vital information, such as the real numbers and the comprehensive needs of mine victims”.

All panellists in the conference advocated for a world free of anti-personnel landmines and agreed to raise the issue both locally and internationally to make step forwards in mine action and awareness, as the landmines’ epidemic is as a global - not a local- issue, affecting and injuring the whole international community, even in times of peace.