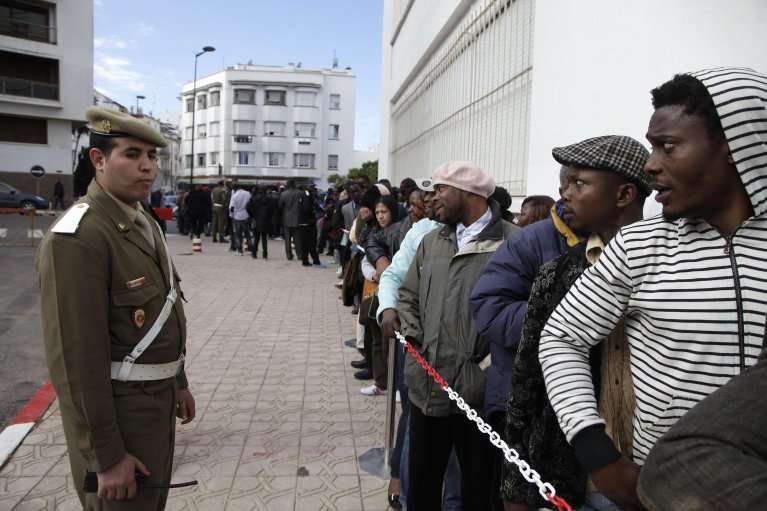 African refugees in Morocco arrested and standing in line to be deported. Source: SNN| Sahara News Network
19 May 2021 Morocco
Share On Copied
AR

The Moroccan police arrested dozens of migrants including, pregnant women and children, arriving  from Sub-Saharan Africa on May 7. They transferred them to the city of Tan-Tan in northern Morocco as part of their campaign to arrest and forcibly displace them.

The police carried out the arrests without judicial orders or oversight and released the detainees in a remote area, leaving them with no food or water.

Ibrahima (a pseudonym), one of the African immigrants who were arrested that night, told Euro-Med Monitor: “at 11 p.m., I was shocked to see the Israeli police storming my apartment without a judicial warrant or prior warning”.

“They tortured and arrested me and then took to a remote area the next day, which later turned out to be the city of Tan-Tan. This city is hundreds of kilometers away from our homes. The police left a group of detainees and me without any food or drink”.

The Moroccan police did not secure the detainees' homes after the arrests that night. Their apartments were left with open doors, allowing robbers easy access.

This is not the first time the Moroccan authorities arrested migrants in El-Ayoun. The aim of these repeated operations is to remove migrants from the border area.

The recent arrests were accompanied by a noticeable increase in the use of violence against migrants. The raids on migrants took place during the day, not just at night.

El-Ayoun city is one of the areas where immigrants from Morocco depart to the Canary Islands about 200 km away. The number of immigrants arriving to the Spanish archipelago reached about 23,023 at the end of 2020. This is eight times more than in 2019.

Omar Al-Ajlouni, a legal researcher at Euro-Med Monitor, said: “The inhuman treatment of migrants through arrests and violations  cannot be justified in any way”.

“The Moroccan authorities are obligated to implement the laws within the treaties related to the rights of migrants, especially the International Convention on the Protection of the Rights of All Migrant Workers and Members of Their Families, which the Moroccan state ratified on June 21, 1993,” he said. “Article 10 of the convention states: ‘No migrant worker or member of his or her family shall be subjected to torture or to cruel, inhuman or degrading treatment or punishment’.”

The Moroccan authorities must stop arresting and intimidating African migrants, end illegal operations aimed at deporting migrants from the border areas, work to absorb migrants, enable them to exercise their rights and integrate them into Moroccan society.