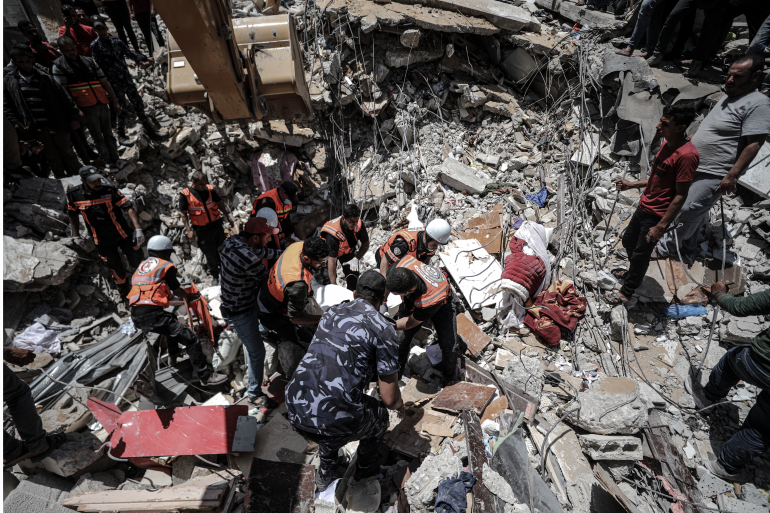 Paramedics pulling civilians from under the rubble in the Gaza Strip. Source: Anadolu Agency
May 20,2021 Israel-Palestinian Territory
Share On Copied
FR | AR

Geneva – The Israeli Army has killed and maimed many Palestinians in deliberate targeting of unprotected homes with families inside in inhumane military operations, Euro-Mediterranean Human Rights Monitor said.

Since the beginning of the current Israeli bombing blitz, the Israeli forces targeted 31 extended families: 21 homes of families were bombed and destroyed with families being inside; two civil gatherings of family members were targeted; a man and his wife were stuck inside their car, and a man and his son were targeted in agricultural land.

So far, the reported incidents have left 96 Palestinians killed, including 44 children and 28 women.

The reported attacks are part of hundreds of Israeli air raids that did not spear anything in the Gaza Strip.

According to the Palestinian Ministry of Health, since Monday, 10 May, 230 Palestinians have been killed, including 64 children and 38 women, while 1,630 have been wounded.

In addition, about 1,030 homes were completely destroyed, about 6,600 housing units and installations were partially damaged, about 530 press offices and commercial interests were destroyed, 41 were damaged and 75,000 civilians were displaced fleeing the bombing, which made the 2 million residents of the Gaza Strip prisoners of fear, panic and danger.