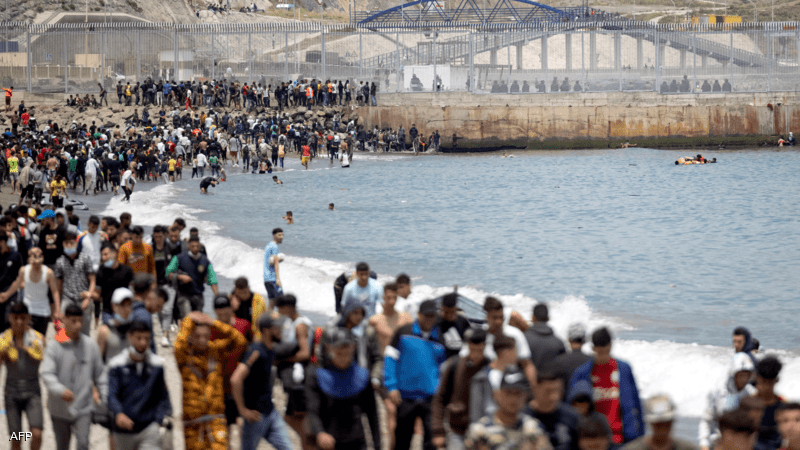 Thousands of migrants – including many families, minors, and unaccompanied children - are desperately reaching Ceuta in these past days but, while Spain deploys further soldiers with batons and tear gas at the border and EU officials send their full support to Madrid, half of the sea-soaked shivering people has already been summarily returned. Violence and collective expulsions are not the answer, warned Euro-Med Human Rights Monitor in a statement today, the Spanish government and EU should instead channel their energy towards creating safe and legal routes for migrants seeking international protection and a dignified life.

Since Monday, Spain is submerged by an unprecedented humanitarian crisis, as in less than 48 hours around 8,000 people, including 2,000 minors, reached the Spanish enclave of Ceuta, on the north African coast, either by swimming in or climbing over the 10-metre fence.

This wave of arrivals came in a moment of deepening diplomatic tension between Rabat and Madrid, over the presence in Spain of Brahim Ghali, leader of the Western Sahara independence movement Polisario Front, who has been treated for Covid-19 in a Spanish hospital in mid-April.

As Morocco eased its border controls, the reaction of Spain was clear-cut. Already on Tuesday, Ceuta’s president described the situation as an “invasion”, prime minister Sanchez arrived in the city vowing “to restore order" and interior minister Grande-Marlaska deployed its army plus 200 extra police to reinforce the 1,200 officers already patrolling the border.

Up to now, Spain expelled approximately 4,000 people, half of the sea-soaked migrants who crossed the border into the Spanish city and European soil.

The situation at the border was both violent and tragic.

Spanish soldiers and police officers physically dragged people to the border fence, chased after some with batons and fired tear gas to people on the other side to disperse and discourage them from crossing.

One young man drowned, a teenager emerged from the sea with a dozen empty plastic bottles tied to his body as a life vest, and dozens were treated for hypothermia and other injuries.

The endless line of exhausted migrants, both adults and children, was helped by Red Cross workers before being transferred to the authorities and, for many, sent back, as prime minister Sanchez stated that anyone who had entered Ceuta “irregularly” would be immediately returned.

“The EU should understand that immigration is a matter of human rights and international law, not of over-funded bilateral agreements and military defence” said Michela Pugliese, migration researcher at Euro-Med Monitor, “Every day, hundreds of people risk their lives while trying to reach Ceuta, Melilla and the European soil, often without the possibility of having an individualized assessment of their asylum request. Collective expulsions are not the answer, the sole sustainable solution to avoid humanitarian crises is to establish safe and legal channels for people seeking international protection and a dignified life”.

Euro-Med Monitor calls on Spain to ensure that all those who intend to seek asylum have access to individualized and fair asylum procedures, as enshrined inter alia in Art. 4 of Protocol No. 4 of the European Convention on Human Rights and Art. 19 of the Charter of Fundamental Rights of the EU; to guarantee that vulnerable migrants receive appropriate medical treatment and psychological support; and to respect and fulfil Art. 31 of the 1951 Refugee Convention, that recognises that, in order to seek asylum, migrants are often compelled to arrive, enter or stay in a territory irregularly.

Euro-Med Monitor calls on the EU to build legal channels for people seeking international protection and to establish mandatory quotas for distributing them equally within all EU Member States.