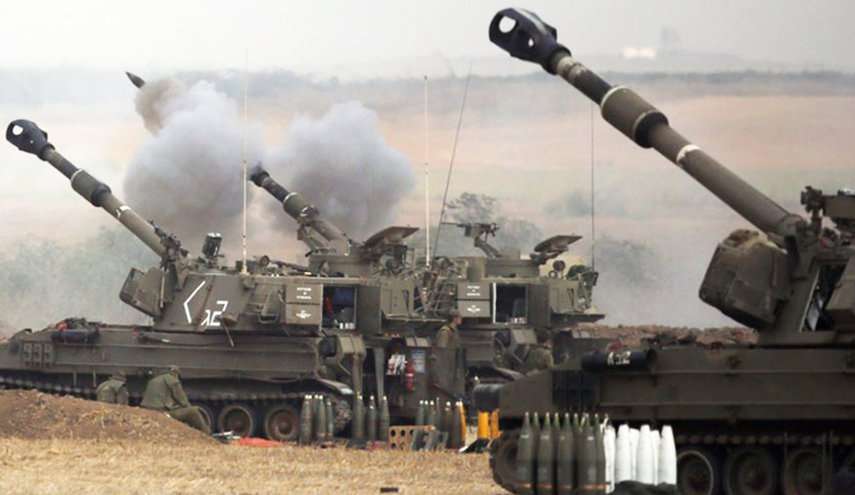 Geneva - The Euro-Mediterranean Human Rights Monitor said that the Israeli forces' indiscriminate shelling operations with their tanks, artillery, and warships towards the eastern and western Gaza Strip violates the rules of international humanitarian law and may constitute war crimes.

The Geneva-based Euro-Med Monitor confirmed in a press release on Friday that the indiscriminate bombing operations carried out during the 11-day Israeli military attack breach the international humanitarian law standards, especially regarding the principles of distinction, proportionality, and military necessity.

Euro-Med Monitor stated that its field team documented the Israeli artillery's participation in indiscriminate bombing operations since early days of the massive Israeli operation in Gaza called "The Guardian of the Walls". The operation  began on May 10, 2021 and continued until the announcement of a  ceasefire, which came into effect at2:00 am on Friday, May 21, 2021.

Euro-Med Monitor pointed out that these bombing patterns by land and sea, complemented with thousands of intense airstrikes carried out by Israeli warplanes, reduced  hundreds of homes to rubble; changed the features of many neighbourhoods and caused colossal damage to the infrastructure.

According to the latest statistics of the Ministry of Health in the Gaza Strip, the Israeli military attack on the Strip during the 11 days resulted in the deaths of 232 Palestinians, including 65 children, 39 women, and 17 older adults. It also injured about 1900 others, 60 in critical conditions and inflicted destruction and damage on about 10 thousand housing units, hundreds of economic establishments, and the infrastructure.

According to Euro-Med Monitor's follow-up, the shelling started the day after the Israeli military attack on the northern Gaza Strip. In the next two days, it focused on the Bedouin village, which caused the death of many civilians and the injury of others. As a result, thousands were displaced.

According to testimonies received by the Euro-Med Monitor, for over  4 hours on Thursday morning, May 20, 2021, Israeli artillery fired two shells every minute on the eastern areas of the Gaza Strip. Some of the shells fell several kilometres from the separation fence and caused fires and damage to homes and facilities. The bombings also repeated heavily at night until the hours of dawn, causing large explosions that left the population, especially children and women, terrified.

Euro-Med Monitor indicated that the Israeli forces use multiple ammunition in artillery bombardment, some of which are fired by tanks or artillery stationed inside the separation fence and on sea boats. Also, some of these shells have massive destructive capabilities that penetrate reinforced concrete and explode inside residential homes. Other smoke bombs produce a cloud of white smoke that has  a harmful smell and causes congestion, itchy eyes and difficulty breathing.

Euro-Med Monitor confirmed that the various artillery shells used by the Israeli forces aim to inflict harm and psychological intimidation on civilians through the loud explosions resulting from them. These attacks did not stop and mostly carried on throughout the military attack.

Euro-Med Monitor indicated that the indiscriminate bombing operations involved and resulted in several grave violations, most notably as follows:

Euro-Med Monitor documented other incidents where artillery shells fell on Palestinian homes, penetrated concrete ceilings, and caused multiple injuries, fires, and damages. This was repeated throughout the eastern regions of the Gaza Strip.

According to Euro-Med Monitor follow-up, the damage caused by the heavy use of artillery shells was not limited to direct harm but also caused severe psychological effect, especially for women and children. The Euro-Med Monitor team received testimonies about parents' suffering in dealing with their children during the intense and continuous bombings. This causes a state of great panic, tension, screaming, sleep deprivation, insomnia, and other adverse effects.

Destruction of civilian objects and installations:

As a result of the Israeli artillery shelling, several shells fell on factories and facilities, including nine factories and companies operating in the industrial zone east of Gaza City, which led to extensive damage and destruction. This level of targeting constitutes a flagrant violation of the area's protection according to the related international agreements.

The Israeli artillery shelling on the evening of Thursday, May 20, caused the total or partial destruction of 13 factories in the industrial zone, including the Siskik factory, CocaCola factory, Dalloul factory, and other factories for wood and cleaning materials. Plastic and wood products increased the flames caused by the shelling, which complicated efforts to extinguish them, and it lasted for hours to end.

Euro-Med Monitor also documented the targeting of the Abu Iskandar factory, which manufactures plastics, the artillery shells  caused fires inside it to catch tons of products and plastic raw materials at dawn on Tuesday, May 18.

On Monday, May 17, Israeli artillery targeted the Fomco sponge factory, east of Jabalia, which led to a massive fire in the factory and destroyed extensive facilities.

On the evening of Thursday, May 20, artillery shelling set fire to several factories in the industrial zone of eastern Gaza.

Thousands were forced to flee their homes in the eastern Gaza Strip due to the violent and continuous artillery shelling and its harmful odours. The displacement began on May 13, 2021, with about 10 thousand citizens expulsion as the fierce bombing began of the Bedouin village in the north of the Strip. The pace of displacement escalated with the intensification of the bombing in all the eastern regions of the Strip. The displacement reached its climax on May 15, which coincided with the 73rd anniversary of the Palestinian catastrophe. Later, the number of forcibly displaced people increased to more than 80 thousand. Nearly 50 thousand were in shelters (UNRWA schools) where they live in challenging conditions and without adequate support.

Given the data, Euro-Med Monitor emphasized that the Israeli forces' use of highly destructive and inaccurate missiles in densely populated and indiscriminate areas violates the principle of distinction that obliges the fighting troops to distinguish between civilians and combatants, which extends to include civilian objects. The Israeli authorities are obliged to avoid targeting civilians, factories and homes without any military necessity.

Euro-Med Monitor stressed that the Israeli forces' indiscriminate use of artillery shells against the densely populated Palestinian population amount to war crimes. Euro-Med calls for the International Criminal Court to include these violations in its investigation into war crimes committed in the occupied Palestinian territories.

Euro-Med Monitor called on the international community to take urgent action to ensure accountability for Israel, justice for the  Palestinian victims, and  provide permanent mechanisms to protect Palestinian civilians from the devastating Israeli war machine.

Euro-Med Monitor called for an immediate lifting of the Israeli blockade on the Gaza Strip and swift work to rebuild homes, facilities and infrastructure destroyed by the Israeli attack.