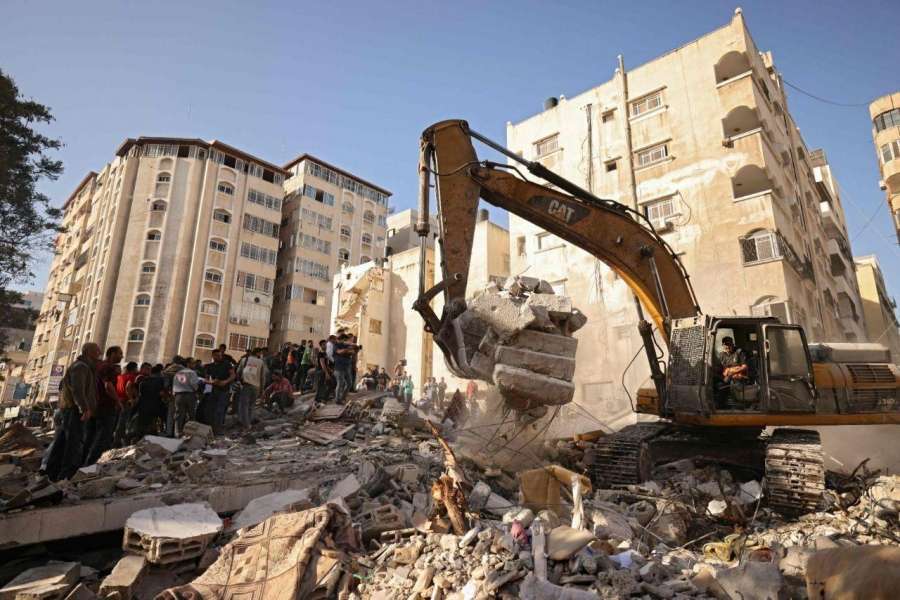 Geneva – The Israeli forces have destroyed many residential buildings inhabited by families in a neighbourhood in Gaza city, which left 33 dead and 50 injured, according to initial reports, Euro-Mediterranean Human Rights Monitor said in a statement.

The brutal, large-scale destruction comes on the seventh day of the Israeli attack, called Operation Guardians of the Walls, on the Gaza Strip.

The Israeli warplanes fired  a large number of missiles at a residential neighbourhood, consisting of five buildings containing many apartments, in Al-Wehda Street without prior warning. At the same time, the Israeli forces intensely bombed the streets and crossroads surrounding the area leaving it with almost unprecedented damage.

The damage made to the infrastructure made it difficult for  ambulance crews and civil defence teams to reach the site and recover victims and survivors from underneath the rubble.

Some of those rescued from under the rubble survived the attack, but 33 dead bodies were recovered, including 12 women and eight children. In addition, 50 others were injured, most of them children and women. Most of the victims are from three families.

As a result of this current attack, several families were completely obliterated or lost many of their members.

Following these raids, the Israeli army announced that it had targeted more than 90 targets of Hamas and Islamic Jihad in the Gaza Strip. However, the resulted casualties refute these allegations and indicate that civilians and their properties have become targets for the Israeli forces.

According to the Palestinian Ministry of Health, since last Monday, 10 May, 187 people have been killed, including 52 children and 31 women, while 1,225 have been wounded. The number is expected to rise  as search and rescue operations continue.

In flagrant violation of the rules of international humanitarian law, which guarantee the protection of health and medical facilities, Israeli drones bombed the Shuhada al-Daraj heath centre  with two missiles, causing severe damage to the centre, and bringing it to a halt.

In addition, the Israeli forces directly targeted the main streets and roads in Gaza to destroy the infrastructure.

Despite the ongoing difficulties, Euro-Med Monitor teams continue to document the developments on the ground and the ongoing crimes committed by the Israeli forces. These violation amount to war crimes and crimes against humanity.

Israel has reused the same strategy it used in the previous attacks: deliberately targeting civilian homes and wiping out residential neighbourhoods, without any regard for the rules of international humanitarian law. Israel has been able to proceed with its violations by taking advantage of the global system's inability to hold it accountable and enjoying an open balance of impunity.

Article 25 of the Hague Regulations concerning the Laws and Customs of War on Land profits states “The attack or bombardment, by whatever means, of towns, villages, dwellings, or buildings which are undefended”. Article 53 of the Fourth Geneva Convention stipulates that “Any destruction by the Occupying Power of real or personal property […] is prohibited, except where such destruction is rendered absolutely necessary by military operations”.

Destruction of property for no clear military justifications is a grave breach of Article 147 of the Fourth Geneva Convention and a war crime under the Statute of the International Criminal Court Article 8 (2) (b) (2).

The international community's silence, including the indecisive and negatively idle position of the EU and its member states towards the ICC investigation into war crimes in the occupied territories, have contributed to Israel's escalation of violations against Palestinian rights without deterrence.

All those concerned must act decisively to stop the violent and disproportionate Israeli attacks on the Gaza Strip and make every effort to end the military operations, which is claiming more civilian lives every hour.

ICC must monitor the ongoing Israeli violations in the Gaza Strip and include them in their current investigation into previous violations and hold the Israeli leaders and soldiers accountable.