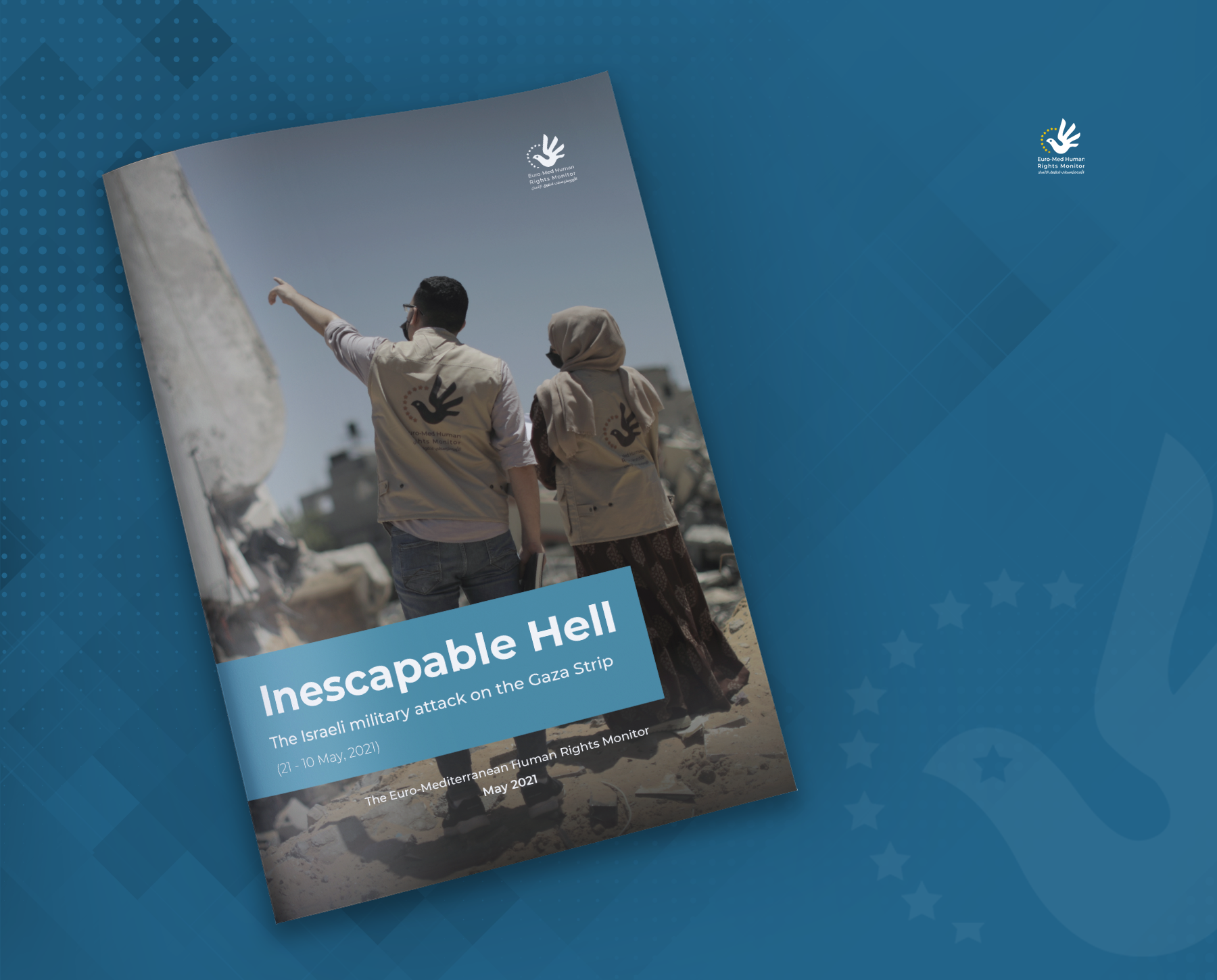 Geneva – A new report documenting several violations of international humanitarian law committed by Israel during its recent military attack on the Gaza Strip from 10 – 21 May was released today by the Euro-Mediterranean Human Rights Monitor. The report concluded that the International Criminal Court (ICC) must hold the Israeli leaders and soldiers accountable and not allow them to enjoy impunity.

Titled “inescapable hell”, the report examined the Israeli army’s violations during its recent military attack on the blockaded Gaza Strip.

The report was based on field research and documentation by Euro-Med Monitor’s team during and in the aftermath of the military attack, where dozens of field interviews and serious violations were documented.

Statistics support the report, which presents day-by-day documentation of the Israeli attack, including violations such as mass killings and premeditated killings by deliberately targeting citizen gatherings and vehicles.

Over the 11 days of the attack, the Israeli air, land, and sea forces carried out a massive military attack on the Gaza Strip, the fourth since 2008. They dropped tons of high-explosive bombs, leaving hundreds dead and wounded.

The attack caused massive destruction to the infrastructure, civilian objects, and homes, many of which were bombed with residents inside. Many families were wiped out altogether.

The Israeli forces called their military operation "Guardian of the Walls," while the Palestinian factions called their missile attacks during the same period "Sword of Jerusalem".

According to the Palestinian Ministry of Health, the attacks killed 254 Palestinians, including 66 children, 39 women and 17 elderly, and injured 1,948 others. (The number of wounded reached 2,212, according to Euro-Med Monitor’s field count)

The Israeli air raids also destroyed or damaged power, communications, and Internet networks as well as many other economic facilities.

The report highlighted the worsening humanitarian situation because of the Israeli military attack, and the mass displacement of about 120,000 Palestinians from their homes within the Gaza Strip. In addition to the collective punishment, it contained on the Strip's population of more than two million people.

Israel has committed grave violations of the rules of international humanitarian law, including the principles of distinction, proportionality, military necessity, and special protection in armed conflicts.

Various weapons and ammunition and disproportionate destructive force have been used against Gaza residents and their properties. These violate the laws related to protecting civilians and their property during times of war, provided by the international humanitarian law, including the Fourth Geneva Convention of 1949, which relates to the protection of civilians in wartime.

The Israeli forces fired rockets and shells containing thousands of kilograms of explosives in indiscriminate or sometimes planned attacks, without regard to the safety of civilians in the Gaza Strip, which is one of the most densely populated places in the world.

The legal conclusions of the attacks and their consequences and effects confirm that what Israel did may amount to war crimes and crimes against humanity. This was exemplified by the bombing of houses whilst their inhabitants were still inside and the indiscriminate bombing.

“ICC should include these practices in its investigations it finally decided to conduct into previous violations, work seriously to hold Israeli leaders and soldiers accountable and not allow them to escape punishment,” Euro-Med Monitor said.

The organization also called on the European Union to activate all tools of pressure on Israel to stop its continuous violations. “The international community must shoulder its moral and legal responsibilities to achieve accountability, fairness and ensure that Israel is held accountable for its crimes and that the Palestinians obtain protection and justice.”

Action is needed to end the blockade of Gaza and the ongoing collective punishment of Palestinians in Gaza and ensure the facilitation of reconstruction and adequate funding for it  while securing urgent support to help families facing difficulties after the attack.

To view the full report in Arabic, please click here