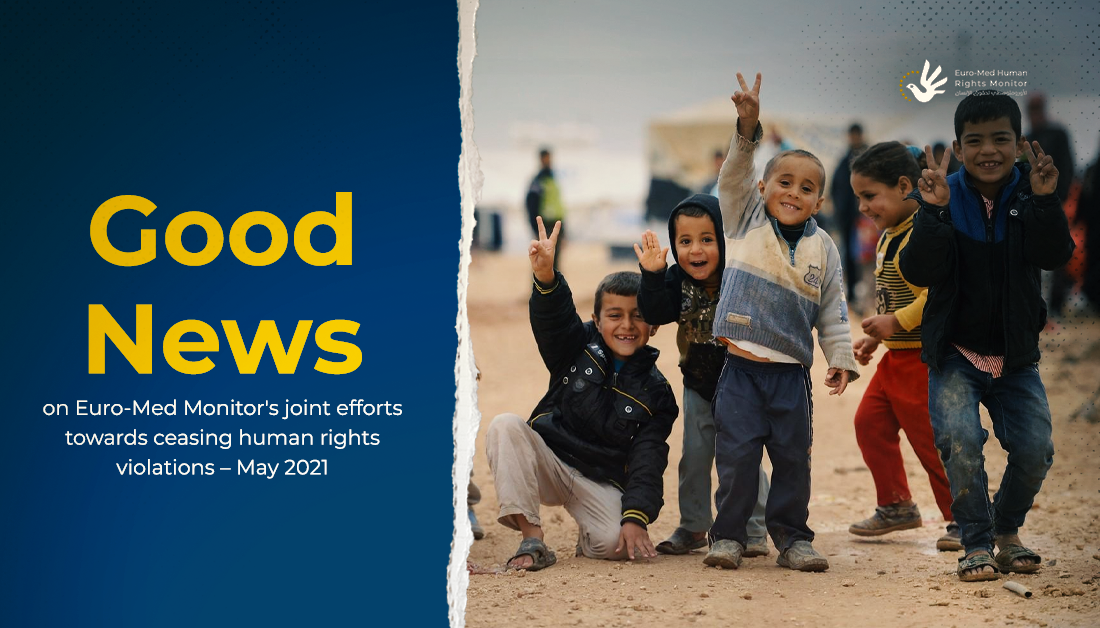 May 2021 witnessed serious human rights violations on a large scale in the region, especially in the occupied Palestinian territories. In the Gaza Strip, Israel launched a violent military attack that killed more than 200 people. And a new refugee crisis exploded when thousands of asylum seekers flocked from Morocco to Ceuta, Spain. In return, those refugees were faced with unjustified repression and pushbacks. In Iraq, the security forces continued their violent practices against peaceful protestors, including the use of excessive force.

Nevertheless, despite the continuing large-scale violations in the Middle East and North Africa (MENA), it is important to recognize the small steps that – in the long term – will bring considerable improvements towards ending the violations and redress of the victims.

During May, our team worked alongside partner organizations to bring about real change to cease violations and attacks on fundamental freedoms in both the MENA region and Europe. Now, to our delight we can deliver  some great news to you about those achievements.

On May 27, the United Nations Human Rights Council adopted a resolution establishing a commission of inquiry into human rights violations in the Palestinian territories following the recent Israeli military attack on the Gaza Strip. Although nine Member States abstained from voting in favor of the resolution, it is a positive step towards justice for victims.

As soon as the Israeli military began their attack on Gaza, Euro-Med Monitor’s field teams worked to document the violations that accompanied it. The organization corresponded with multiple parties to investigate mass killings, targeting civilian objects, and other serious violations committed during the 11 days of the attack.

Euro-Med Monitor, in cooperation with other human rights organizations, has repeatedly addressed the Iraqi authorities during the past two years, urging  them to stop their violations against peaceful demonstrators, and to open an independent, transparent investigation into all incidents.

On May 28, the Bosnian authorities decided to transfer about 250 migrants living in informal settlements such as abandoned buildings to Leba, an official refugee camp. This step came to improve the lives of these refugees and resettle them in places suitable for living.

At the end of December 2020, Euro-Med Monitor addressed the Bosnian government after a fire broke out in a refugee camp, urging it to improve the conditions of refugees on Bosnian soil and open new shelters for them. The organization also addressed members of the European Union and relevant UN organizations to support refugees in Bosnia amid the harsh conditions experienced by thousands of asylum seekers and migrants northwest of the country.

On May 27, the Greek Ministry of Citizens Protection said the number of migrants living in refugee reception camps on the Greek islands in eastern Aegean decreased. The ministry said that about 9,000 migrants currently live on these islands, compared to 40,000 last year.

During the past months, the Greek authorities have been transferring thousands of migrants, including pregnant women, the elderly, sick and children, to mainland areas to grant them asylum.

In a lobbying and advocacy campaign that spanned over the past years, Euro-Med Monitor, together with partner organizations concerned with refugee rights, highlighted the risks surrounding migrants and asylum seekers in refugee reception camps on the Greek islands, especially after the spread of the Coronavirus pandemic. The organization corresponded with the Greek authorities and relevant UN organizations to improve the lives of refugees and ensure their access to a decent life in places that preserve human dignity.

Spain's Minister of Social Rights announced on May 25 that some 200 minor asylum-seekers who arrived in Ceuta in mid-May have transferred to mainland Spain to facilitate reuniting them with their parents and provide care for them.

On May 21, the Euro-Med addressed the Spanish authorities and the European Union to stop the violence, mass expulsions and forced pushbacks against asylum seekers arriving in Ceuta. The organization called for the rights of refugees to be respected and ensure their access to individual and fair asylum procedures, as stipulated in the European Convention on Human Rights.