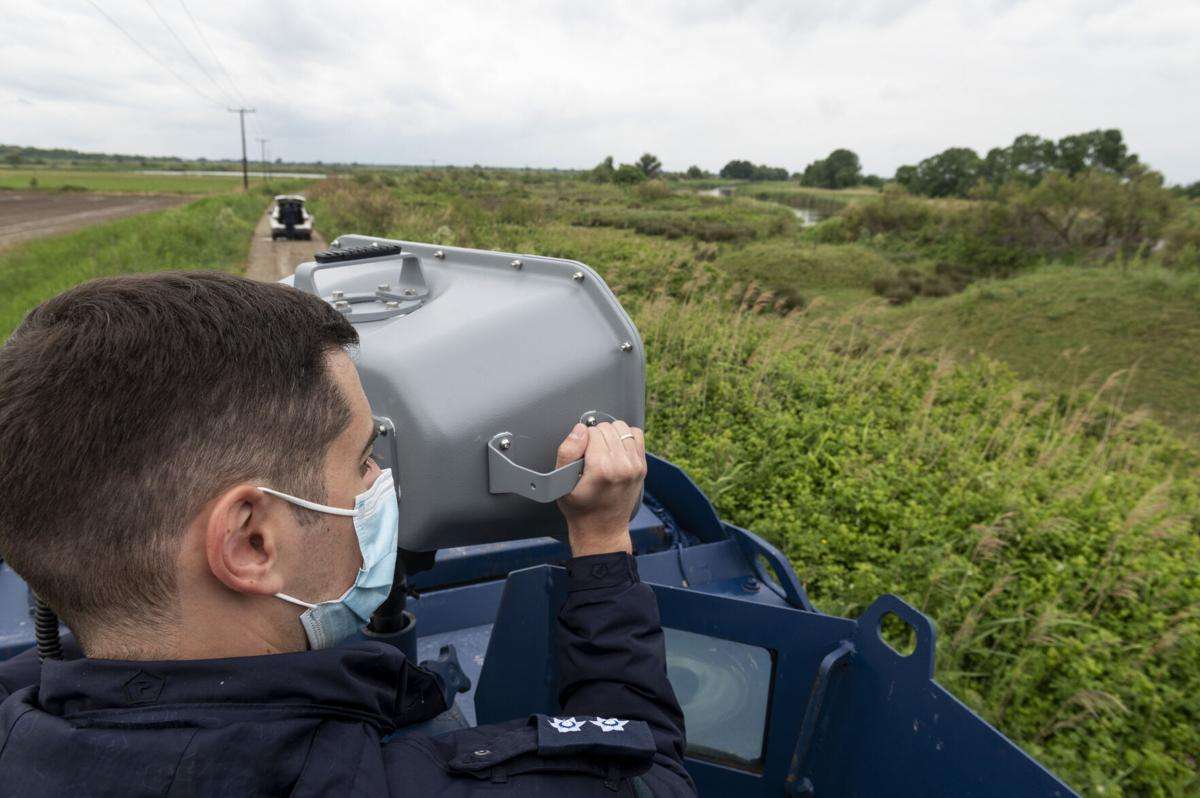 A Greek police officer operates a long range acoustic device (LRAD), attached on a police vehicle, during a patrol alongside the Greek-Turkish border near the Greek town of Feres on May 21, 2021 | Photo: AP
03-Jun-2021 Greece
Share On Copied
FR | AR

Dangerous, experimental and discriminatory digital technology is being funded by the EU and employed in Greece to detect asylum seekers early, deter them from crossing and illegally turn the EU into a “digital fortress” that inhumanely keep people on the move afraid and away, warned Euro-Med Human Rights Monitor on Thursday, the removal of migrants without giving them the opportunity to apply for asylum is illegal under both European and international law.

In yet another attempt to prevent migrants from crossing the Greece-Turkey border, Greek police has started to fire long-range acoustic devices, or “sound cannons”, from an armoured truck over the frontier towards people trying to reach the EU. Despite their small size, these high-pitched devices can match the volume of a jet engine and their powerful sound waves can cause significant pain and shock to the human body, causing exposed people suffering that go from serious health problems and severe pain to deafness.

These dangerous “sound cannons” are part of a vast battery of experimental and new digital barriers that are increasingly funded by the EU and employed in several Member States to stop or push back migrants trying to reach the European soil. Part of this “digital fortress” are also palm scanners that record the unique vein pattern of a person’s hand and live camera reconstruction technology that can erase foliage virtually, exposing people on the move hiding in woods near border areas.

This strategy has been defined by European MEP Patrick Breyer as a “testing field for technologies that are later used on Europeans as well”. Indeed, the long-range acoustic devices’ system can be employed also as a method of crowd control in riots and protests, and its strong sound waves can be used to deter and harm wildlife in strategic places like airport runways, gas and oil platforms, and industrial and energy plants.

As yet another element of this fortress, a metal wall has been built along the Evros River separating Greece from Turkey to block the most commonly-used crossing points, with river and land patrols as well as new observation towers fitted with long-range cameras, searchlights, night vision and multiple sensors.

This aggressive migration strategy is not brand new. The European external borders’ securitization and digitization has been increasing steadily since the so-called refugee crisis of 2015. Since then, the EU has poured 3 billion euros into security technology.

In addition, over the past five years, EU officials have signed several deals with third countries in the Mediterranean to hold migrants back even in reportedly inhuman and degrading conditions and have transformed the EU Border Agency, Frontex, into a powerful and controversial security force involved in illegal operations violating human rights.

Armed with this wide variety of tools, European authorities are increasingly stretching outside their borders and their legal standards in order to control migration and stop mobility.

“Our task is to prevent migrants from entering the country illegally. We need modern equipment and tools to do that” said Greek Police Major Dimonsthenis Kamargios, head of the region’s border guard authority. Yet the removal of migrants without giving them the opportunity to apply for asylum is illegal under both European and international law, as states are obliged to process asylum requests whether or not migrants entered the country legally.

“High-risk technologies are the new weapons employed by EU governments to pretend that they are resolute, efficient and strong in their control of borders and management of migration flows, while profiting from yet another violation of migrants’ legitimate right to seek asylum, that leads to nothing more than useless pain” said Michela Pugliese, Migration and Asylum Researcher at Euro-Med Monitor, “EU funds are poured into disturbing experimental technologies that criminalize migrants as thieves and hunt them as animals at the borders, rather than into beneficial realities fostering safe and legal routes, fair asylum processes and integration”.

Euro-Med Monitor calls on Greece and Europe to immediately adopt and strengthen human rights-based equality and non-discrimination approaches to the use of digital border technologies, including human rights impact assessments as a prerequisite for their deployment, in line with international standards; to ensure people’s right to seek asylum, as enshrined inter alia in Art.18 of the EU Charter of Fundamental Rights; to respect Art.19 of the EU Charter prohibiting collective expulsions; and to fulfil the prohibition of torture and inhuman or degrading treatment or punishment, as enshrined in Art.4 of the EU Charter.