Euro-Med Monitor condemns Israel's arrest of reporter, calls for an end to violations against Palestinian journalists 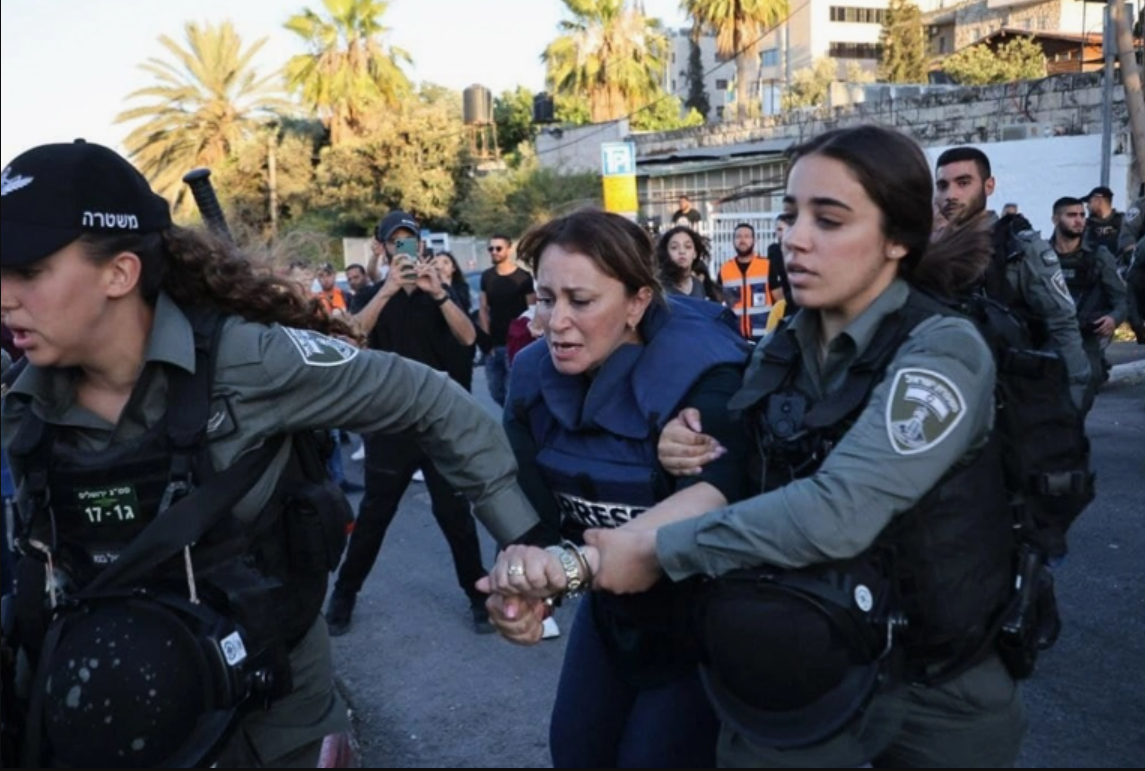 Guevara al-Budairi was covering the demonstrations of solidarity with the Sheikh Jarrah neighborhood when she was detained (Photo: Aljazeera)
05 Jun 2021 Israel-Palestinian Territory
Share On Copied
FR | AR

Geneva - The Euro-Mediterranean Human Rights Monitor condemned the Israeli police’s arrest of Palestinian journalist Guevara Al-Budairi, an Al-Jazeera correspondent in the Palestinian territory, and called for her immediate release.

In a press release, Euro-Med Monitor deplored the violent behaviour of the Israeli police towards the journalist during her coverage of confrontations in the Sheikh Jarrah neighbourhood in occupied East Jerusalem and the destruction of a camera used by the Al-Jazeera crew.

Al-Budairi was covering the demonstrations of solidarity with the Sheikh Jarrah neighbourhood on the 54th anniversary of the Naksa day when Israel occupied the West Bank, East Jerusalem, the Gaza Strip, Golan, and Sinai.

Eyewitnesses told a Euro-Med Monitor field team that journalist Al-Budairi was detained in an Israeli police station on Salah El-Din Street in Jerusalem after being handcuffed and violently pushed.

They added that the police asked the reporter for her identity card, and she told them it was in the car, but as she went to retrieve it, they did not allow her to go, quickly handcuffed her and took her to the police car.

Euro-Med Monitor is concerned over Israel’s systematic targeting of media crews in the Palestinian territory, especially after the recent destruction of residential buildings in Gaza, which housed dozens of media offices. The al-Jalaa residential tower was amongst the targets and included Al-Jazeera’s main headquarters in the Gaza Strip on May 15.

Three days ago, the Israeli police had released two Palestinian journalists from Jerusalem, Wahbi Makkiya and Zina Halawani. Their conditional release required serving house arrest for five days, deportation from the Sheikh Jarrah neighbourhood for a month and paying a fine of about 600 dollars.

Journalists Zeina Al-Halawani and her colleague Wahbi Makkiya were detained on May 28 while covering the events of Sheikh Jarrah. During their arrest, they were beaten and left to suffer from various bruises.

At the time, the attack by the Israeli police caused journalist Wahbi Makkiya’s head to bleed whilst his colleague Zeina Al-Halawani sustained multiple injuries and a broken camera.

On May 21, the Israeli judiciary extended the administrative detention of the Al-Ghad TV cameraman, Hazem Nasser, for 11 days. The journalist was arrested on May 12 after passing an Israeli checkpoint at the entrance of Tulkarm in the West Bank after his return from covering clashes between the Israeli army and Palestinian youths.

The Euro-Mediterranean Human Rights Monitor said that the Israeli authorities' targeting of Palestinian journalists while performing their work is a systematic policy and shameful behaviour amidst the absence of international accountability measures to deter these violations. According to Reporters Without Borders, the Israeli authorities detained at least 13 Palestinian journalists, most of whom serve administrative detention.

Euro-Med Monitor called on the Israeli authorities to immediately release Al-Budairi and all other detained journalists. Euro-Med also urged the Israeli government to stop attacking Palestinian journalists and obstructing their work.

The human rights group warned that the continuation of such violations against journalists violates fundamental rights enshrined in the Universal Declaration of Human Rights and the International Covenant on Civil and Political Rights. Administrative detention is also a significant violation under the Fourth Geneva Convention, which gave journalists the right to cover armed conflicts. These laws consider journalists as civilians who must not be attacked or targeted if they are not participating in the hostilities.

Euro-Med Monitor warned that the Israeli authorities would be subject to legal accountability before the United Nations and its bodies if they continued their aggressive policy towards journalists. The Appeals Chamber of the International Criminal Court recognized that journalists carrying out missions in war zones serve the public interest by drawing the international community’s attention to violations in armed conflicts and provide facts. The international community is required to protect and secure journalists and impose international sanctions on violators of their safety.

The Euro-Mediterranean Human Rights Monitor stressed that journalists in the Palestinian territories are only performing their work and should not be treated by the Israeli authorities as perpetrators. And finally, Euro-Med Monitor calls for serious action by the United Nations relevant international organizations to stop Israel's violations.