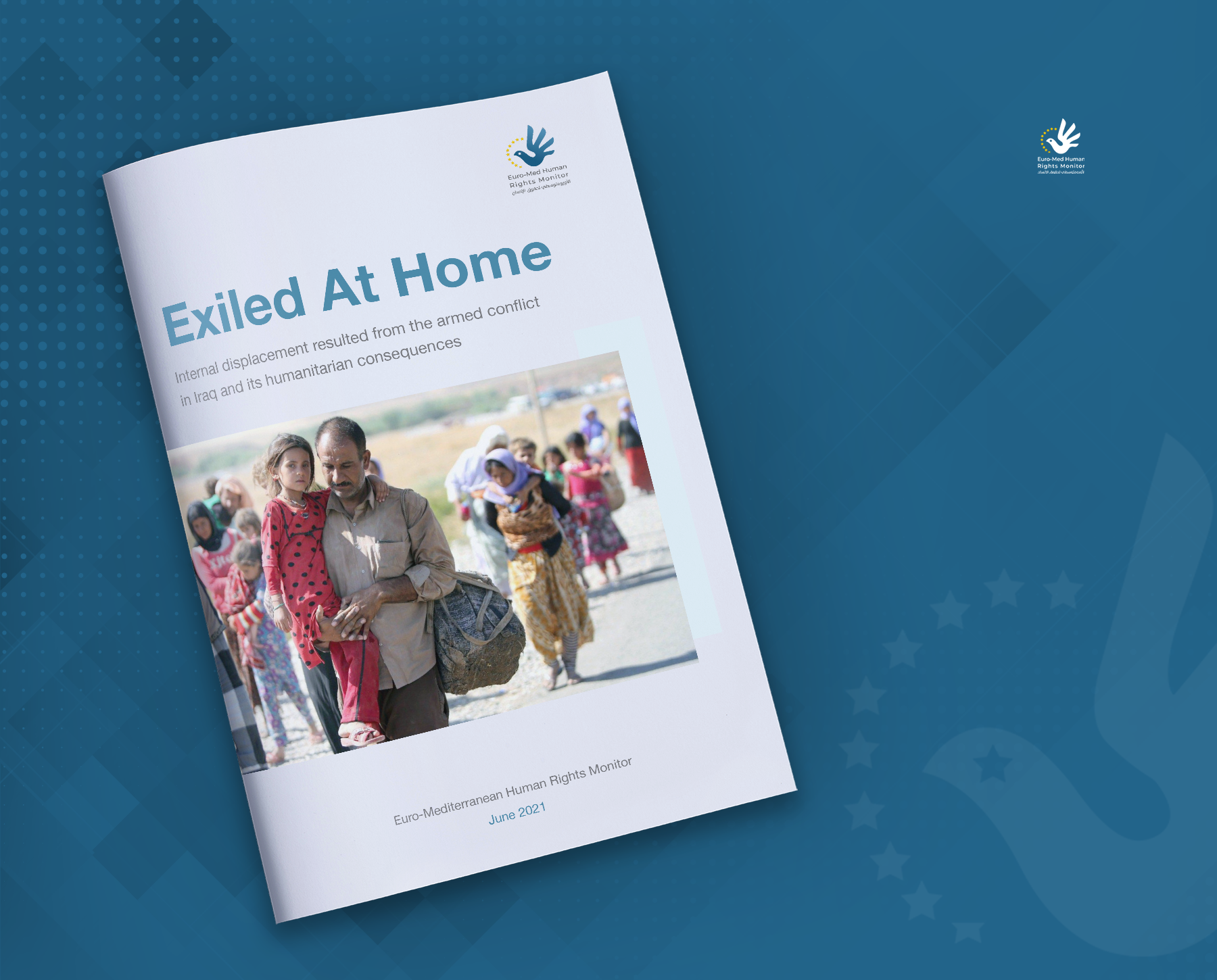 Entitled “Exiled at Home”, the report documents the conditions of the internally displaced Iraqis on a humanitarian level. In addition to the fact that many of them cannot return to their homes, IDPs in Iraq suffer an acute shortage of food and healthy water and other problems related to health and education.

The report consists of months of research and documentation carried out by Euro-Med Monitor’s team in Iraq from August 2020 to April 2021. Based on 20 interviews with IDPs, camp managers and eyewitnesses, the report reviews the living conditions of IDPs in both official displacement camps, many of them were closed, and the living conditions of those scattered in slums.

The report indicated that from the end of 2017 to the end of 2019, the Iraqi authorities closed many displacement camps and merged others so the displaced could return. This contributed to the return of about 4,867,050 displaced people. Meanwhile, the number of those who continued to move reached around  1,198,940 until today.

Omar Al-Ajlouni, a legal researcher for Euro-Med Monitor, said that “not all of the return operations were voluntary; early forced returns were reported. Many of the displaced persons upon their return were unable to live in their homes for multiple reasons, such as severe damages from battles, or because the government did not rebuild it, or the slow pace of reconstruction”.

The report pointed out that the Iraqi authorities closed the displacement camps in all Iraqi governorates, except for Anbar Governorate and Iraqi Kurdistan, which contained thousands of displaced families across the two regions, living and humanitarian conditions.

The report listed several reasons why those IDPs are unable to return to their areas: 1) the massive destruction of their houses, lands, and properties; 2) the risks related to the security conditions in the areas and governorates of the original displaced; 3) and not allowing the displaced families of ISIS members to return to their areas of origin.

By monitoring the health status of the displaced, it was discovered that they suffer from significant problems, such as shortage of medicines for chronic and common diseases.

There is also a severe shortage of medicines for skin diseases and a scarcity of medical devices such as laboratory devices.

In his testimony to Euro-Med Monitor, A.S. said: “I usually go to the camp clinic to get treatment, but most existing medicines are expired. I must go to a private doctor to treat my daughter, who has fever and diarrhea. She has been vomiting for seven days, but I cannot go to the doctor because there is no money. I don't know what to do or where to go.”

The report pointed out that the displaced face a real crisis  in terms of food security, water, education, electric power, availability of fuel, and waste removal. Together, these problems have caused the deterioration of the humanitarian situation of the displaced.

The Coronavirus pandemic has also contributed to the worsening of the situation, especially at the health and economic levels, the report said.

The international community should support the existing camps, especially regarding food security and health care and carry out its duties in supporting and accelerating reconstruction efforts and stimulating efforts that  value social cohesion and the rule of law.