Egypt Military Crackdown: Bodies pile up as escalation continues amid the slaughter 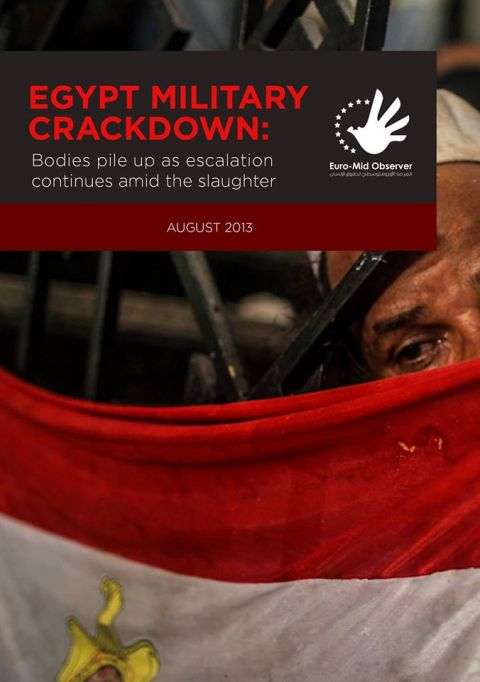 The Euro-Mediterranean Human Rights Monitor has documented the killing of at least 1215 protesters across Egypt, of which 914 protesters killed in Cairo, after Egyptian Armed Forces moved in to clear the two sit-ins of Pro-Morsi supporters on Wednesday 14 August.

Among the victims are children, women and elderly. Our team in Egypt also estimates that there are at least 8000 injured, and approximately 1,500 persons are missing until Saturday 18 August 2013.

Many of the at least 914 protesters were killed on August 14 over a period of several hours during clashes with Egypt's riot police and plain clothed men at and near the Pro-Morsi's sit-ins at Rabaa al-Adawiyya and Al-Nahda in eastern Cairo.

Prior to the 14 August clashes, the EuroMid Observer for Human Rights visited the two main protest sites, both of which were densely populated with women, children, and men who have been staging a 47 days-long sit-in to protest the removal of President Mohammed Morsi. Both sit-ins would at certain moments have a gathering of at least 150,000 people. On July 31, the Egyptian cabinet authorized the interior minister to "take all necessary measures to face these dangers and put an end to them within the framework of the constitution and the law."

On 14 and 15 August, Euro-Med Monitor researchers were present at the two Pro-Morsi's sit-ins at Rabaa al-Adawiyya and Al-Nahda. Our team interviewed thirty-seven witnesses to the violence at both sit-ins and reviewed extensive video footage of the events. One of our researchers was at the Rabaa Field Hospital. Our researchers visited numerous hospitals and field hospitals in Cairo, as well as the city's Zeinhum morgue and the Iman mosque temporarily housing dozens of the dead. They documented scores of deaths, and eyewitness reports from medical staff who described how many of the injured and dead had sustained bullet wounds to the upper body.