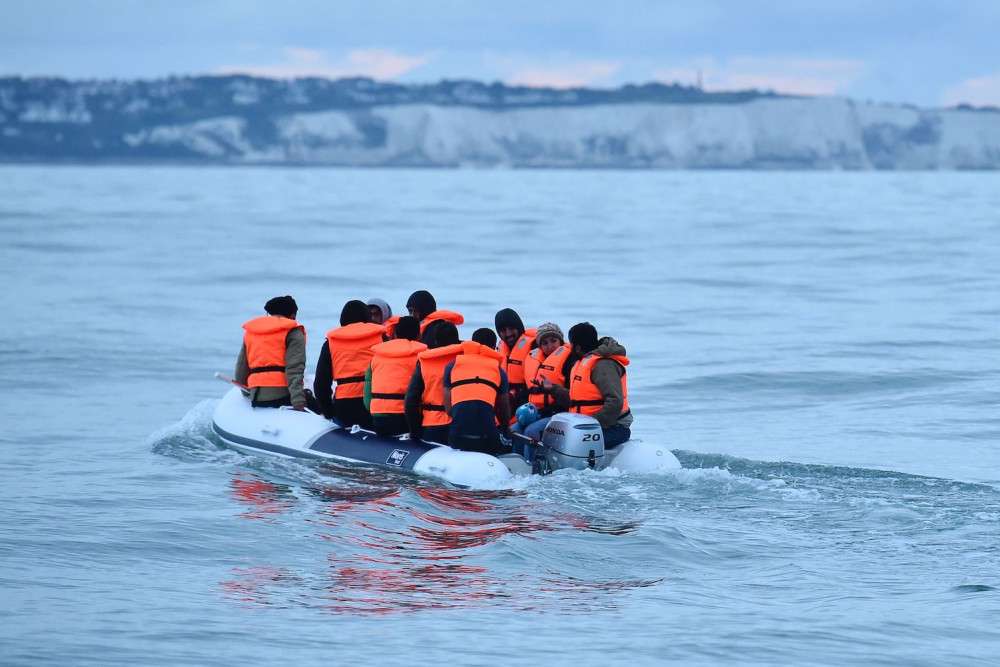 Migrants in a dinghy navigate in the English Channel toward the south coast of England after crossing from France, on Sept. 1, 2020. GLYN KIRK/AFP VIA GETTY IMAGES
11 Jul 2021 Europe
Share On Copied
FR | AR

The UK is stepping up its long list of draconian and inhuman measures aimed at curbing small boats’ crossing in the English Channel, the Euro-Mediterranean Human Rights Monitor said in a statement today. We strongly condemn the latest proposal of sentencing asylum seekers to up to four years in prison only due to their forced method of arrival. Such policies are aimed at creating a differential treatment with less rights and less guarantees for people seeking a safe refuge through desperate means.

Last Tuesday, the British government introduced in parliament its new Nationality and Borders Bill, described by the Home Office as containing “the most radical changes to the broken asylum system in decades”.

The fresh legislation intends to make it a criminal offense for asylum seekers to knowingly enter Britain without permission, with the maximum sentence for them rising from six months’ imprisonment to four years, and for people smugglers from the current maximum of 14 years up to life behind bars.

The changes brought about in the bill are set to create a differential treatment depending on whether a migrant entered the UK via a regular or irregular route, no longer granting the same rights and possibilities to people who have no choice but to enter the country irregularly.

“For the first time, whether people enter the UK legally or illegally will have an impact on how their asylum claim progresses, and on their status in the UK if that claim is successful” stated UK Home Secretary Priti Patel. She promised that those who used illegal means to reach the UK would risk having their asylum claims dismissed as “inadmissible”.

The Nationality and Borders Bill is just the latest measure of the Home Secretary’s vow to tackle “illegal migration head-on” and to “fix the UK broken asylum system”.

Toughening immigration rules was a core manifesto pledge of the ruling Conservative party in the last elections and, over the past year, it has been undoubtedly put into practice and translated into a large number of draconian measures to stop the influx of migrants crossing the English Channel in small boats.

One measure employed by the current UK government is to criminalize asylum seekers. For instance, giving to border authorities more scope to make arrests, proposing to carry out “boomerang deportations” that could be enacted in “as little as 24-hours” and jailing asylum seekers for steering the dinghies across the English Channel even if they have been forced to do so by smugglers and they are not part of criminal gangs.

Another action is to make it harder to physically reach the UK. In November, the British government signed a deal with France to render the Channel route “unviable”. They doubled the number of French police patrolling the coastline, increased border security at ports and reinforced the digital barriers with new drones, radars, cameras and optronic binoculars to detect migrants and stop them from crossing into the UK.

Previously, between August and September, it tried several times to put in practice in the Channel a blockade strategy similar to the Australian controversial “turn back the boats” tactic to physically prevent migrants’ fragile dinghies from entering UK waters.

Last August, Home Secretary Patel appointed a Clandestine Channel Threat Commander with the primary responsibility of making the route impossible for small boat crossings, including through stronger enforcement measures, interceptions at sea and the direct return of boats. The methods proposed include the use of fishing nets to block the propellers and immobilize the boats, the installation of barricades in certain areas of the Channel and the possibility of linking small boats together to form a physical barrier.

More recently, the British government proposed to transfer asylum seekers abroad in offshore centers to have their asylum claims dealt with outside the UK. It has been also discussing with Denmark, which passed a similar law earlier this month, to create a sharing processing center outside the EU, possibly in Rwanda.

Another measure employed is to exacerbate immigration rules as a deterrent. Home Secretary announced that the asylum system will make “much harder for people to be granted refugee status based on unsubstantiated claims”. Already by the end of last year, British ministers changed immigration rules to prevent people from claiming asylum in the UK if they have previously travelled through or have a connection to a “safe” third country, so that since 1 January 2021 these asylum claims are treated as inadmissible.

UK is also planning to reform the age assessments of newly arrived asylum seekers to stop young adults pretending to be minors. The rigorous new assessments could be carried out by immigration officials instead than social workers and include new “scientific methods” like the use of bone scanners to determine age. It will be also lowered the current requirement to treat claimants as adults if they appear to be over 25, to “over 18”.

Meanwhile, the asylum system in the UK has become increasingly inefficient, dysfunctional and marked by chronic delays, with the number of asylum seekers for more than a year for an initial decision increased almost tenfold in the past decade, from 3,588 people in 2010 to 33,016 in 2020. Hundreds among them have been waiting for over five years in a limbo of uncertainty, terrible for both their physical and mental health.

“The blind and persistent focus of the UK government to simply shut down the borders and toughen immigration rules just puts people seeking protection at even greater risk of human rights’ abuses. You cannot deal with migration by stopping the boats with fishing nets” said Michela Pugliese, Legal Researcher at Euro-Med Monitor, “There is no such thing as an illegal asylum seeker. Thousands of people risking their life across the Channel who would previously be recognized as refugees and granted protection in the UK, under the new rules could be turned away and put in jail just because of their mode of arrival, which is the only one really available at the moment”.

Euro-Med Monitor calls on the UK to halt the criminalization of irregular entry of migrants and respect Article 31 of the 1951 Refugee Convention, that recognises that in exercising the right to seek asylum, refugees are often compelled to arrive in a territory without authorisation and provides that they should not be penalised for this; and to introduce legal mechanisms for people to seek asylum safely instead of imposing greater restrictions and harsher punishments that would only force them to take new and more dangerous routes to reach the UK.