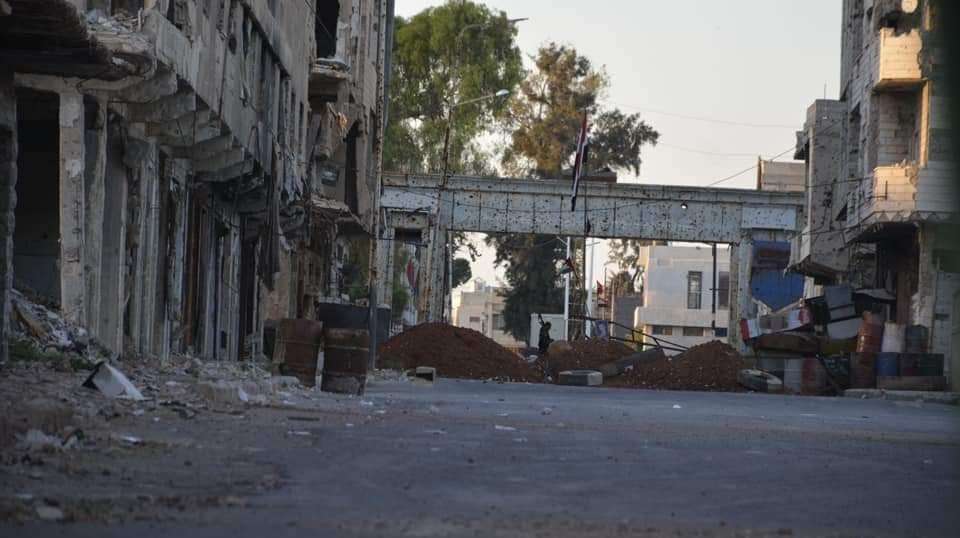 Geneva - The siege imposed by the Syrian government forces on Daraa al-Balad since June 24 would lead to serious humanitarian repercussions if it continues, Euro-Mediterranean Human Rights Monitor said in a statement on July 15, calling for lifting the siege urgently and allowing the entry of basic humanitarian supplies.

Daraa Al-Balad, southern Syria, has been under siege for the past 21 days imposed by the Syrian government forces, which wants to force the opposition fighters to surrender their light and medium weapons and push them to accept the installation of military checkpoints belonging to the Military Security in their areas.

The Syrian government forces isolated the center of Daraa city from the neighborhoods of Daraa al-Balad and cut off all the paths and crossings in its vicinity by closing all roads leading to it, building berms and deploying snipers on high buildings’ roofs.

The closure included the roads leading to Daraa National Hospital, Al-Rahma Hospital, Al-Shifaa Hospital and Al-Hayat Medical Complex in the Al-Mahatta area, which is controlled by government forces. This means leaving the sick and those with humanitarian needs without access to medical facilities except for a single medical center with modest capabilities in the besieged region.

H.K., 26, a resident of Daraa Al-Balad, told Euro-Med Monitor: “Commodities are starting to become scarce and prices are rising dramatically. It has become very difficult to secure basic materials and medicines. We are also living in terror because the regime forces might storm the region and take revenge on the residents, as happened in other areas. Security forces at checkpoints surrounding Daraa al-Balad open machine guns at residential homes daily, and warplanes and helicopters almost never leave the sky.”

According to data collected by Euro-Med Monitor, basic materials and medicines began running out in the region, as parents reported that infant milk has ran out from medical centers and pharmacies. This poses a great danger to about 400 infants, whose age range from several days to a year and a half, in the region. In addition, many types of medicines have run out, especially dialysis and chronic diseases bills, most notably diabetes.

About 11,000 families (40,000 people) live in Daraa al-Balad. They are distributed over several neighborhoods, which are the Golan Camp, the Palestinian Refugee Camp, the Al-Sad Road; and the farms in the Al-Shiyah, Al-Nakhla, Al-Rahiya, and Al-Khawani areas. All these areas suffer from siege and the blocking of basic materials such as medicine, food and fuel.

The residents of the region will not be able to withstand the suffocating of living under siege, as they depend on young men working in other parts of the governorate. However, the government forces stationed all around besieged neighborhoods prevent anyone with an ID that proves that they are from Daraa Al-Balad from leaving the region.

Euro-Med Monitor’s Chief Operations Officer, Anas Aljerjawi, said: “the international community’s silence on these heinous acts encourages the Syrian regime to continue these practices. The regime has not yet felt real pressure to respect the rights of Syrians and stop killing, displacing and punishing them collectively”.

“Directly supervised by the Russian army, the siege comes within the Syrian regime’s subjugation policy, that has been imposed since the outbreak of popular protests in March 2011, which is based on besieging, starving and targeting of the population to punish them for rejecting the regime's policies and for calling for their legitimate demands for freedom and reform.”

The civilians must be spared all forms of conflict and their basic livelihood necessities must be allowed and provided no matter what. The Syrian authorities must stop the policy of starvation and siege against the civilian population.

The truce agreement concluded in July 2018 between the Syrian regime and Russia on the one hand, and the opposition factions in Daraa and its countryside on the other, stipulates that the opposition fighters give up their heavy weapons and keep their medium and light weapons. However, imposing the siege indicates that the government’s requirements to end the siege aim to take revenge on the people and end all manifestations of opposition in the region.

The Syrian government should urgently end the siege imposed on Daraa al-Balad, allow the entry of all necessities for the population, enable them to move outside the region to reach health facilities or workplaces, and refrain from carrying out any military action in the region under any circumstances.

The United Nations should urge the Syrian government to end the policy of siege and targeting of civilian areas, and to activate the UN mechanisms that would pressure the Syrian regime to stop its violations against civilians, respect their rights to a decent life and exercise legitimate freedoms.