Dutch official at Euro-Med’s webinar: “our aim in Libya is peace. Sanctions could work” 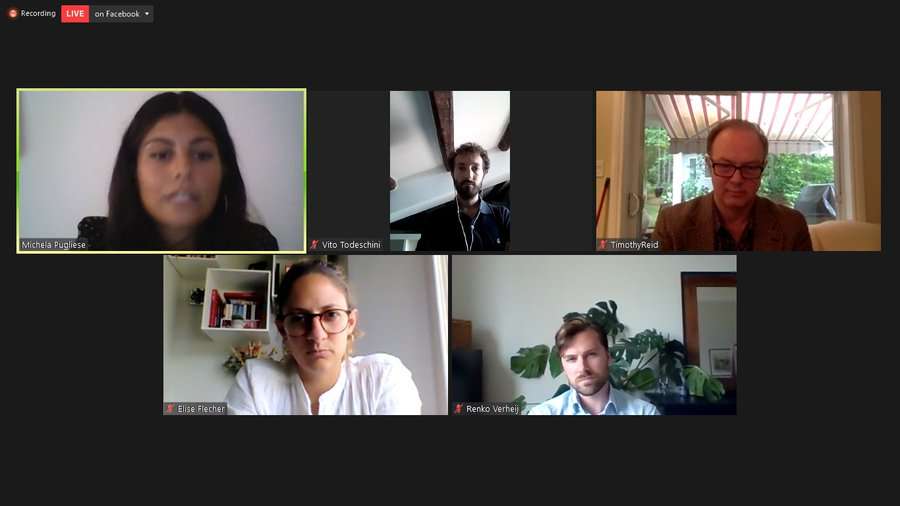 Geneva – The Euro-Mediterranean Human Rights Monitor hosted a topical webinar on transitional justice and impunity in Libya that brought together a group of international experts from leading civil society organizations and the public sector.

The expert panel, titled “Impunity in Libya and the role of the EU and the UN,” addressed possible war crimes and crimes against humanity committed in the course of the ongoing civil war, including mass graves, landmines, torture and killings, in addition to the responsibility of warring parties and their regional and international supporters.

The event, moderated by Euro-Med Monitor's Humanitarian Researcher, Michela Pugliese, was concluded with policy-oriented remarks concerning the United Nations and European Union’s role towards the conflict, including the issue of arm sales.

Timothy Reid, former Senior DDR Advisor for the United Nations Support Mission in Libya (UNSMIL), listed a number of grave and concerning violations in the Libyan conflict, saying, “The properties of Libyan civilians have been seized and used by militants. Different mercenary groups came to Libya… We [also] have the problem of interference in courts' work and tribalism.”

Reid elaborated that some regional groups such as the UAE and France have armed and financed Libyan groups and mercenaries. “One of the areas that does not receive much attention is the role of regional actors such as France, Saudi Arabia and the UAE,” he added “Some European countries are complicit in human trafficking [in Libya] as they claim they prevent migrants from reaching their shores.”

“In terms of accountability, members of the UN Security Council follow their interests, such as selling weapons,” he concluded.

Elise Flecher, a Senior Programmes Officer at Lawyers for Justice in Libya, highlighted that “The human rights consequences of violating the arms embargo resulted in targeting civilian infrastructure, such as the bombing of migrant detention centres, which left 52 migrants dead.” She added that "the conflict has led to people's displacement, especially around Tripoli and conflict-affected areas."

"The conflict has impacted human rights defenders, especially women," she continued, noting that the EU has an ambiguous approach towards Libya. "Violating the arms embargo is well-documented and have had different consequences, and the EU is one of the most known violators of the arms embargo in Libya," she concluded.

Vito Todeschini, a Legal Adviser at the Middle East and North Africa Programme of the International Commission of Jurists, pointed out “The FFM has the mandate to investigate violations related to international human rights law, which means it could look into crimes in Libya such as arbitrary detention, torture, and crimes committed against migrants and IDPs.” He added, “It has the mandate to look into crimes committed against humanity.”

He noted that NGOs had created the FFM to investigate human rights violations by armed groups due to the lack of accountability. “Still, it is important to note that its investigation is not criminal.”

Todeschini suggested that FFM should contribute to transitional justice by sharing the results of investigations with other bodies investigating crimes. "It can provide accountability for human rights violations committed in Libya. Its documentation and findings can be used before domestic bodies to get reparations for victims and to support the work of the African Union and the ICC."

"The FFM can play a major role in Libya, both criminal and non-criminal. But it needs international support and for its mandate to be renewed for hopefully more than one year. Funding should be renewed as well," Todeschini added.

"Our overall aim is peace in Libya in the interest of the Netherlands and the region as a whole. To achieve that, there is one path to it, which is a rights-based and inclusive approach; we support programs on the ground," noted Renko Verheij, senior policy officer at the Middle East and North Africa department of the Dutch Ministry of Foreign Affairs in the Hague. “Another key element in our approach is international sanctions. We should look at the direct results of sanctions and the role it plays in signalling to others. It could work.”

"We are the only country with a constitution that mentions promoting the international legal order, and there is a value to it as well," he noted. "We should remember that without a certain degree of justice, there will be no reconciliation or security," Verheij concluded.