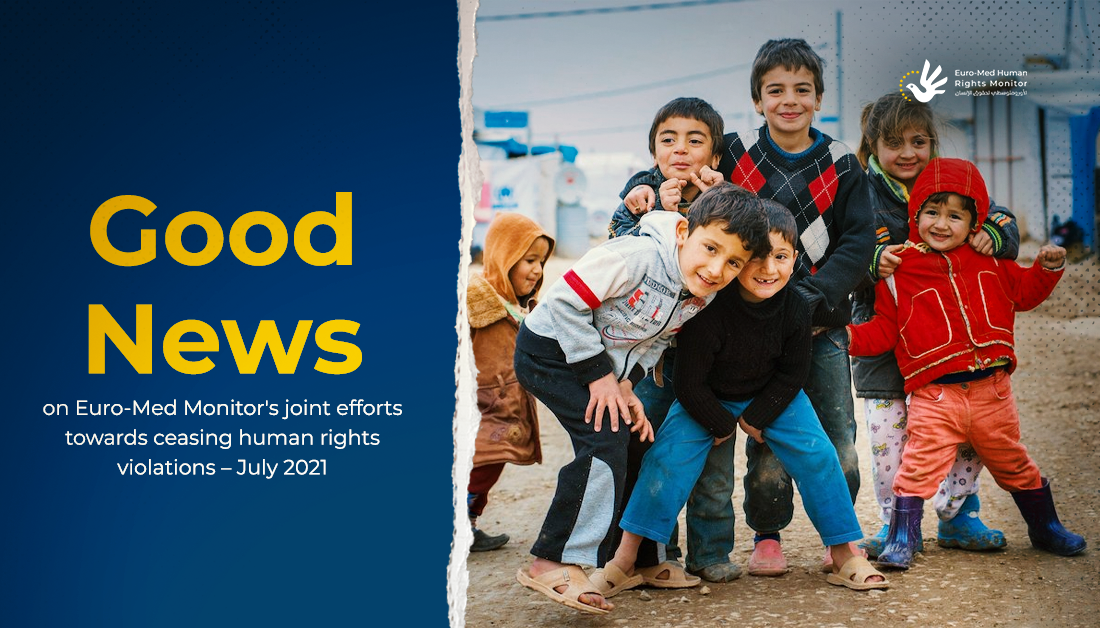 July witnessed unfortunate human rights violations in the Middle East and North Africa (MENA) that threatened the lives of innocent civilians and restricted the public freedoms of individuals, institutions, and journalistic work.

For instance, the Moroccan authorities continued to crack down on journalists and activists and sentenced three people to several years of imprisonment.

In Syria, the government forces imposed a siege on Daraa al-Balad, threatening to starve thousands of Syrian civilians.

In Iraq, fire incidents repeated in government hospitals, as a fire in Al-Hussein Hospital caused the death of more than 85 Iraqis.

In Tunisia, Tunisian President Kais Saied announced the dissolution of the government and the suspension of parliament, in a clear attack on democracy and the right of the Tunisian people to choose their representatives.

Nevertheless, despite the continuous violations, it is crucial to recognize the small steps that, in the long term, will bring considerable improvements towards ending infringements and the redress of victims.

In July, our team worked alongside partner organizations to bring real change in ceasing violations and attacks on fundamental freedoms in both the MENA region and Europe. Now, to our delight, we can deliver some great news about those achievements.

On July 9, the Saudi authorities released Saudi economist Abdul Aziz Al-Dakhil, after arresting him in April 2020 for exercising his right to freedom of expression through social media platforms.

Euro-Med Monitor had carried out a large-scale campaign of pressure and advocacy, in partnership with human rights defenders and academics, to shed light on the issue and urge the Saudi authorities to release him. The campaign included several activities, including sending a letter, signed by about 23 prominent academics from around the world, to the Saudi authorities, and organizing a webinar where rights experts from different countries discussed Al-Dakhil’s detention conditions and the legality of his arrest.

Press release about the letter

Press release about the webinar

On July 24, Iraqi Prime Minister Mustafa al-Kadhimi announced the arrest of the perpetrators of the suicide attack in Sadr City, east of Baghdad, which killed 30 people and wounded more than 50 others.

Since the incident, Euro-Med Monitor, along with partner organizations, has called on the Iraqi authorities to open an immediate and serious investigation to apprehend and hold the perpetrators accountable, in an important step towards achieving justice and ending the state of impunity.

On July 30, French authorities transferred about 400 migrants, including families and unaccompanied minors, from a camp in Place Vosges in central Paris to shelters, just 24 hours after the camp was established.

Along with other human rights organizations, Euro-Med Monitor addressed the countries of the European Union to highlight the difficult conditions experienced by asylum seekers. We urged them to improve the conditions of asylum seekers, especially those living in overcrowded camps and reception centers that are unfit for a decent life, and to accommodate more asylum seekers and distribute the burdens among them.

The Yemeni government announced on July 24 it had ended the evacuation of nearly 600 Yemenis who had been stranded in India due to the COVID-19 outbreak.

Over the past months, Euro-Med Monitor has addressed the concerned Indian and Yemeni authorities to expedite a solution to the problem of Yemenis stranded in India, especially in light of the difficult conditions of the military conflict that Yemen is experiencing.

Along with our partners, our team has intensified its efforts to shed light on the issue and reveal the difficulties Yemenis are experiencing, especially in light of the ongoing war and the inability of many of them to return to their country.