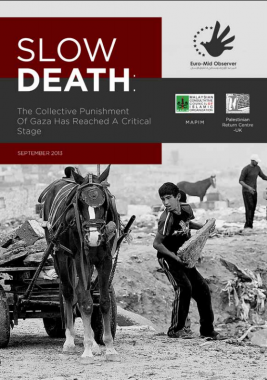 A field report has been issued by the Euro-Med Monitor for Human Rights in cooperation with the Palestinian Return Centre (PRC) in London and the Malaysian Consultative Council of Islamic Organizations (MAPIM). The report cites re-newed and developing grim realities that are imposed by Israel on Gaza in the form of an illegal blockade since 2006.

This field report recapitulates the most recent crisis in Gaza in light of the political “change” in Egypt which negatively affected Gaza. Over the past two months, the populations of Gaza have faced severe shortages in the basic requirements of living conditions within the health sector as well as all other sectors.  The basic food and fuel commodities have been hardly hit as Egypt closed great majority of the tunnels used in smuggling these needs.

Another significant deterioration affected the right of freedom of movement where Egyptian authorities have closed Rafah border crossing; banning constantly tens of thousands from leaving out or into Gaza. International Humanitarian Law holds Israel responsible as well as Egypt for caging over 1.6 million in an open air prison.

The current situation in the Gaza Strip, after Egypt’s full destruction of the lifeline tunnels, is the toughest since December 2008, when Israel launched its full-scale military operation “Cast Lead”.

As of August 2013, over a third (35.5%) of those able and willing to work are unemployed (PCBS) - one of the highest unemployment rates in the world. Economists expect that the continuous closure of the tunnels will lead to a sharp increase in the unemployment level (43% by the end of 2013 compare with 32% in June 2013).

The incessant closure of the tunnels will lead to a 3% decline in the growth by the end of 2013 compared with 15% as of June 2013. Meanwhile, the construction sector is working with less than 15% of its previous capacity leading to more than 30.000 losses in job opportunities since July 2013.

A longstanding electricity deficit, compounded by shortages in fuel needed to run Gaza’s power plant, results in power outages of up to 12 hours a day. Additionally, only a quarter of households receive running water every day, during several hours only, while  over 90% of the water extracted from the Gaza aquifer is unsafe for human consumption.

Some 90 million liters of untreated and partially treated sewage are dumped in the sea off the Gaza coast each day, creating public health hazards. Additionally; the economy has endured severe losses worth of $460 million in all economic sectors within the past two months.

As the occupying power, Israel has a duty under International Humanitarian Law to ensure the welfare of the population of Gaza without discrimination. Israel has failed to uphold the population’s human rights, including the rights to health, to education, to work and to an adequate standard of living, which includes the rights to food and adequate housing. Israel should be held accountable under international law for the collective punishment of an entire population.

The Euro-Med Monitor for Human Rights therefore urgently demands the International Community to help alleviate immediately the blockade on the Gaza Strip.

Please find below the link for Full Report: Here