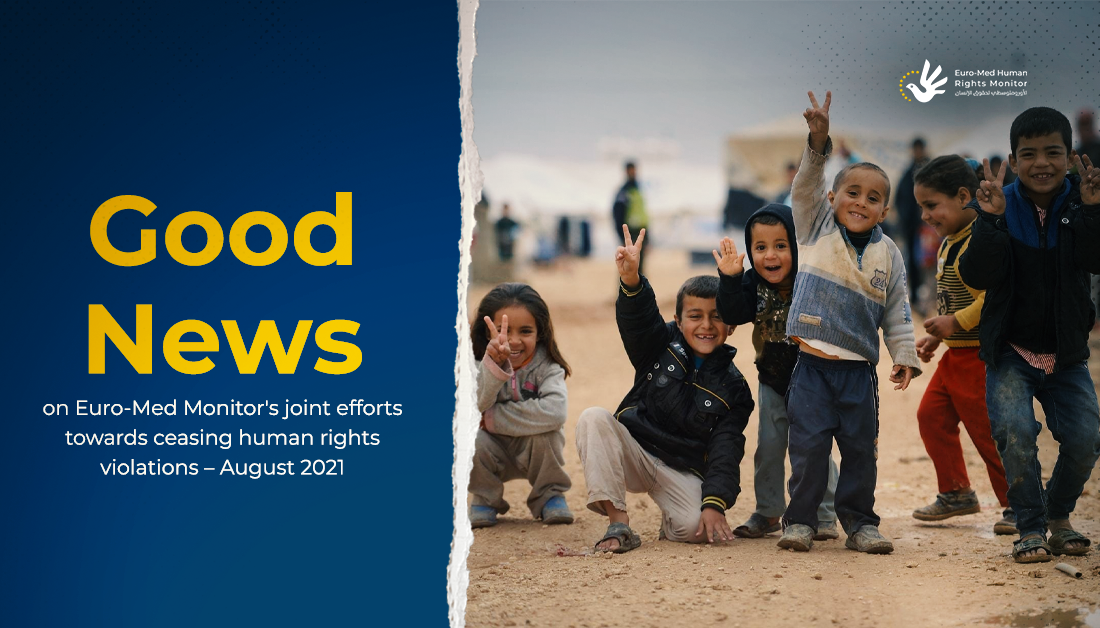 August 2021 was not different from the months before it; governments continued to arrest activists and suppress opponents in violation of their legitimate rights to freedom of opinion and expression and continued to operate outside the law, carrying out enforced disappearances, travel bans, and torture.

In Libya, the security chaos continues to pose a threat to the sovereignty of the state. In Egypt, travel restrictions against activists and opponents have been repeated. In the UAE, human rights violations and torture practices continued in prisons and detention centers, most notably the secret Uyghur prison. In Lebanon, officials’ immunity still allows them to enjoy impunity while the shock of the Beirut Port explosion is still fresh in the minds of the Lebanese.

Nevertheless, despite the continuous violations, it is crucial to recognize the small steps that, in the long term, will bring considerable improvements towards ending infringements and the redress of victims.

In July, our team worked alongside partner organizations to bring real change in ceasing violations and attacks on fundamental freedoms in both the MENA region and Europe. Now, to our delight, we can deliver some great news about those achievements.

On August 17, the head of the Libyan government's office, Reda Faraj Al-Freites, appeared at the government headquarters in Benghazi after he was kidnapped by gunmen for nearly two weeks in the Al-Dahra district of the capital, Tripoli.

Euro-Med Monitor had called on the Libyan government to make all possible efforts to combat kidnappings and enforced disappearances in the country and provide the necessary protection for individuals and government officials, warning of the danger of insecurity on the presence and authority of official institutions in the country.

On the same day, the Egyptian government took another positive step by closing a criminal case against four organizations accused of receiving foreign funds. The names of three activists of these organizations, lawyer Negad El-Borai, Esraa Abdel-Fattah, and Ahmed Ghoneim, were also removed from travel ban lists and watch lists, and their freezing orders were lifted.

On August 30, the President of the United Arab Emirates, Khalifa bin Zayed, issued a federal law establishing a National Human Rights Authority to enhance the UAE’s regional and international standing in human rights, spread a culture of human rights, and raise awareness in society.

On many occasions, Euro-Med Monitor called on the UAE to pay attention to human rights and review its laws and practices that violate human rights and international laws signed to them, most recently about the detention of Uyghurs in a secret prison and the racist treatment of thousands of migrant workers.

On August 31, Judge Tariq Bitar issued a pre-trial arrest warrant against Hani al-Hajj Shehadeh, a former member of the Higher Council of Customs, and one of the officials who knew of a shipment of nitrates in the port.

This step represents remarkable progress in the investigation process, which was frozen for about a year due to the issue of immunities and external obstacles that have reduced the independence of the judiciary.

Euro-Med Monitor had highlighted this in a report entitled “Falling into the Abyss,” calling for the application of the law and the punishment of anyone who violates it.