Leading MEP at Euro-Med Monitor webinar: ‘Asylum seekers are not a threat’ 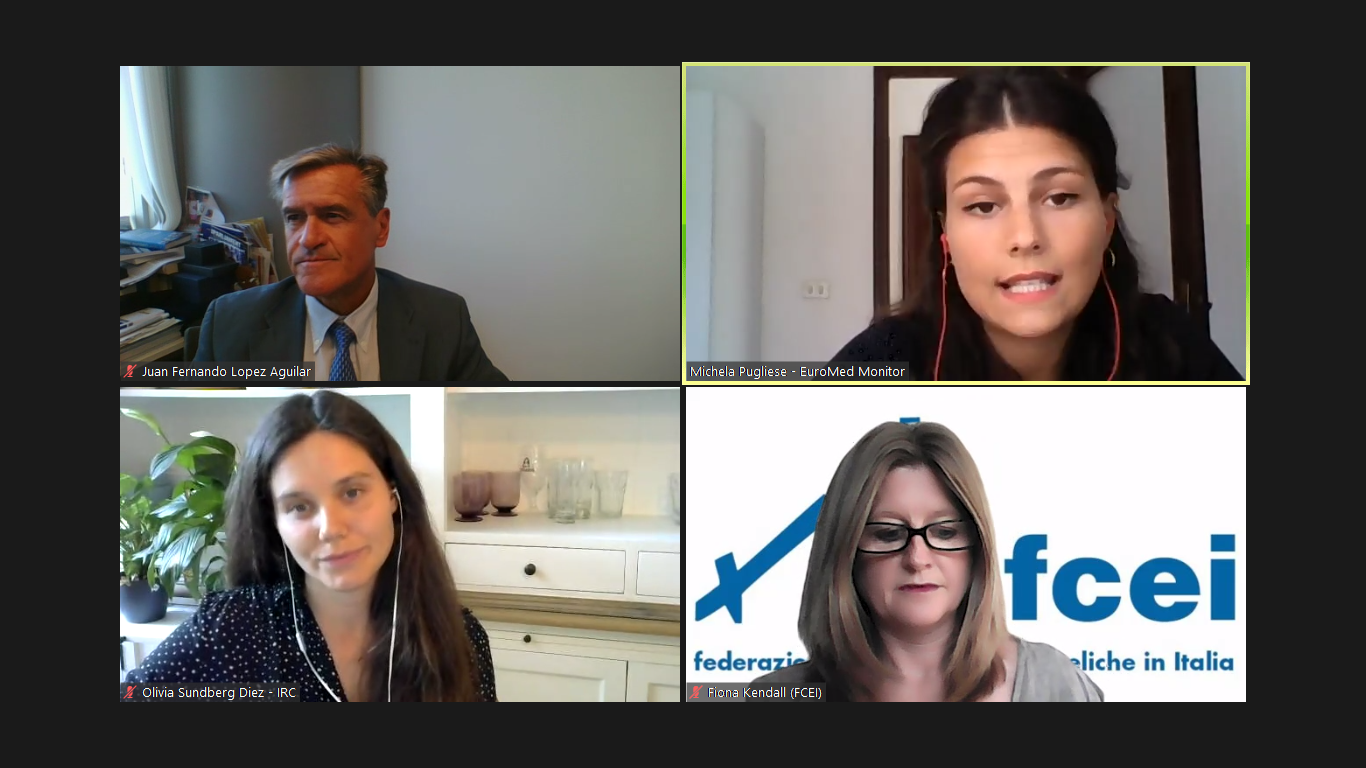 Geneva - Euro-Mediterranean Human Rights Monitor has hosted an important and timely webinar on the need to guarantee legal pathways to seek asylum in Europe that brought together a group of international experts with different backgrounds and unique competence on the topic.

The webinar, titled “Towards safe and legal channels for asylum seekers” and moderated by Euro-Med Monitor's Migration and Asylum Researcher Michela Pugliese, addressed the urgency to provide legal, safe, sustainable and practical pathways for asylum seekers. It discussed in particular the current available, yet limited, methods to arrive in Europe by air, land or sea, mainly the humanitarian corridors, the resettlement programs and the NGOs’ Search and Rescue missions in the Mediterranean.

Lopez Aguilar highlighted that certain Member States are more subjected than others, due to their geographical frontline position, to an overload of their reception capacity and these countries – for instance Italy and Spain – have also deployed public forces to help save lives at sea.

He recalled that, within the EU Parliament, he has repeatedly asked for a common European migration framework, especially for a European Search and Rescue mission, but that it is still not in the Commission’s proposals. “Search and Rescue in the Mediterranean is mostly implemented by NGOs, which are saving lives at sea in the absence of an organized European framework and effort”.

Lopez Aguilar focused on the idea of legal corridors, based on the premise of issuing humanitarian visas from Member State’s embassies and consulates in third countries, and reminded that 95% of the people granted with the refugee status in the past 10 years within the EU arrived here “irregularly” in the first place. “Because they were not given a single chance to make it regularly (...), that it is why they resorted to abandon themselves to criminal organizations of illicit traffickers of human beings (…) and so often they lost their life in the attempt of making it to the European Union,” he said.

“It is obvious that the response of the European Union for now is not satisfactory, that there is a fight worth fighting, that we have to do better, much better, to open legal pathways, humanitarian corridors, humanitarian visas, relocations and resettlements. [All] finally put in place for each and every Member State,” he concluded.

Olivia Sundberg Diez, Policy and Advocacy Advisor at the International Rescue Committee, highlighted that “The overall picture of Europe is one of growing protection gap with routes to safety falling far behind rising humanitarian needs and what is actually needed in terms of safe and legal pathways to protection”.

“Over the past few years, we’ve seen greater places being made available in Europe, in particular shortly after 2015, yet last year resettlement globally fell to the lowest level in two decades. In Europe less than 10,000 people were resettled last year, which fell far shorter to the commitment that has been made to resettle 30,000 people,” she said.

Sandberg-Diez also noted that European states’ involvement in refugee resettlement varies widely, with some countries like Sweden, Germany and France respecting their programs and resettling several thousand refugees each year, while other countries have downscaled or suspended their schemes or are still not involved at all. “States need to guarantee a predictable and secure access to protection after arrival in Europe because right now we are seeing very different response from different member states”.

Tackling the Afghan humanitarian crisis, she stated, “We have seen many European countries adopt a strong restrictive approach in response to the situation in Afghanistan, and Europe in general is lagging behind other regions in terms of offering protection”.

“It is crucial that states invest into the right things and learn the rights lessons from this humanitarian emergency, and this means investing into dignified, appropriate and efficient reception facilities, ensuring adequate resources for asylum process (…) and coordinating efforts to host asylum seekers in the spirit of responsibility-sharing in the Union” she remarked.

Fiona Kendall, European and Legal Affairs Advisor for Humanitarian Hope, pointed out that the humanitarian corridors managed by FCEI and the Sant’Egidio Community since 2015 have brought safely and legally over 2,000 refugees up to now in Italy, with many more arriving in the next two years. “It’s a scheme that has proven its replicability”.

She noted that over the years the term “humanitarian corridor” has been misused and hijacked and highlighted that this is “not simply a generic term to describe an airlift or an evacuation program”. She pointed out that the term refers as well to the legal entry into the host country, via humanitarian or other visa, comprehensive pre-departure and post-arrival support and accompaniment, and also integration. “It’s a package, and it can be ensured only if there is a multi-stakeholder partnership in place, which includes governments and different members of the civil society,” she said.

She explained that, at the moment, humanitarian corridors cannot be implemented in Afghanistan, especially due to the lack of negotiations with the Taliban and the unsafe situation there, but that they could be done in neighbouring countries like Iran, Pakistan and Bosnia.

She concluded by underlining the flexibility of the humanitarian corridors’ tool, “particularly in relation to eligibility criteria, which can go beyond the strict definition of refugee within the Geneva Convention” and stressing that “the greatest incentive to irregular migration is the absence of legal pathways”.