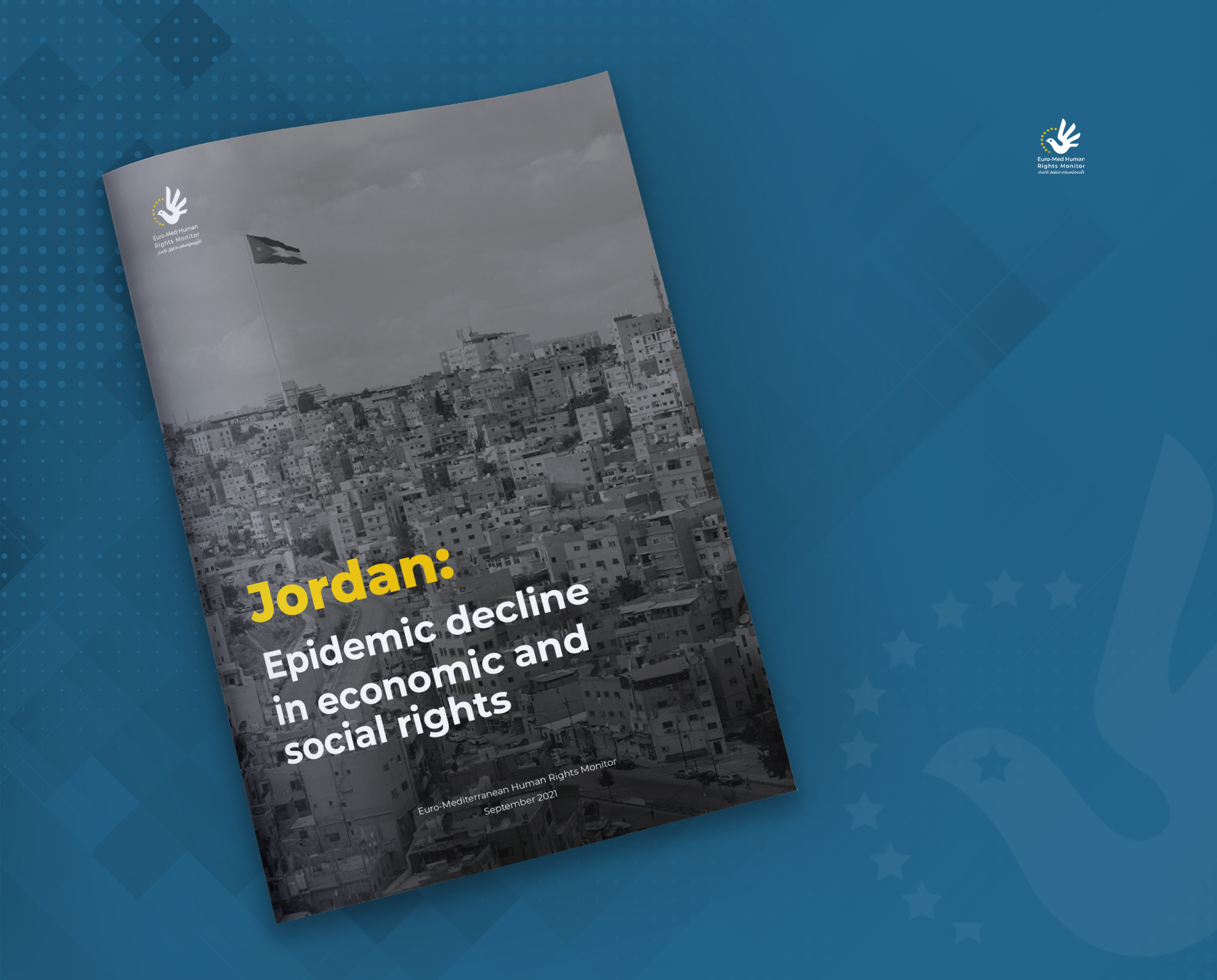 Geneva - The Euro-Mediterranean Human Rights Monitor said in a report issued today that the crises Jordanians have been experiencing in recent years have reflected on their exercise of economic and social rights, including the right to dignity, work, health, education, water, and the formation of unions.

Titled “Jordan...Epidemic decline in economic and social rights,” the report reviews the difficult conditions that have occurred in the Hashemite Kingdom of Jordan in recent years as a result of the decline in economic activity, the exacerbation of the Coronavirus repercussions, the decline in financial aid provided to refugees in the kingdom, the corruption and tax evasion suspicions, and the increase in public debt.

The report was based -in addition to research and documentation efforts- on questionnaires targeting random samples and tens of field interviews conducted by Euro-Med Monitor’s field team in Jordan from June 2020 until the end of August 2021. The questionnaires included citizens whose economic conditions impeded their exercise of basic rights and provided detailed information about the causes and the impact of the crises on Jordanians’ living conditions, as well as the state's policies to face these crises.

Although Jordan suffers from several crises, such as the dissolution of unions, the water, health sector, and societal violence crises, the repercussions of the Coronavirus pandemic contributed to the disruption of economic activity in the Kingdom, which had the greatest negative impact on the lives of Jordanians.

In 2020, trade disruptions and the unprecedented decline in international tourism rates caused the contraction rate of the Jordanian economy to reach 1.6%, which is the first economic contraction in the Kingdom in three decades.

In reference to the health sector crisis, the report shows that Jordan suffers from a shortage of medical personnel in most of its governmental hospitals, which has resulted in a decline in the level of medical services provided to patients and the recurrence of deaths in hospitals due to the poor services provided to patients. Perhaps the most prominent example of this was the Salt Hospital incident in March 2021, when seven COVID-19 patients died after the hospital they were in ran out of oxygen.

The report dealt with the union crisis as one of the crises that the Kingdom has faced during the past two years, as the government closed the Jordanian Teachers’ Syndicate (JTS) on July 25, 2020, after teachers protested against the non-disbursement of a financial bonus to them in light of the stifling economic crisis in the country. The feud between the government and JTS is still ongoing.

The legal researcher at the Euro-Med Monitor, Omar Al-Ajlouni, said, “the Jordanian government is obligated under Article 25 of the Universal Declaration of Human Rights to guarantee individuals the right to a decent standard of living sufficient to ensure the health and well-being of themselves and their families, especially in terms of food, clothing, housing, medical care, and necessary social services.”

The Jordanian authorities should develop a national policy to deal effectively with these crises, especially those related to poverty, unemployment, and societal violence resulting from them, and stop the violations that limit the freedom of union work for both institutions and activists.

The international community should call on the Jordanian authorities to abide by their international commitments regarding respect to the economic and social rights of their citizens and provide them with support through international organizations, such as UNICEF, FAO, and the International Labor Organization, through development projects to reduce poverty, unemployment, and child labor.