Libya: Security forces kill migrant, detain 4,000 others in one day 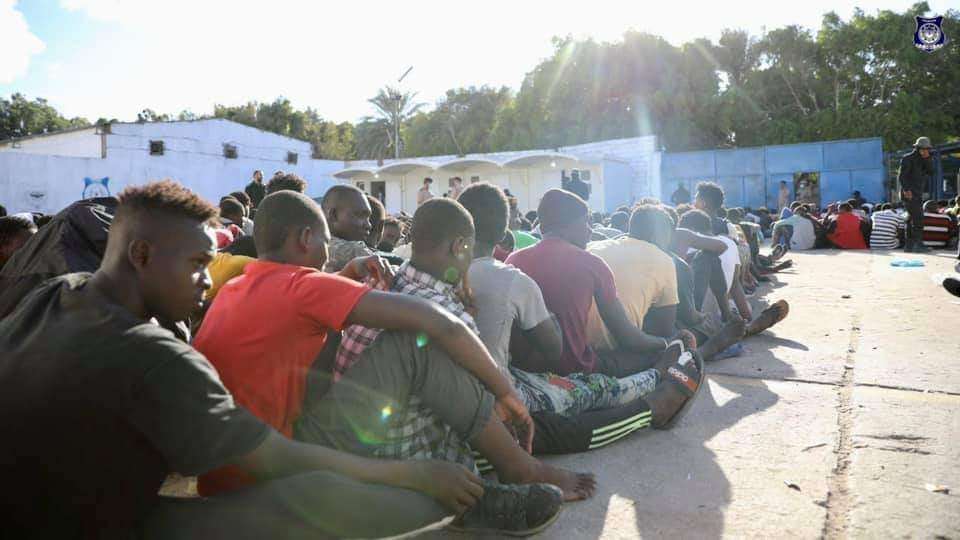 A group of migrants at the collection and return center belonging to the Directorate for combating Illegal Migration in Tripoli - Libya| Source: Twitter - Ahmed Khalifa| October 2, 2021
Oct 04,2021 Libya
Share On Copied
FR | AR

Geneva – The Libyan security forces killed one African migrant and wounded others during a large-scale security campaign, in which thousands of migrants and refugees were arrested in the Gargaresh area of ​​the capital, Tripoli, Euro-Mediterranean Human Rights Monitor said today in a statement.

Euro-Med Monitor received information that an African migrant (of unknown nationality) was killed, while more than 20 others were injured, some of them in critical condition, and thousands of others were arrested during a security campaign carried out by the Libyan Ministry of Interior on Friday morning, in the Andalus neighborhood in the Gargaresh area of Tripoli.

The collection and return center in the Ghout al-Shaal region received about 4,000 migrants and refugees of African nationalities on Friday, following the campaign that the ministry said aimed to "raid the hideouts of criminals in the Gargaresh area," claiming that these places are used to spread drugs and alcohol and harbor illegal migrants.

Euro-Med Monitor reviewed photos, videos, and testimonies published by eyewitnesses, documenting the use of excessive violence by the security forces in dealing with migrants and refugees. This includes beatings, humiliation, and violent storming of homes by breaking doors, in addition to detaining thousands of migrants and refugees, including women and children, in poor, degrading, and inhumane conditions.

The Libyan Prime Minister's announced the implementation of what he described as a "planned security operation to eliminate the largest drug manufacturing and selling dens in the Gargaresh region," but he apparently ignored the serious violations committed by the security forces against migrants who were residing in the area.

A number of detainees are registered with the UNHCR in Libya, and they hold official papers, but the security forces did not respect their status and treated them as outlaws, Euro-Med Monitor learned.

The detention of about 4,000 migrants, including women and children, in addition to violating Libyan laws, clearly violates the legal principle established in the texts of international laws and local laws regarding the principle of the individualization of punishment and falls within the practices of collective punishment that are prohibited in all circumstances.

This year witnessed a noticeable increase in incidents targeting migrants in Libya. The authorities carry out periodic campaigns in which thousands are held in detention centers that do not meet the minimum humanitarian standards, which has caused the death of a number of detained migrants as a result of medical negligence and illegal practices, the last of whom was a Syrian detainee who died a detention center in Tripoli.

Youssef Salem, legal researcher at Euro-Med Monitor, said, “The use of unjustified violence against migrants and refugees and the detention of more than 4,000 in one day shed light on the grim reality of migrants in Libya and the official policies followed to dehumanize them. This clearly violates the protection provided to them under international law.”

“Libya has the right to fight crime and drugs and work to control the security situation in the country, but this cannot justify persecution against vulnerable migrants and refugees and their illegal treatment, especially in light of the almost complete absence of a real follow-up on the conditions of migrants by the embassies of their countries in Libya."

The Libyan government should open an investigation into the serious violations that accompanied the security campaign in Tripoli and ensure that those involved in the killing of the African migrant and all other violations committed by the security forces against migrants during the campaign are held to account.

The government should also release detained migrants and refugees who have not been proven guilty of acts punishable by law, respect the rights and human dignity of migrants, treat them according to the relevant provisions of international law, and stop illegally targeting them collectively.

The United Nations Mission in Libya and the Office of the High Commissioner for Human Rights should take action and push the Libyan authorities to investigate the abuses accompanied the security campaign, review the authorities’ policy towards migrants and refugees in the country, work to protect the rights of migrants, and follow up on their conditions.