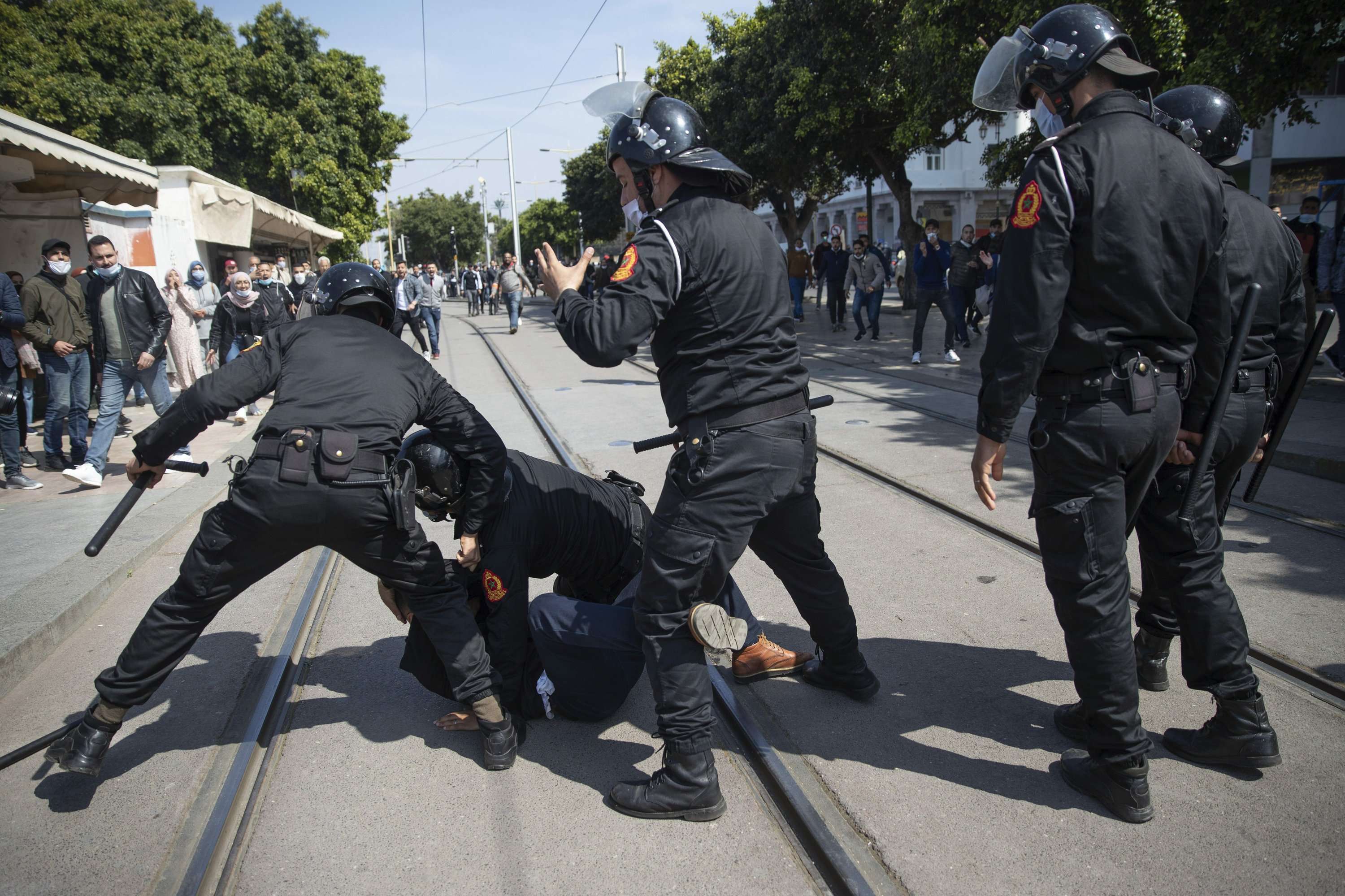 Geneva – Moroccan security services arresting teachers for participating in a sit-in in the capital, Rabat, rings alarm bells about the freedom situation under the new government. The authorities should release the detainees immediately and respect the right to freedom of opinion, expression, and peaceful assembly.

The security forces tried to thwart a peaceful assembly organized by the National Coordination Committee of “forcibly contracted teachers” in Rabat on October 14. The forces initially tried to scare the crowds away with a massive security presence. Then they forcibly dispersed protesting teachers and detained 16 of them, who were taken to nearby detention centers for interrogation.

Euro-Med Monitor viewed videos showing Moroccan security personnel assaulting protesting teachers with beatings and violent practices during their pursuit as well as dispersing detainees and throwing them to the ground in a humiliating way.

In 2017, the Moroccan government launched a public sector employment program that offers a two-year renewable contract. It was first implemented in the education sector. Since that time, contractual teachers have been demanding permanent appointments, integration into the public sector, and full public service privileges.

The number of contractual teachers in Morocco exceeds 100,000, and they constantly organize peaceful protests, but the Moroccan government uses various security methods to thwart these demonstrations and does not show positive intentions to deal with the issue outside security contexts, which weakens the opportunities of reaching solutions in the near future.

Legal researcher at Euro-Med Monitor, Youssef Salem, said, "The last five years in Morocco have witnessed the succession of three different governments. What they have in common is the violent security dealings with peaceful protests, especially the movement of contractual teachers, in contravention of all its constitutional duties relating to respect for rights and freedoms.”

“The suppression of the demonstration of contractual teachers, days after the inauguration of the new government headed by Aziz Akhannouch, gives negative impressions about the new government's respect for public rights and freedoms and reduces the credibility of official promises to improve the human rights situation in the country,” Salem said.

The Moroccan Constitution of 2011 clearly guarantees the right to peaceful assembly and demonstration, as Article 29 of it states, “The freedoms of reunion, of assembly, of peaceful demonstration, of association and syndical and political membership, are guaranteed. The law establishes the conditions of the exercise of these freedoms.”

The Moroccan government should release the detained teachers, open an official investigation into the incidents of abuse that accompanied the suppression of the teachers' demonstration, and hold the leaders and security forces responsible for these incidents to account.

The government should abandon security solutions in dealing with contractual teachers and adopt dialogue with bodies that represent them to reach solutions that guarantee their right to stability and job security.