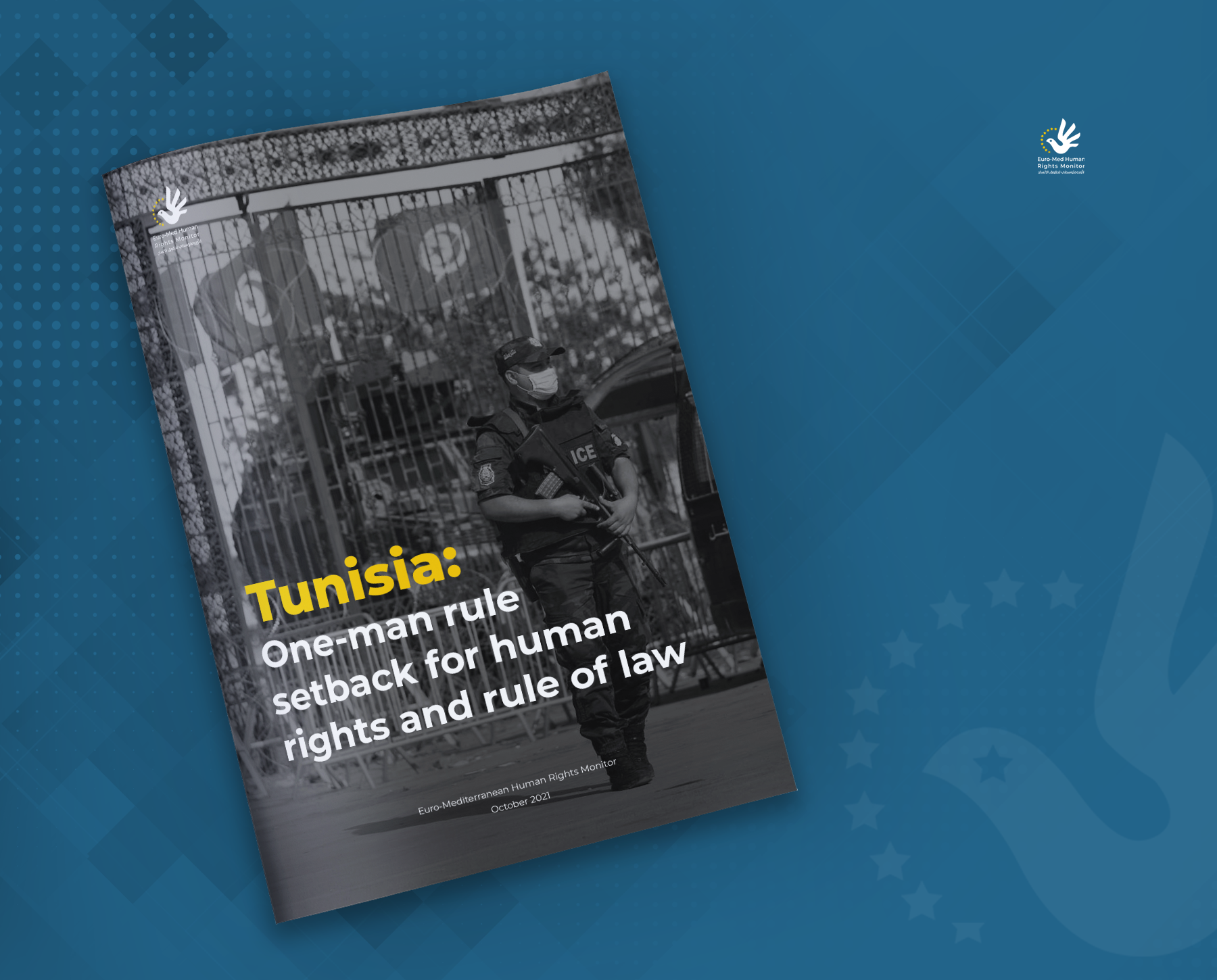 The report, entitled “Tunisia: One-man rule setback for human rights and rule of law,” examined the presidential decisions’ impact on the rights and freedoms of the population under international covenants and charters ratified by Tunisia. The report also provides recommendations to end the state of concentration of powers in the hands of the Tunisian President in a manner that guarantees the protection of rights and freedoms.

In addition to the research and documentation efforts that lasted more than three months, the report was based on dozens of field interviews conducted by Euro-Med Monitor’s field team with a number of victims of the violations and the lawyers of a group of them. The interviews helped make a clear understanding of the reality produced by government practices and their impact on the freedom situation in the country that was witnessing a rare democratic structure in the region.

Although the Tunisian constitution guarantees the right to expression and publication, the report documented dozens of abuses carried out by the Tunisian security services against parliamentarians and political and human rights activists for rejecting the presidential measures and criticizing the president’s behavior in dealing with the crisis. These abuses sometimes amounted to physical assault, arrest, and conviction on vague charges.

The report dealt with the restrictions imposed by the authorities on the rights of individuals to freedom of movement and travel, restricting the movement of a number of judges and activists of the various political parties in the country. According to the report, since July 25, the Tunisian authorities have imposed house arrests on about 13 Tunisians and prevented a number of others from traveling without informing them of clear judicial warrants, including parliamentarians, judges, senior public officials, and businessmen.

The report stated that after the presidential procedures, eight civilians were tried before the military court, although the Tunisian constitution obliges the authorities to submit them to the civilian judiciary to verify the validity of the accusations against them and limit the jurisdiction of the military courts to crimes marked as military crimes. However, the government chose this way to punish opponents.

"The Tunisian president’s practices after declaring the exceptional measures, as well as his previous presidential decisions through which he granted himself powers that he should not possess, constitute a grave violation of the provisions of the 2014 Tunisian constitution," legal researcher at Euro-Med Monitor, Youssef Salem, said.

The report recommended repealing the presidential measures, those announced on July 25, and all the orders and decisions resulting from them, including the security and judicial prosecution of parliamentarians and political and human rights activists for expressing their opinions, and the opportunity to exercise the right to publish without restriction.

The Tunisian government should separate the executive, legislative, and judicial powers in accordance with Tunisia's 2014 constitution and not concentrate them in the hands of a single person or body. International human rights standards, including the International Covenant on Civil and Political Rights, which Tunisia has ratified, should be respected.